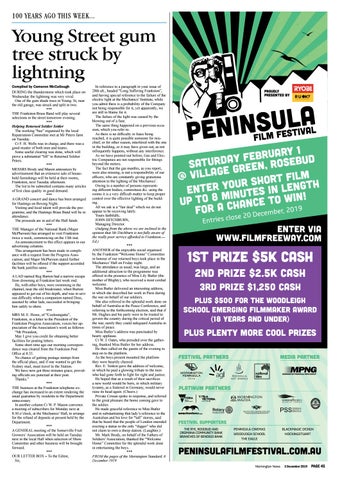 Young Street gum tree struck by lightning Compiled by Cameron McCullough DURING the thunderstorm which took place on Wednesday the lightning was very vivid. One of the gum shade trees in Young. St, near the old garage, was struck and split in two. *** THE Frankston Brass Band will play several selections in the street tomorrow evening. *** Helping Returned Soldier Settler The working “bee” organised by the local Repatriation Committee met at Mr Peters farm on Tuesday. Cr F. H. Wells was in charge, and there was a good muster of both men and teams. Some useful clearing was done, which will prove a substantial “lift” to Returned Soldier Peters. *** MESSRS Brody and Mason announces by advertisement that an extensive sale of household furnishings will be held at their rooms, Frankston, next Tuesday afternoon. The list to be submitted contains many articles of first class quality in good demand. *** A GRAND concert and dance has been arranged for Hastings on Boxing Night. Visiting and local talent will provide the programme, and the Hastings Brass Band will be in attendance. The proceeds are in aid of the Hall funds. *** THE Manager of the National Bank (Major McPherson) has arranged to visit Frankston twice a week, commencing on the 13th inst. An announcement to this effect appears in our advertising columns. This arrangement has been made in compliance with a request from the Progress Association, and Major McPherson stated further facilities will be offered if the support accorded the bank justifies same. *** A LAD named Reg Burton had a narrow escape from drowning at Frankston last week end. He, with other boys, were swimming in the channel, near the old breakwater, when Burton appeared to get out of his depth, and was in serious difficulty when a companion named Dess, assisted by other lads, succeeded in bringing him safely to shore. *** MRS M. E. Howe, of “Cooloongatta”, Frankston, in a letter to the President of the Frankston Progress Association, voices her appreciation of the Association’s work as follows: “Mr President, May I give you credit for obtaining better facilities for posting letters. Some short time ago our morning correspondence was cleared from the Frankston Post Office at 8.55. No chance of getting postage stamps from the official place, and if one wanted to get the Sydney mail, must travel to the Station. We have now got three minutes grace, providing officials are punctual at their post. Thanks.” *** THE business at the Frankston telephone exchange has increased to an extent rendering the usual guarantee by residents to the Department unnecessary. In another column Cr W. P. Mason convenes a meeting of subscribers for Monday next at 8.30 o’clock, at the Mechanics’ Hall, to arrange for the refund of deposits at present held by the Department. *** A GENERAL meeting of the Somerville Fruit Growers’ Association will be held on Tuesday next in the local Hall when selection of Show Committee and other business will be brought forward. *** OUR LETTER BOX – To the Editor, Sir,

In reference to a paragraph in your issue of 28th ult., headed “Long Suffering Frankston”, and having special reference to the failure of the electric light at the Mechanics’ Institute, while you admit there is a probability of the Company not being responsible for it, yet apparently, we are still to blame for it. The failure of the light was caused by the blowing out of a fuse. The same thing happened on a previous occasion, which you refer to. As there is no difficulty in fuses being reached, it is quite possible someone for mischief, or for other reason, interfered with the one in the building, or it may have given out, as not infrequently happens, without any interference. As we have pointed out before, Gas and Electric Companies are not responsible for fittings beyond the meters. The fact that the gas mantles, as you report, were also missing, is not a responsibility of our officers, who are constantly giving gratuitous attention to the lighting of the Mechanics’. Owing to a number of persons representing different bodies, committees &amp;c. using the rooms it is a very difficult matter to keep proper control over the effective lighting of the building. All we ask is a “fair deal” which we do not appear to be receiving lately. Yours faithfully, JOHN DITCHBURN, Managing Director. (Judging from the above we are inclined to the opinion that Mr Ditchburn is not fully aware of the really poor service afforded to Frankston.— Ed.) *** ANOTHER of the enjoyable social organised by the Frankston “Welcome Home” Committee in honour of our returned boys took place in the Mechanics’ Hall on Friday night. The attendance as usual, was large, and an additional attraction to the programme was offered in the presence of Miss Lily Butler (the mother of Blighty), who received a most cordial welcome. Miss Butler delivered an interesting address, in which she described her work in Paris during the war on behalf of our soldiers. She also referred to the splendid work done on behalf of Australia at the Peace Conference, and referring to the forthcoming election, said that if Mr. Hughes and his party were to be trusted to govern the country during the critical period of the war, surely they could safeguard Australia in times of peace. Miss Butler’s address was punctuated by hearty applause. Cr W. J. Oates, who presided over the gathering, thanked Miss Butler for her address. He then called on the guests of the evening to step on to the platform. As the boys present mounted the platform they were heartily cheered. Rev. E. Tonkin gave the address of welcome, in which he paid a glowing tribute to the men who had gone forth to fight for right and justice. He hoped that as a result of their sacrifices a new world would be born, in which military tyranny, as a fostered in Germany, would never raise its head again. (Cheers.) Private Cowan spoke in response, and referred to the great pleasure the home coming gave to the soldier. He made graceful reference to Miss Butler and in substantiating that lady’s reference to the Australian and his love for “tall” stories, said that he heard that the people of London intended erecting a statue to the only “digger” who did not claim to own a sheep station. (Laughter.) Mr. Mark Brody, on behalf of the Fathers of Soldiers’ Association, thanked the “Welcome Home” Committee for the splendid work done in entertaining the boys. *** FROM the pages of the Mornington Standard, 6 December 1919