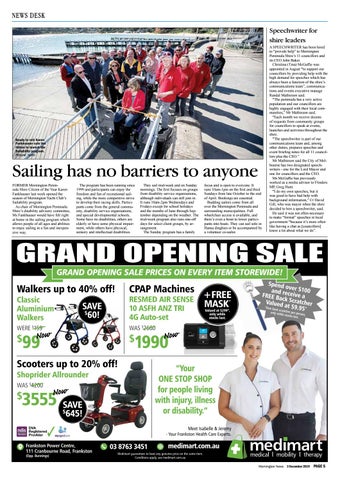 The program has been running since 1999 and participants can enjoy the freedom and fun of recreational sailing, while the more competitive strive to develop their racing skills. Participants come from the general community, disability service organisations, and special developmental schools. Some have no disabilities, others are elderly or have some physical impairment, while others have physical, sensory and intellectual disabilities.

They sail mid-week and on Sunday mornings. The first focuses on groups from disability service organisations, although individuals can still join in. It runs 10am-2pm Wednesdays and Fridays except for school holidays and the months of June through September depending on the weather. The mid-week program also runs one-off days for select client groups, by arrangement. The Sunday program has a family

focus and is open to everyone. It runs 10am-1pm on the first and third Sundays from late October to the end of April. Bookings are essential. Budding sailors come from all over the Mornington Peninsula and surrounding municipalities. Full wheelchair access is available, and there’s even a hoist to lower participants into boats. They can sail solo in Hansa dinghies or be accompanied by a volunteer co-sailor.

A SPEECHWRITER has been hired to “provide help” to Mornington Peninsula Shire’s 11 councillors and its CEO John Baker. Christina (Tina) McGuffie was appointed in August “to support our councillors by providing help with the high demand for speeches which has always been a function of the shire’s communications team”, communications and events executive manage Randal Mathieson said. “The peninsula has a very active population and our councillors are highly engaged with their local communities,” Mr Mathieson said. “Each month we receive dozens of requests from community groups for councillors to speak at events, launches and activities throughout the shire. “The speechwriter is part of our communications team and, among other duties, prepares speeches and event briefing notes for all 11 councillors plus the CEO.” Mr Mathieson said the City of Melbourne has two designated speechwriters - one for the Lord Mayor and one for councillors and the CEO. Ms McGuffie has previously worked as a media advisor to Flinders MP, Greg Hunt. “I do my own speeches, but it was good to have had help with background information,” Cr David Gill, who was mayor when the shire decided to hire a speechwriter, said. He said it was not often necessary to make “formal” speeches in local government “because it’s more often like having a chat as [councillors] know a lot about what we do”.