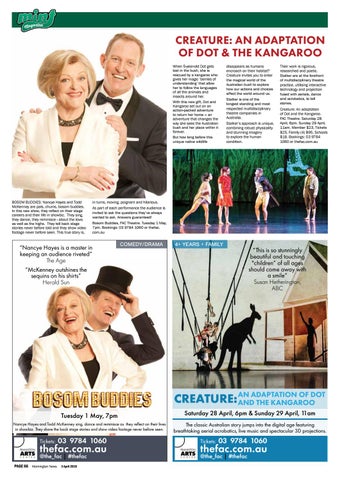 CREATURE: AN ADAPTATION OF DOT & THE KANGAROO When 5-year-old Dot gets lost in the bush, she is rescued by a kangaroo who gives her magic ‘berries of understanding’ that allow her to follow the languages of all the animals and insects around her. With this new gift, Dot and Kangaroo set out on an action-packed adventure to return her home – an adventure that changes the way she sees the Australian bush and her place within it forever. But how long before this unique native wildlife

BOSOM BUDDIES: Nancye Hayes and Todd McKenney are pals, chums, bosom buddies. In this new show, they reflect on their stage careers and their life in showbiz. They sing, they dance, they reminisce - about the lows as well as the highs. They tell back stage stories never before told and they show video footage never before seen. This true story is,

disappears as humans encroach on their habitat? Creature invites you to enter the magical world of the Australian bush to explore how our actions and choices affect the world around us. Stalker is one of the longest standing and most respected multidisciplinary theatre companies in Australia. Stalker’s approach is unique, combining robust physicality and stunning imagery to explore the human condition.

in turns, moving, poignant and hilarious. As part of each performance the audience is invited to ask the questions they’ve always wanted to ask. Answers guaranteed! Bosom Buddies, FAC Theatre. Tuesday 1 May, 7pm. Bookings: 03 9784 1060 or thefac. com.au

CREATURE: Tuesday 1 May, 7pm Nancye Hayes and Todd McKenney sing, dance and reminisce as they reflect on their lives in showbiz. They share the back stage stories and show video footage never before seen.

Their work is rigorous, researched and poetic. Stalker are at the forefront of multidisciplinary theatre practice, utilising interactive technology and projection fused with aerials, dance and acrobatics, to tell stories. Creature: An adaptation of Dot and the Kangaroo. FAC Theatre. Saturday 28 April, 6pm. Sunday 29 April, 11am. Member $23, Tickets $25, Family (4) $95, Schools $18. Bookings: 03 9784 1060 or thefac.com.au

“This is so stunningly beautiful and touching "children” of all ages should come away with a smile” Susan Hetherington, ABC

AN ADAPTATION OF DOT AND THE KANGAROO