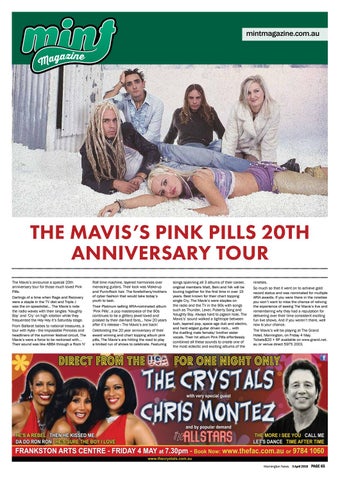 THE MAVIS’S PINK PILLS 20TH ANNIVERSARY TOUR The Mavis’s announce a special 20th anniversary tour for those much loved Pink Pills. Darlings of a time when Rage and Recovery were a staple in the TV diet and Triple J was the on speed-dial… The Mavis’s rode the radio waves with their singles ‘Naughty Boy’ and ‘Cry’ on high rotation while they frequented the Hey Hey it’s Saturday stage. From Ballarat babes to national treasures, a tour with Kylie - the Impossible Princess and headliners of the summer festival circuit, The Mavis’s were a force to be reckoned with… Their sound was like ABBA through a Rock N’

Roll time machine, layered harmonies over menacing guitars. Their look was Make-up and Punk-Rock hair. The forefathers/mothers of cyber fashion that would take today’s youth to task. Their Platinum selling ARIA-nominated album ‘Pink Pills’, a pop masterpiece of the 90s continues to be a glittery jewel loved and praised by their die-hard fans… Now 20 years after it’s release - The Mavis’s are back! Celebrating the 20 year anniversary of their award winning and chart topping album pink pills, The Mavis’s are hitting the road to play a limited run of shows to celebrate. Featuring

songs spanning all 3 albums of their career, original members Matt, Beki and Nik will be touring together for the first time in over 15 years. Best known for their chart topping single Cry, The Mavis’s were staples on the radio and the TV in the 90s with songs such as Thunder, Lever, Puberty Song and Naughty Boy. Always hard to pigeon hole, The Mavis’s’ sound walked a tightrope between lush, layered pop, space age dub and electro, and hard edged guitar driven rock… with the duelling male female/ brother sister vocals. Their hit album Pink Pills effortlessly combined all these sounds to create one of the most eclectic and exciting albums of the

nineties. So much so that it went on to achieve gold record status and was nominated for multiple ARIA awards. If you were there in the nineties you won’t want to miss the chance of reliving the experience of seeing The Mavis’s live and remembering why they had a reputation for delivering over their time consistent exciting fun live shows. And if you weren’t there, well now is your chance. The Mavis’s will be playing at The Grand Hotel, Mornington, on Friday 4 May. Tickets$20 + BF available on www.grand.net. au or venue direct 5975 2001

FOR ONE NIGHT ONLY

and by popular demand