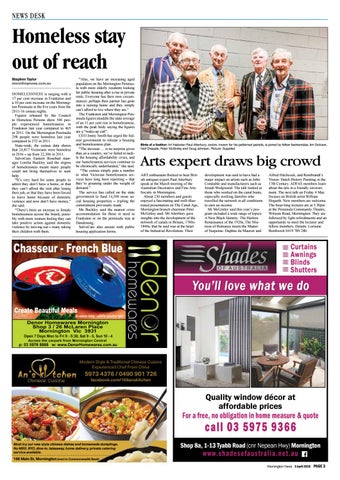 Homeless stay out of reach Stephen Taylor steve@mpnews.com.au HOMELESSNESS is surging with a 17 per cent increase in Frankston and a 10 per cent increase on the Mornington Peninsula in the five years from the 2011-16 census nights. Figures released by the Council to Homeless Persons show 546 people experienced homelessness in Frankston last year compared to 465 in 2011. On the Mornington Peninsula 298 people were homeless last year compared to 272 in 2011. State-wide, the census data shows that 24,817 Victorians were homeless in 2016 – up from 22,306 in 2011. SalvoCare Eastern Rosebud manager Loretta Buckley said the stigma of homelessness meant many people could not bring themselves to seek help. “It’s very hard for some people to admit they don’t have a home, or that they can’t afford the rent after losing their job, or that they have been forced to leave home because of domestic violence and now don’t have money,” she said. “There’s been an increase in female homelessness across the board, possibly with more women feeling they can take positive action against domestic violence by moving out – many taking their children with them.

“Also, we have an increasing aged population on the Mornington Peninsula with more elderly residents looking for public housing after a rise in private rents. Everyone has their own circumstances: perhaps their partner has gone into a nursing home and they simply can’t afford to live where they are.” The Frankston and Mornington Peninsula figures straddle the state average of an 11 per cent rise in homelessness, with the peak body saying the figures are a “wake-up call”. CEO Jenny Smith has urged the federal government to release a housing and homelessness plan. “The increase … is no surprise given that, as a country, we’ve failed to tackle the housing affordability crisis, and our homelessness services continue to be chronically underfunded,” she said. “The census simply puts a number to what Victorian homelessness services have long been reporting – that they’re groaning under the weight of demand.” The service has called on the state government to fund 14,500 more social housing properties – tripling the commitment previously made. Ms Buckley said the nearest crisis accommodation for those in need in Frankston or on the peninsula was at Dandenong. SalvoCare also assists with public housing application forms.

Arts expert draws big crowd ART enthusiasts flocked to hear British antiques expert Paul Atterbury speak at the March meeting of the Australian Decorative and Fine Arts Society in Mornington. About 230 members and guests enjoyed a fascinating and well-illustrated presentation on The Canal Age, Mornington branch chairman Peter McGinley said. Mr Atterbury gave insights into the development of the network of canals in Britain, 1760s1840s, that he said was at the heart of the Industrial Revolution. Their

development was said to have had a major impact on artists such as John Constable and manufacturers such as Josiah Wedgwood. The talk looked at those who worked on the canal boats, especially working families who travelled the network in all conditions to earn an income. Mr McGinley said this year’s program included a wide range of topics: A New Black Identity: The Harlem Renaissance of the 1920s, The Mistress of Romance meets the Master of Suspense: Daphne du Maurier and

Alfred Hitchcock, and Rembrandt’s Vision: Dutch History Painting in the 17th Century. ADFAS members learn about the arts in a friendly environment. The next talk on Friday 4 May focuses on British artist William Hogarth. New members are welcome. The hour-long lectures are at 5.30pm at the Peninsula Community Theatre, Wilsons Road, Mornington. They are followed by light refreshments and an opportunity to meet the lecturer and fellow members. Details: Lorraine Borthwick 0419 789 280.

You’ll love what we do Create Beautiful Meals