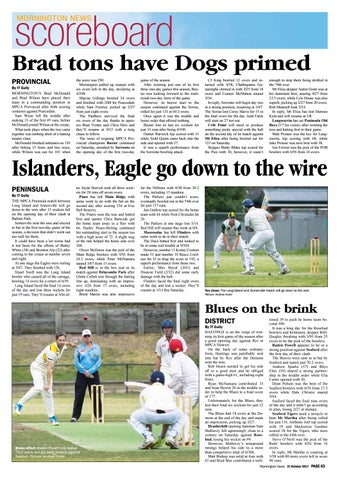 By IT Gully MORNINGTON’S Brad McDonald and Brad Wilson have placed their team in a commanding position in MPCA Provincial after both scoring centuries against Pearcedale. Sam Wiese left the middle after making 33 of the first 49 runs, before McDonald joined Wilson at the crease. What took place when the two came together was nothing short of a batting master class. McDonald finished unbeaten on 150 after hitting 15 fours and two sixes, while Wilson was out for 101 when

enough to stop them being skittled in the 74th over. Mt Eliza skipper Justin Grant was at his dominant best, snaring 4/27 from 23.5 overs, while Lyle House was also superb, picking up 2/27 from 20 overs. Rob Maskiell took 2/14. In reply, Mt Eliza has lost Damien Kent and will resume at 1/8. Langwarrin has set Peninsula Old Boys 217 for victory after winning the toss and batting first in their game. Matt Prosser was the key for Langwarrin, top scoring with 68, while Jake Prosser was next best with 38. Jon Forrest was the pick of the POB bowlers with 4/56 from 24 overs.

the score was 290. Mornington pulled up stumps with six overs left in the day, declaring at 4/298. Shayne Gillings bowled 24 overs and finished with 2/88 for Pearcedale while Sam Frawley picked up 2/37 from just eight overs. The Panthers survived the final six overs of the day thanks to openers Brad Trotter and Chris Dew and they’ll resume at 0/12 with a long chase to follow. The woes of reigning MPCA Provincial champions Baxter continued on Saturday, smashed by Sorrento on the opening day of the first two-day

game of the season. After winning just one of its first three one-day games this season, Baxter was looking forward to the traditional two-day form of the game. However, its horror start to the season continued against the Sorras, rolled for just 133 in 60.3 overs. Once again it was the middle and lower order that offered nothing. Baxter lost its last six wickets for just 33 runs after being 4/100. Daniel Warwick top scored with 33 while Todd Quinn came back into the side and opened with 27. It was a superb performance from the Sorrento bowling attack.

CJ King bowled 12 overs and returned with 4/38, Chathupama Gunasinghe chimed in with 3/25 from 18 overs and Connor McMahon snared 3/34. In reply, Sorrento will begin day two in a strong position, resuming at 1/47. The Sorras lost Corey Harris for 15 in the final overs for the day. Jedd Falck will start on 27 not out. Crib Point will need to produce something pretty special with the ball on the second day of its match against Mt Eliza after being bowled out for 123 on Saturday. Skipper Matty Blake top scored for the Pies with 30, however, it wasn’t

ter Jayde Herrick took all three wickets for 28 runs off seven overs. Pines has left Main Ridge with some work to do with the bat on the second day after scoring 234 at Eric Bell Reserve. The Piners won the toss and batted first and opener Chris Bartczak got the home team away to a flier with 66. Harley Peace-Stirling continued his outstanding start to the season too with a high score of 72. A slight wag of the tale helped the home side over 200. Oliver McEnroe was the pick of the Main Ridge bowlers with 5/56 from 24.1 overs, while Peter McNamara snared 3/67 from 15 overs. Red Hill is in the box seat in its match against Delacombe Park after Glenn Collett tore through the batting line up, dominating with an impressive 5/26 from 17 overs, including eight maidens. Brent Martin was also impressive

for the Hillmen with 4/38 from 30.2 overs, including 15 maidens. The Parkers just couldn’t score, eventually bowled out in the 74th over for just 137 runs. Jon Guthrie top scored for the home team with 44 while Nick Christides hit 26. The Parkers at one stage lost 5/14. Red Hill will resume this week at 0/4. Moorooduc has left Flinders with some work to do in their match. The Ducs batted first and looked to be in some real trouble at 9/104. However, number 11 Kenny Cremen made 51 and number 10 Reece Cordeux hit 32 to drag the score to 192, a superb performance from those two. Earlier, Max Royal (3/41) and Dwayne Field (2/32) did some early damage with the ball. Flinders faced the final eight overs of the day and lost a wicket. They’ll resume at 1/14 this Saturday.

Too close: The Long Island and Somerville match will go down to the wire.

Islanders, Eagle go down to the wire PENINSULA

By IT Gully THE MPCA Peninsula match between Long Island and Somerville will go down to the wire after 13 wickets fell on the opening day of their clash at Ballam Park. Somerville won the toss and elected to bat in the first two-day game of the season, a decision that didn’t work out too well for them. It could have been a lot worse had it not been for the efforts of Bailey White (38) and Brenton Alp (22) after coming to the crease at number seven and eight. At one stage the Eagles were reeling at 5/47. They finished with 136. Stuart Swift was the Long Island bowler who caused all of the carnage, bowling 14 overs for a return of 6/39. Long Island faced the final 14 overs of the day and lost three wickets for just 19 runs. They’ll resume at 3/46 af-

Blues on the brink DISTRICT

By IT Gully HASTINGS is on the verge of winning its first game of the season after a good opening day against Rye in MPCA District. On the back of some ordinary form, Hastings was justifiably sent into bat by Rye after the Demons won the toss. Rob Hearn needed to get his side off to a good start and he obliged with a game-high 61, including eight fours. Ryan McNamara contributed 33 and Sean Hewitt 20 in the middle order to help the Blues to a final score of 177. Unfortunately for the Blues, they lost their final six wickets for just 12 runs. The Blues had 18 overs at the Demons at the end of the day and made an impression, picking up 3/27. Heatherhill opening batsman Sam Mullavey fell agonisingly close to a century on Saturday against Rosebud, losing his wicket on 99. However, Mullavey’s sensational innings helped his side to a more than competitive total of 6/306. Matt Bishop was solid at four with 65 and Brad Mur contributed a well-

timed 39 to push he home team beyond 300. It was a long day for the Rosebud bowlers and fieldsmen, skipper Billy Quigley finishing with 3/95 from 25 overs to be the pick of the bowlers. Baden Powell appears to be in a strong position against Seaford after the first day of their clash. The Braves were sent in to bat by Seaford and lasted just 70.2 overs. Andrew Sparks (57) and Rhys Elmi (50) shared a strong partnership in the middle order while Elia Carter opened with 30. Dean Polson was the best of the Seaford bowlers with 4/34 from 17.3 overs while Dale Christie snared 3/44. Seaford faced the final nine overs of the day and it didn’t go according to plan, losing 2/27 at stumps. Seaford Tigers need a miracle to beat Mt Martha after being rolled for just 116. Anthony Joel top scored with 19 and Mackenzie Gardner scored 18 for the Tigers, who were rolled in the 64th over. Steve O’Neill was the pick of the Reds’ bowlers with 4/26 from 16 overs. In reply, Mt Martha is coasting at 1/38 with 80 more overs left to score 90 runs.