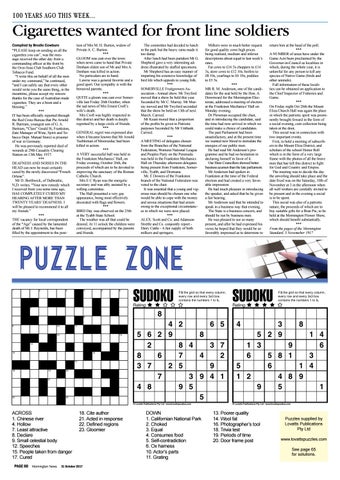 Cigarettes wanted for front line soldiers Compiled by Brodie Cowburn “PLEASE keep on sending us all the cigarettes you can”, was the message received the other day from a commanding officer at the front by the Over-Seas Club Southern Club Tobacco Fund. “I write this on behalf of all the men under my command,” he continued, “and I can safely say that every other would write you the same thing, in the meantime, please accept my sincere thanks for the case of Australian made cigarettes. They are a boon and a blessing.” *** IT has been officially reported through the Red Cross Bureau that Pte Arnold R. Bartram, youngest son of G. A. Bartram, “Clare” Gould St, Frankston, (late Manager of Wine, Spirit and Tobacco Dept. Mutual Store) is prisoner of war in Germany. He was previously reported died of wounds at 29th Casuality Clearing Station on 13th May 1917. *** DEAFNESS AND NOISES IN THE HEAD can now be must certainly cured by the newly discovered “French Orlene”. Mr D. Borthwick, of Dalbeattie, N,D. writes. “Your new remedy which I received from you some time ago, HAS COMPLETELY CURED MY HEARING AFTER MORE THAN TWENTY YEARS’ DEAFNESS. I will be pleased to recommend it to all my friends.” *** THE vacancy for local correspondent of the “Age” caused by the lamented death of Mr J. Reynolds, has been filled by the appointment to the posi-

tion of Mrs M. H. Burton, widow of Private A. C. Burton. *** GLOOM was cast over the town when news came to hand that Private Denham eldest son of Mr and Mrs A. Denham was killed in action. No particulars are to hand. Lawrie was a general favorite and a good sport. Our sympathy is with the bereaved parents. *** QUITE a gloom was cast over Somerville last Friday 26th October, when the sad news of Mrs Ernest Croft’s wife’s death. Mrs Croft was highly respected in this district and her death is deeply regretted by a large circle of friends. *** GENERAL regret was expressed also when it became known that Mr Arnold Toebleman of Moorooduc had been killed in action. *** A VERY successful ball was held in the Frankston Mechanics’ Hall, on Friday evening, October 26th, the proceeds of which are to be devoted to improving the sanctuary of the Roman Catholic Church. Mrs E C Ryan was the energetic secretary and was ably assisted by a willing committee. The Hall presented a very gay appearance, being most effectively decorated with flags and flowers. *** BIRD Day was observed on the 25th at the Tyabb State School. The weather was all that could be desired. At 11 oclock the children were conveyed, accompanied by the parents and friends.

The committee had decided to lunch in the park but the heavy rains made it too damp. After lunch had been partaken Mr G. Shepherd gave a very interesting address illustrated by stuffed specimens. Mr Shepherd has an easy manner of imparting his extensive knowledge of bird life which appeals to young folk. *** SOMERVILLE Fruitgrowers Association - Annual show. Mr Twyford moved that a show be held this year. Seconded by Mr C. Murray. Mr Murray moved and Mr Twyford seconded that the show be held on 13th of next March. Carried. Mr Keast mored that a proportion of the profits be given to Patriotic purposes Seconded by Mr Unthank. Carried. *** A MEETING of delegates chosen from the Branches of the National Federation, Womens National League and Peoples Party on the Peninsula was held in the Frankston Mechanics Hall on Thursday afternoon delegates being present from Frankston, Somerville, Tyabb, and Dromana. Mr. E Dowers of the Frankston branch of the National Federation was voted to the chair. It was essential that a young and vigorous man should be chosen one who would be able to cope with the money and serous situations that had arisen owing to the exceptional circumstances in which we were now placed. *** ALEX. Scott and Co. and Adamson Strettle and Co. conjointly report Dairy Cattle - A fair supply of both milkers and springers.

Milkers were in much better request for good quality cows high prices being realised, medium and inferior descriptions about equal to last week’s rates. Fat cows to £16 5s choppers to £14 5s, store cows to £12 10s. heifers to £8 10s, yearlings to £6 10s, poddies to £5 5s. *** MR R. M. Anderson, one of the candidates for the seat held by the Hon. A. Downward for the Mornington Electorate, addressed a meeting of electors at the Frankston Mechanics’ Hall on Monday evening. Dr Plowman occupied the chair, and in introducing the candidate, said the time had now arrived in which we could make a choice of candidates. The past Parliament had been unsatisfactory, and at the present time we wanted new blood to stimulate the energies of our public men. He had read Mr Anderson’s programme and he had no hesitation in declaring himself in favor of it. Our Shire Councillors showed better business acumen than the late parliament. Mr Anderson had spoken in Frankston at the time of the Federal election and had created a very favorable impression. He had much pleasure in introducing the speaker, and asked that he be given a fair hearing. Mr Anderson said that he intended to speak in a business way that evening. The State is a business concern, and should be run by business men. He was pleased to see so many present, and after he had expressed his views he hoped that they would be so favorably impressed as to determine to

return him at the head of the poll. *** A NUMBER of areas have under the Game Acts been proclaimed by the Governor-in-Council as localities in which, during the whole year, it is unlawful for any person to kill any species of Native Game (birds and other animals). Full information of these localities can be obtained on application to the Chief Inspector of Fisheries and Game. *** On Friday night Oct 26th the Mount Eliza Church Hall was again the place in which the patriotic spirit was prominently brought foward in the form of a social evening, coin collection being taken at the door, This social was in connection with two important events. First, to hold a meeting of subscribers to the Mount Eliza District, and scholars of the school Honor Roll which is in the form of a very large frame with the photos of all the brave men that hae left this district to fight for God and Country and Empire. The meeting was to decide the day the unveiling should take place and the date fixed was on the Saturday, 10th of November at 3 in the afternoon when all well wishers are cordially invited to be present and in the evening a social is to be spent. This social was also of a patriotic nature, the proceeds of which are to buy suitable gifts for a Bran Pie, to be held at the Mornington Flower Show, which should benefit substantially. *** From the pages of the Mornington Standard, 3 Novemeber 1917