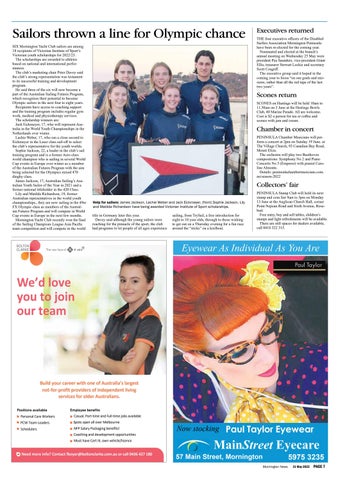 Sailors thrown a line for Olympic chance SIX Mornington Yacht Club sailors are among 18 recipients of Victorian Institute of Sport’s Victorian youth scholarships for 2022/23. The scholarships are awarded to athletes based on national and international performances. The club’s marketing chair Peter Davey said the club’s strong representation was testament to its successful training and development program. He said three of the six will now become a part of the Australian Sailing Futures Program, which recognises their potential to become Olympic sailors in the next four to eight years. Recipients have access to coaching support and the training program includes regular gym work, medical and physiotherapy services. The scholarship winners are: Jack Eickmeyer, 17, who will represent Australia in the World Youth Championships in the Netherlands over winter. Lachie Weber, 17, who ran a close second to Eickmeyer in the Laser class sail-off to select the club’s representative for the youth worlds. Sophie Jackson, 22, a leader in the club’s sail training program and is a former Aero class world champion who is sailing in several World Cup events in Europe over winter as a member of the Australian Futures Program with the aim being selected for the Olympics mixed 470 dinghy class. James Jackson, 17, Australian Sailing’s Australian Youth Sailor of the Year in 2021 and a former national titleholder in the 420 Class. Lily and Matilda Richardson, 19, former Australian representatives in the world youth championships., they are now sailing in the 49er FX Olympic class as members of the Australian Futures Program and will compete in World Cup events in Europe in the next few months. Mornington Yacht Club recently won the final of the Sailing Champions League Asia Pacific team competition and will compete in the world

Executives returned THE four executive officers of the Disabled Surfers Association Mornington Peninsula have been re-elected for the coming year. Nominated and elected at the branch’s annual meeting on Wednesday 25 May were president Pea Saunders, vice-president Grant Ellis, treasurer Stewart Lockie and secretary Scott Cosgriff. The executive group said it hoped in the coming year to focus “on our goals and missions, rather than all the red tape of the last two years”.

Scones return SCONES on Hastings will be held 10am to 11.30am on 3 June at the Hastings Bowls Club, 40 Marine Parade. All are welcome. Cost is $2 a person for tea or coffee and scones with jam and cream.

Collectors’ fair Help for sailors: James Jackson, Lachie Weber and Jack Eickmeyer, (front) Sophie Jackson, Lily and Matilda Richardson have being awarded Victorian Institute of Sport scholarships. title in Germany later this year. Davey said although the young sailors were reaching for the pinnacle of the sport, the club had programs to let people of all ages experience

sailing, from TrySail, a free introduction for eight to 10 year olds, through to those wishing to get out on a Thursday evening for a fun race around the “sticks” on a keelboat.

PENINSULA Stamp Club will hold its next stamp and coin fair 9am to 3pm on Monday 13 June at the Anglican Church Hall, corner Point Nepean Road and Sixth Avenue, Rosebud. Free entry, buy and sell tables, children’s stamps and light refreshments will be available. There are still spaces for dealers available, call 0418 322 315.

We’d love you to join our team

Build your career with one of Australia’s largest not-for-profit providers of independent living services for older Australians. Positions available

Spots open all over Melbourne