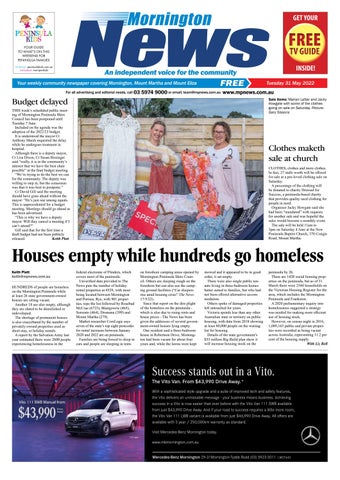 Sale items: Marian Latter and Jacky Howgate with some of the clothes going on sale on Saturday. Picture: Gary Sissons

THIS week’s scheduled public meeting of Mornington Peninsula Shire Council has been postponed until Tuesday 7 June. Included on the agenda was the adoption of the 2022/23 budget. It is understood the mayor Cr Anthony Marsh requested the delay while he undergoes treatment in hospital. Although there is a deputy mayor, Cr Lisa Dixon, Cr Susan Bissinger said “really, it is in the community’s interest that we have the best chair possible” at the final budget meeting. “We’re trying to do the best we can for the community. The deputy was willing to step in, but the consensus was that it was best to postpone.” Cr David Gill said the meeting should have gone ahead without the mayor: “He’s just one among equals. This is unprecedented for a budget meeting. Meetings should go ahead as has been advertised. “This is why we have a deputy mayor. Will they cancel a meeting if I can’t attend?” Gill said that for the first time a draft budget had not been publicly released. Keith Platt

Clothes maketh sale at church CLOTHES, clothes and more clothes. In fact, 27 stalls worth will be offered for sale at a pre-loved clothing sale on Saturday. A percentage of the clothing will be donated to charity Dressed for Success, a peninsula-based charity that provides quality used clothing for people in need. Organiser Jacky Howgate said she had been “inundated” with requests for another sale and was hopeful the sales would become a monthly event. The sale will be held 11am to 3pm on Saturday 4 June at the New Peninsula Baptist Church, 370 Craigie Road, Mount Martha.

Houses empty while hundreds go homeless Keith Platt keith@mpnews.com.au HUNDREDS of people are homeless on the Mornington Peninsula while at least 26 state government-owned houses are sitting vacant. Another 18 are also empty, although they are slated to be demolished or redeveloped. The shortage of permanent houses is also exacerbated by the number of privately-owned properties used as short-stay, or holiday rentals. A report by the Salvation Army last year estimated there were 2600 people experiencing homelessness in the

federal electorate of Flinders, which covers most of the peninsula. Unverified data provided to The News puts the number of holiday rental properties at 4529, with most being located between Mornington and Portsea. Rye, with 901 properties, tops the list followed by Rosebud McCrae (6723), Blairgowrie (465), Sorrento (464), Dromana (399) and Mount Martha (279). Market researcher CoreLogic says seven of the state’s top eight postcodes for rental increases between January 2020 and 2022 are on peninsula. Families are being forced to sleep in cars and people are sleeping in tents

on foreshore camping areas opened by Mornington Peninsula Shire Council. Others are sleeping rough on the foreshore but can also use the camping ground facilities (“Car sleepers rise amid housing crisis” The News 17/5/22). Since that report on the dire plight of the homeless on the peninsula which is also due to rising rents and house prices - The News has been given the addresses of several government-owned houses lying empty. One resident said a three-bedroom house in Robertson Drive, Mornington had been vacant for about four years and, while the lawns were kept

mowed and it appeared to be in good order, it sat empty. There were also single public tenants living in three-bedroom homes better suited to families, but who had not been offered alternative accommodation. Others spoke of damaged properties left untouched for years. Victoria spends less than any other Australian state or territory on public housing, with data from 2018 showing at least 80,000 people on the waiting list for housing. Details of the state government’s $53 million Big Build plan show it will increase housing stock on the

peninsula by 26. There are 1428 social housing properties on the peninsula, but as of 31 March there were 2544 households on the Victorian Housing Register for the area, which includes the Mornington Peninsula and Frankston. A 2020 parliamentary inquiry into homelessness suggested a strategy was needed for making more efficient use of housing stock. However, on census night in 2016, 1,089,165 public and private properties were recorded as being vacant across Australia, representing 11.2 per cent of the housing supply. With Liz Bell