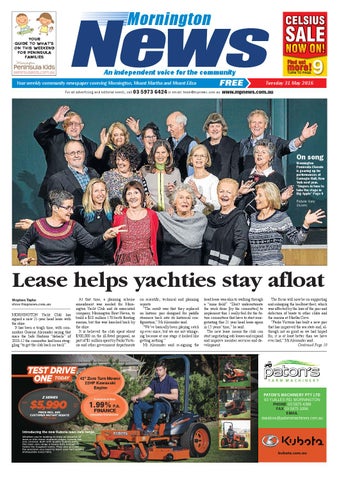 On song Mornington Peninsula Chorale is gearing up for performances at Carnegie Hall, New York next year. “Singers in tune to take the stage in Big Apple” Page 8 Picture: Gary Sissons

Lease helps yachties stay afloat At that time, a planning scheme amendment was needed for Mornington Yacht Club and its associated company, Mornington Boat Haven, to build a $18 million 170-berth floating marina, but this was knocked back by the shire. It is believed the club spent about $500,000 on the ill-fated proposal, as part of $1 million spent by Parks Victoria and other government departments

Stephen Taylor steve@mpnews.com.au MORNINGTON Yacht Club has signed a new 21-year head lease with the shire. It has been a tough time, with commodore Graeme Alexander saying that since the Safe Harbour “debacle” of 2010-12 the committee had been struggling “to get the club back on track”.

head lease was akin to walking through a “mine field”. “Don't underestimate the work done [by the committee] to implement this. I really feel for the future committees that have to start renegotiating this 21 year head lease again in 15 years’ time,” he said. The new lease means the club can start negotiating sub leases and expand and improve member services and development.

The focus will now be on supporting and enlarging the keelboat fleet, which was affected by the loss of the pier and defection of boats to other clubs and the marina at Martha Cove. “Parks Victoria has built a new pier that has improved the sea state and, although not as good as we had hoped for, it is at least better than we have ever had,” Mr Alexander said. Continued Page 10

on scientific, technical and planning reports. “The result was that they replaced an historic pier designed for paddle steamers back into its historical configuration,” Mr Alexander said. “We’ve basically been playing catch up ever since, but we are not whingeing because at one stage it looked like getting nothing.” Mr Alexander said re-signing the