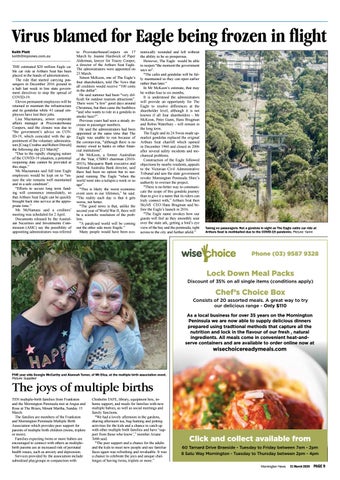 Virus blamed for Eagle being frozen in flight Keith Platt keith@mpnews.com.au THE estimated $20 million Eagle cable car ride at Arthurs Seat has been placed in the hands of administrators. The ride that started carrying passengers in December 2016 ground to a halt last week in line state government directives to stop the spread of COVID-19. Eleven permanent employees will be retained to maintain the infrastructure and its gondolas while 41 casual employees have lost their jobs. Lisa Macnamara, senior corporate affairs manager at Pricewaterhouse Coopers, said the closure was due to “the government’s advice on COVID-19, which coincided with the appointment of the voluntary administrators [Craig Crosbie and Robert Ditrich] the following day [23 March]”. “Due to the rapidly changing nature of the COVID-19 situation, a potential reopening date cannot be provided at this stage.” Ms Macnamara said full time Eagle employees would be kept on to “ensure the site remains well maintained and in a safe condition”. “Efforts to secure long term funding will commence immediately, so that Arthurs Seat Eagle can be quickly brought back into service at the appropriate time.” Ms McNamara said a creditors’ meeting was scheduled for 2 April. Documents released by the Australian Securities and Investments Commission (ASIC) say the possibility of appointing administrators was referred

to PrcewaterhouseCoopers on 17 March by Joanne Hardwick of Piper Alderman, lawyer for Tracey Cooper, a director of the Arthurs Seat Eagle. The administrators were appointed on 23 March. Simon McKeon, one of The Eagle’s four shareholders, told The News that all creditors would receive “100 cents in the dollar”. He said summer had been “very difficult for outdoor tourism attractions”. There were “a few” good days around Christmas, but then came the bushfires “and who wants to ride in a gondola in smoke haze?”. Previous years had seen a steady increase in passenger numbers. He said the administrators had been appointed at the same time that The Eagle was unable to run because of the coronavirus, “although there is no money owed to banks or other financial institutions”. Mr McKeon, a former Australian of the Year, CSIRO chairman (20102015), Macquarie Bank executive and National Australia Bank director, said there had been no option but to suspend running The Eagle “when the world went into a tailspin a week or so ago”. “This is likely the worst economic event seen in our lifetimes,” he said. “The reality each day is that it gets worse, not better. “The good news is that, unlike the second year of World War II, there will be a scientific resolution of the problem. “A paralysed world will be coming out the other side more fragile.” Many people would have been eco-

nomically wounded and left without the ability to be so prosperous. However, The Eagle would be able to reopen “the moment the government says so”. “The cafes and gondolas will be fully maintained so they can open earlier rather than later.” In Mr McKeon’s estimate, that may be within four to six months. It is understood the administrators will provide an opportunity for The Eagle to resolve differences at the shareholder level, although it is not known if all four shareholders - Mr McKeon, Peter Gunn, Hans Brugman and Robin Waterbury - will remain in the long term. The Eagle and its 24 Swiss made upmarket gondolas replaced the original Arthurs Seat chairlift which opened in December 1960 and closed in 2006 after several safety incidents and mechanical problems. Construction of the Eagle followed objections by nearby residents, appeals to the Victorian Civil Administrative Tribunal and saw the state government revoke Mornington Peninsula Shire’s authority to oversee the project. “There is no better way to communicate the scope of this gondola journey than to give it a name that its riders can truly connect with,” Arthurs Seat then Skylift CEO Hans Brugman said before the Eagle’s launch in 2016. “The Eagle name invokes how our guests will feel as they smoothly soar over the state ark, getting a bird’s eye view of the bay and the peninsula, right across to the city and further afield.”

Taking no passengers: Not a gondola in sight as The Eagle cable car ride at Arthurs Seat is mothballed due to the COVID-19 pandemic. Picture: Yanni

Discount of 35% on all single items (conditions apply)

Consists of 20 assorted meals. A great way to try our delicious range - Only $110 As a local business for over 35 years on the Mornington Peninsula we are now able to supply delicious dinners prepared using tradtional methods that capture all the nutrition and lock in the flavour of our fresh , natural ingredients. All meals come in convenient heat-andserve containers and are available to order online now at

The joys of multiple births TEN multiple-birth families from Frankston and the Mornington Peninsula met at Angus and Rose at The Briars, Mount Martha, Sunday 15 March. The families are members of the Frankston and Mornington Peninsula Multiple Birth Association which provides peer support for parents of multiple birth children (twins, triplets or more). Families expecting twins or more babies are encouraged to connect with others as multiplebirth parents are at increased risk of perinatal health issues, such as anxiety and depression. Services provided by the association include subsidised playgroups in conjunction with

Chisholm TAFE, library, equipment hire, inhome support, and meals for families with new multiple babies, as well as social meetings and family functions. “We had a lovely afternoon in the gardens, sharing afternoon tea, bug hunting and potting activities for the kids and a chance to catch up with other multiple birth families and have ‘support from those who know’,” member Ariane Tebb said. “The peer support and a chance for the adults and the kids to meet new people and see familiar faces again was refreshing and invaluable. It was a chance to celebrate the joys and unique challenges of having twins, triplets or more.”