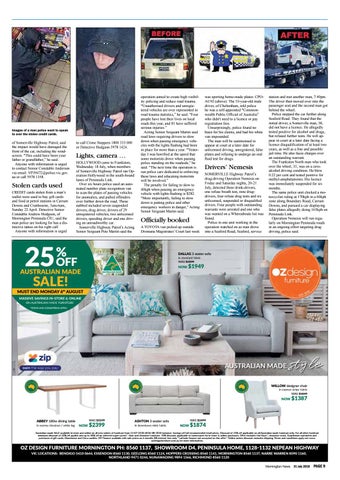 Images of a man police want to speak to over the stolen credit cards.

of Somerville Highway Patrol, said the impact would have damaged the front of the car, including the windscreen. “This could have been your father or grandfather,” he said. Anyone with information is urged to contact Senior Constable Anderson via email: VP39472@police.vic.gov. au or call 5978 1358.

Stolen cards used CREDIT cards stolen from a man’s wallet were used to buy gift cards and food at petrol stations in Carrum Downs and Cranbourne, 5am-6am, Sunday 22 April. Detective Senior Constable Andrew Hodgson, of Mornington Peninsula CIU, said the man police are looking for has a distinctive tattoo on his right calf. Anyone with information is urged

operation aimed to create high visibility policing and reduce road trauma. “Unauthorised drivers and unregistered vehicles are over represented in road trauma statistics,” he said. “Four people have lost their lives on local roads this year, and 81 have suffered serious injuries.” Acting Senior Sergeant Martin said road laws requiring drivers to slow down when passing emergency vehicles with the lights flashing had been in place for more than a year. “Yesterday I was horrified at the speed that some motorists drove when passing police standing on the roadside,” he said. “The next time the operation is run police cars dedicated to enforcing these laws and educating motorists will be involved.” The penalty for failing to slow to 40kph when passing an emergency vehicle with lights flashing is $282. “More importantly, failing to slow down is putting police and other emergency workers in danger,” Acting Senior Sergeant Martin said.

was sporting home-made plates: CPOAU92 (above). The 53-year-old male driver, of Cheltenham, told police he was a self-appointed “Commonwealth Public Official of Australia” who didn&#39;t need to a licence or pay registration fees. Unsurprisingly, police found no basis for his claims, and had his white van impounded. The man will be summonsed to appear at court at a later date for unlicensed driving, unregistered, false plates and refusing to undergo an oral fluid test for drugs.

Drivers’ Nemesis SOMERVILLE Highway Patrol’s drug-driving Operation Nemesis on Friday and Saturday nights, 20-21 July, detected three drink-drivers, one refuse breath test, nine drugdrivers, four refuse drug tests and six unlicensed, suspended or disqualified drivers. Four people with outstanding warrants were arrested and one who was wanted on a Whereabouts list was found. Police in one unit working in the operation watched on as man drove into a Seaford Road, Seaford, service

station and met another man, 7.40pm. The driver then moved over into the passenger seat and the second man got behind the wheel. Police stopped the car further along Seaford Road. They found that the initial driver, a Somerville man, 38, did not have a licence. He allegedly tested positive for alcohol and drugs, but refused further tests. He will appear in court at a later date facing a licence disqualification of at least two years, as well as a fine and possible jail time. He also faces charges over an outstanding warrant. The Frankston North man who took over the wheel, 35, was on a zeroalcohol driving condition. He blew 0.22 per cent and tested positive for methyl-amphetamines. His licence was immediately suspended for six months. The same police unit clocked a motorcyclist riding at 170kph in a 60kph zone along Boundary Road, Carrum Downs, and pursued a car displaying false plates allegedly doing 165kph on Peninsula Link. Operation Nemesis will run regularly on Mornington Peninsula roads in an ongoing effort targeting drug driving, police said.

Australian made SALE available in-store and online on all new orders of furniture from 24-07-2018 till 06-08-2018 inclusive. Savings off full recommended retail prices. Discount of 25% off applicable on all Australian made furniture only. For all other furniture minimum discount of 20% off applies and up to 50% off on selected super savers*, floor and clearance furniture. 10% discount applicable to homewares for in-store &amp; online purchases. Offer excludes Hot Buys*, clearance stock, Guardsman warranties and purchases of gift cards, Glasshouse and Circa candles. ZIP Finance available with sale prices on 6 months 0% interest free only.* Latitude finance not accepted on this offer.* Online orders discount excludes shipping. Terms and conditions apply see www. ozdesignfurniture.com.au for more information.