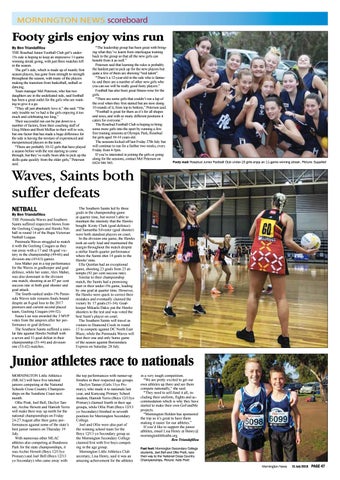 Footy girls enjoy wins run By Ben Triandafillou THE Rosebud Junior Football Club girl’s under15s side is hoping to keep an impressive 11-game winning streak going, with just three matches left in the season. The girl’s side, which is made up of mainly first season players, has gone from strength to strength throughout the season, with many of the players making the transition from basketball, netball or dancing. Team manager Mel Peterson, who has two daughters are in the undefeated side, said football has been a great outlet for the girls who are wanting to give it a go. “They all just absolutely love it,” she said. “The only trouble we’ve had is the girls enjoying it too much and celebrating too long.” Their successful run can be put down to a number of factors, from their coaching staff of Greg Hilton and Brett McRae to their will to win, but one factor that has made a huge difference for the side is having the mixture of experienced and inexperienced players in the team. “There are probably 10-12 girls that have played a season before with the rest starting to come through, but they’ve really been able to pick up the skills quite quickly from the older girls,” Peterson said.

“The leadership group has been great with bringing what they’ve learnt from interleague training back to the group so that all the new girls can benefit from it as well.” Peterson said that learning the rules is probably the hardest part to pick up for the new players but quite a few of them are showing “real talent”. “There’s a 12-year-old in the side who is fantastic and there are a number of other new girls who you can see will be really good footy players.” Football has also been great fitness-wise for the girls. “There are some girls that couldn’t run a lap of the oval when they first started but are now doing 10 rounds of it, from top to bottom,” Peterson said. “Football is great for them as it’s for all shapes and sizes, and with so many different positions it caters for everyone.” The Rosebud Football Club is hoping to bring some more girls into the sport by running a few free training sessions at Olympic Park, Rosebud for girls aged 10-14 years old. The sessions kicked off last Friday 27th July but will continue to run for a further two weeks, every Friday from 4-5pm. If you’re interested in joining the girls or going along for the sessions, contact Mel Peterson on 0424 946 945.

By Ben Triandafillou THE Peninsula Waves and Southern Saints suffered respective blows from the Geelong Cougars and Hawks Netball in round 14 of the Bupa Victorian Netball League. Peninsula Waves struggled to match it with the Geelong Cougars as they run away with a 17 and 18-goal victory in the championship (49-66) and division one (45-63) games. Jess Maher put in a top performance for the Waves in goalkeeper and goal defence, while her sister, Alex Maher, was also dominant in the division one match, shooting at an 87 per cent success rate in both goal shooter and goal attack. The fourth-ranked under-19s Peninsula Waves side remains finals bound despite an 8-goal loss to the 2017 premiers and current second placed team, Geelong Cougars (44-52). Sussu Liai was awarded the 3 MVP votes from the umpires after her performance in goal defence. The Southern Saints suffered a similar fate against Hawks Netball with a seven and 11-goal defeat in their championship (51-44) and division one (53-42) matches.

The Southern Saints led by three goals in the championship game at quarter time, but weren’t able to maintain the intensity that the Hawks bought. Kirsty Clark (goal defence) and Samantha Silvester (goal shooter) were both standout players on court. In the division one game, the Hawks took an early lead and maintained the margin throughout the match despite a stellar fourth quarter performance where the Saints shot 14 goals to the Hawks’ nine. Ella Quinlan had an exceptional game, shooting 23 goals from 25 attempts (92 per cent success rate). Similar to their championship match, the Saints had a promising start in their under-19s game, leading by one goal at quarter time. However, the Hawks were quick to correct their mistakes and eventually claimed the victory by 17 goals (51-34). Goalkeeper Mikaela Dakic put the Hawks shooters to the test and was voted the best Saint’s player on court. The Southern Saints will travel as visitors to Diamond Creek in round 15 to compete against DC North East Blaze, while the Peninsula Waves will host their one and only home game of the season against Boroondara Express on Saturday 28 July.

Junior athletes race to nationals MORNINGTON Little Athletics (MLAC) will have five talented juniors competing at the National Schools Cross Country Championships on the Sunshine Coast next month. Ollie Pratt, Joel Bell, Declyn Tanner, Archie Hewett and Hamish Terris will make their way up north for the national championships on Friday 24-27 August after their gutsy performances against some of the state’s best junior runners on Thursday 19 July. With numerous other MLAC athletes also competing at Bundoora Park for the state championships, it was Archie Hewett (Boys 12/13yo Primary) and Joel Bell (Boys 12/13 yo Secondary) who came away with

the top performances with runner-up finishes in their respected age groups. Declyn Tanner (Girls 11yo Primary), who made it to nationals last year, and Kunyung Primary School student, Hamish Terris (Boys 12/13yo Primary) claimed fourth in their age groups, while Ollie Pratt (Boys 12/13 yo Secondary) finished in seventh position for Mornington Secondary College. Joel and Ollie were also part of the winning school team for the Boys 12/13 yo Secondary group as the Mornington Secondary College claimed first with five boys competing in the age group. Mornington Little Athletics Club secretary, Lisa Henry, said it was an amazing achievement for the athletes

in a very tough competition. “We are pretty excited to get our own athletes up there and see them compete nationally,” she said. “They need to self-fund it all, including their uniform, flights and accommodation which is why they have started to make their own GoFundMe projects. “Mornington Holden has sponsored the trip so it’s great to have them making it easier for our athletes.” If you’d like to support the junior athletes, email Lisa Henry at lhenry@ morningtonlittleaths.org Ben Triandafillou Fast feet: Mornington Secondary College students, Joel Bell and Ollie Pratt, race their way to the National Cross Country Championships. Picture: Kate Pratt Mornington News