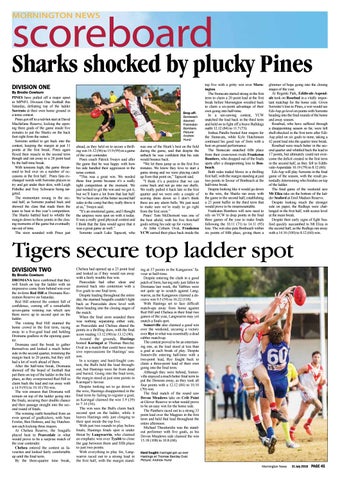 By Brodie Cowburn PINES have pulled off a major upset in MPNFL Division One football this Saturday, defeating top of the ladder Sorrento at their own home ground in a tense contest. Pines got off to a red-hot start at David Macfarlane Reserve, kicking the opening three goals of the game inside five minutes to put the Sharks on the back foot right from the outset. Sorrento settled to get back into the contest, keeping the margin at just 11 points at the first break. Pines again flexed their muscle in the second term though and ran away to a 28 point lead by the half-time break. With tensions high, the game threatened to boil over on a number of occasions in the first half. Pines fans exchanged words with Sorrento players to try and get under their skin, with Leigh Poholke and Troy Schwarze being targeted. The momentum swung in the second half, as Sorrento pushed back and showed the class that made them the team to beat in this year’s competition. The Sharks battled hard to whittle the margin down to three points in the closing moments of the game but eventually ran out of time. The siren sounded with Pines just

ahead, as they held on to secure a thrilling win 14.12 (96) to 15.9 (99) in a game of the year contender. Pines coach Patrick Swayn said after the game that he was happy with how his side handled their aggression in the tense contest. “This was a great win. We needed these four points because it’s a really tight competition at the moment. We just needed to get the win and we got it, but we’ll learn a lot from that last half. We’ve been one of the better second half sides in the comp but they really threw it at us,” Swayn said. “It’s an emotional game, and I thought the umpires were spot on with it today. It was a really good physical contest and I think that the fans would agree that it was a great game as well.” Sorrento coach Luke Tapscott, who

was one of the Shark’s best on the field during the game, said that despite the setback he was confident that his side would bounce back. “We let them jump us in the first five minutes. We know they love to start a game strong and we were playing catch up from that point on,” Tapscott said. “I think it’s a positive that we can come back and not go into our shells. We really pulled it back late in the first quarter and we were only a couple of scoring shots down so I don’t think there are any alarm bells. We just need to make sure we’re ready to go right from the first siren.” Pines’ Tom McDermott was one of the best afield, with his five first-half goals setting his side up for victory. At John Coburn Oval, Frankston YCW earned their place back inside the

top five with a gritty win over Mornington. The Stonecats started strong in the first term to claim a 20 point lead at the first break before Mornington wrestled back to claim a six-point advantage of their own going into half-time. In a see-sawing contest, YCW snatched the lead back in the third term and held on to fight off a brave Bulldogs outfit 12.12 (84) to 11.7 (73). Joshua Patullo booted four majors for the Stonecats, while Kyle Hutchinson continued his good run of form with a best on ground performance. The Stonecats snatched fifth place from their cross-town rivals Frankston Bombers, who dropped out of the finals spots after a disappointing loss to Bonbeach. Both sides traded blows in a thrilling first half, with the margin standing at just two points in favour of Bonbeach at the half-time break. Despite looking like it would go down to the wire, the Sharks ran away with the game in the second half, establishing a 25 point buffer in the third term that would prove to be insurmountable. Frankston Bombers will now need to rely on YCW to drop points in the final three games of the year to make finals following the 10.11 (71) to 14.11 (95) loss. The win also puts Bonbeach within six points of fifth place, giving them a

glimmer of hope going into the closing stages of the year. At Regents Park, Edithvale-Aspendale took on Rosebud in a vitally important matchup for the home side. Given Sorrento’s loss to Pines, a win would see Edi-Asp go level on points with Sorrento heading into the final rounds of the home and away season. Rosebud, who have suffered through a disappointing season so far, were left shell-shocked in the first term after EdiAsp piled on six goals to none, taking a 42 point lead into the quarter time break. Rosebud were much better in the second quarter and whittled back the lead to 17 points, but ultimately could not overcome the deficit created in the first term in the second half, as they fell to Edithvale-Aspendale 10.19 (79) to 8.12 (60). Edi-Asp will play Sorrento in the final game of the season, with the result potentially determining who finishes on top of the ladder. The final game of the weekend saw Mt Eliza take on the bottom of the ladder Seaford at Emil Madsen Reserve. Despite looking much the stronger side on paper, the Redlegs were challenged in the first half, with scores level at the main break. Despite their early signs of fight Seaford quickly succumbed to Mt Eliza in the second half, as the Redlegs ran away with a 14.16 (100) to 8.12 (60) win.

By Brodie Cowburn DROMANA have confirmed that they will finish on top the ladder with an impressive come from behind win over the in-form Red Hill at Dromana Recreation Reserve on Saturday. Red Hill entered the contest full of confidence, coming off a remarkable seven-game winning run which saw them move up to second spot on the ladder. The visiting Red Hill stunned the home crowd in the first term, racing away to a five-goal lead and holding Dromana goalless in the opening quarter. Dromana used the break to gather themselves and looked a much better side in the second quarter, trimming the margin back to 20 points, but they still had a lot of work ahead of them. After the half-time break, Dromana showed off the brand of football that put them on top of the ladder in the first place, as they overpowered Red Hill to claim back the lead and run away with a 14.9 (93) to 10.10 (70) win. The win ensures that Dromana will remain on top of the ladder going into the finals, securing their double chance and their passage straight into the second round of finals. The winning outfit benefited from an even spread of goalkickers, with Sam Fowler, Ben Holmes, and Jay Hutchinson each kicking three majors. At Chelsea Reserve, the Seagulls played host to Pearcedale in what would prove to be a surprise match of the year contender. Chelsea entered the contest as favourites and looked fairly comfortable up until the final term. By the three-quarter time break,

Chelsea had opened up a 25 point lead and looked as if they would run away with a fairly trouble free win. Pearcedale had other ideas and stormed back into contention with a five goals to one final term. Despite leading throughout the entire day, the stunned Seagulls couldn’t fight back as Pearcedale drew level with them heading into the closing stages of the match. When the final siren sounded there was nothing separating either side, as Pearcedale and Chelsea shared the points in a thrilling draw, with the final score reading 13.12 (90) to 13.12 (90). Around the grounds, Hastings hosted Karingal at Thomas Barclay Oval in a match that could have massive repercussions for Hastings’ season. In a scrappy and hard-fought contest, the Bulls held the lead throughout, but Hastings were far from dead and buried. Going into the final term, the margin stood at just nine points in Karingal’s favour. Despite looking set to go down to the wire, Hastings disappointed in the final term by failing to register a goal, as Karingal claimed the win 5.9 (39) to 7.14 (56). The win sees the Bulls claim back second spot on the ladder, while it leaves Hastings only just clinging to their spot inside the top five. With just two rounds to play before finals, Hastings finals spot is under threat by Langwarrin, who claimed an emphatic win over Tyabb to close the gap between them and fifth place to just two points. With everything to play for, Langwarrin raced out to a strong lead in the first half, with the margin stand-

ing at 37 points in the Kangaroos’ favour at half-time. Despite entering the clash in a good patch of form, having only just fallen to Dromana last week, the Yabbies were not quite up to scratch against Langwarrin, as the Kangaroos claimed a decisive win 9.5 (59) to 16.22 (118). With Hastings set to face difficult match-ups away from home against Red Hill and Chelsea in their final two games of the year, Langwarrin may yet snatch a finals spot. Somerville also claimed a good win over the weekend, securing a victory over Rye in what was essentially a dead rubber match-up. The contest proved to be an entertaining one, as the lead stood at less than a goal at each break of play. Despite Somerville entering half-time with a two-point lead, Rye fought back to claim a three-point lead of their own going into the final term. Although they were behind, Somerville enjoyed a much better final term to put the Demons away, as they took all four points with a 12.12 (84) to 10.10 (70) win. The final match of the round saw Devon Meadows take on Crib Point at Glover Reserve in what would prove to be an easy win for the home side. The Panthers raced out to a strong 33 point lead over the Magpies in the first term and held that lead throughout the entire afternoon. Michael Theodoridis was the standout performer with five goals, as his Devon Meadows side claimed the win 15.18 (108) to 10.8 (68). Hard fought: Karingal got up over Hastings at Thomas Barclay Oval. Picture: Andrew Hurst Mornington News