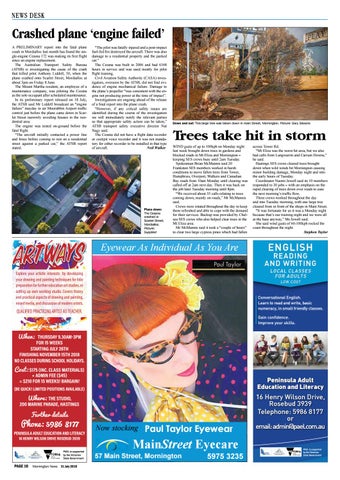 Crashed plane ‘engine failed’ A PRELIMINARY report into the fatal plane crash in Mordialloc last month has found the single-engine Cessna 172 was making its first flight since an engine replacement. The Australian Transport Safety Bureau (ATSB) is investigating the cause of the crash that killed pilot Anthony Liddell, 50, when the plane crashed onto Scarlet Street, Mordialloc at about 5pm on Friday 8 June. The Mount Martha resident, an employee of a maintenance company, was piloting the Cessna as the sole occupant after scheduled maintenance. In its preliminary report released on 18 July, the ATSB said Mr Liddell broadcast an “engine failure” mayday to air Moorabbin Airport traffic control just before the plane came down in Scarlet Street narrowly avoiding houses in the residential area. The engine was tested on-ground before the fatal flight. “The aircraft initially contacted a power line and fence before coming to rest on a residential street against a parked car,” the ATSB report stated.

“The pilot was fatally injured and a post-impact fuel-fed fire destroyed the aircraft. There was also damage to a residential property and the parked car.” The Cessna was built in 2006 and had 6348 hours in service and was used mostly for pilot flight training. Civil Aviation Safety Authority (CASA) investigators, overseen by the ATSB, did not find evidence of engine mechanical failure. Damage to the plane’s propeller “was consistent with the engine not producing power at the time of impact”. Investigations are ongoing ahead of the release of a final report into the plane crash. “However, if any critical safety issues are identified during the course of the investigation we will immediately notify the relevant parties so that appropriate safety action can be taken,” ATSB transport safety executive director Nat Nagy said. The Cessna did not have a flight data recorder or cockpit voice recorder and it was not mandatory for either recorder to be installed in that type of aircraft. Neil Walker

Down and out: This large tree was blown down in main Street, Mornington. Picture: Gary Sissons

Trees take hit in storm WIND gusts of up to 100kph on Monday night last week brought down trees in gardens and blocked roads in Mt Eliza and Mornington – keeping SES crews busy until 2am Tuesday. Spokesman Brian McMannis said 20 Frankston SES members worked in harsh conditions to move fallen trees from Tower, Humphries, Overport, Walkers and Canadian Bay roads from 10am Monday until clearing was called off at 2am next day. Then it was back on the job later Tuesday morning until 8pm. “We received about 35 calls relating to trees coming down, mainly on roads,” Mr McMannis said. Crews were rotated throughout the day to keep them refreshed and able to cope with the demand for their services. Backup was provided by Chelsea SES crews who also helped clear trees in the Mt Eliza area. Mr McMannis said it took a “couple of hours” to clear two large cypress pines which had fallen

across Tower Rd. “Mt Eliza was the worst hit area, but we also had calls from Langwarrin and Carrum Downs,” he said. Hastings SES crews cleared trees brought down when wild winds hit Mornington causing minor building damage, Monday night and into the early hours of Tuesday. Coordinator Naomi Jewell said its 10 members responded to 30 jobs – with an emphasis on the rapid clearing of trees down over roads to ease the next morning’s traffic flow. Three crews worked throughout the day and into Tuesday morning, with one large tree cleared from in front of the shops in Main Street. “It was fortunate for us it was a Monday night because that’s our training night and we were all at the base anyway,” Ms Jewell said. She said wind gusts of 60-100kph rocked the coast throughout the night. Stephen Taylor

Eyewear As Individual As You Are Explore your artistic interests by developing your drawing and painting techniques for folio preparation for further education art studies, or setting up own working studio. Covers theory and practical aspects of drawing and painting, mixed media, and discussion of modern artists.

PAEL is supported by the Victorian State Government

PAEL is supported by the Victorian State Government