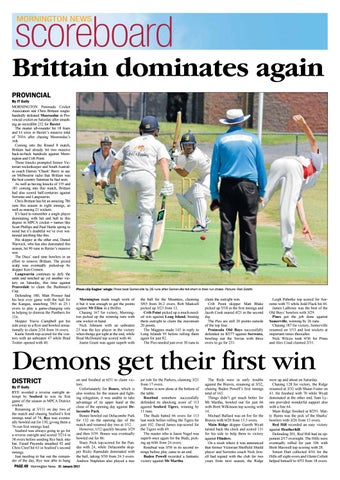 By IT Gully MORNINGTON Peninsula Cricket Association star Chris Brittain singlehandedly defeated Moorooduc in Provincial cricket on Saturday after smashing an incredible 232 for Baxter. The master all-rounder hit 18 fours and 14 sixes in Baxter’s massive total of 7/416 after chasing Moorooduc’s 168. Coming into the Round 8 match, Brittain had already hit two massive back-to-back hundreds against Mornington and Crib Point. Those knocks prompted former Victorian wicketkeeper and South Australia coach Darren ‘Chuck’ Berry to say on Melbourne radio that Brittain was the best country batsman he had seen. As well as having knocks of 155 and 181 coming into this match, Brittain had also scored half-centuries against Sorrento and Langwarrin. Chris Brittain has hit an amazing 786 runs this season in eight innings, as well as snaring 21 wickets. It’s hard to remember a single player dominating with bat and ball to this degree in MPCA cricket – names like Scott Phillips and Paul Hartle spring to mind but it’s doubtful we’ve ever witnessed anything like this. His skipper at the other end, Daniel Warwick, who has also dominated this season, hit 90 runs in Baxter’s massive win. The Ducs’ used nine bowlers in an effort to remove Brittain. The prized scalp was eventually picked-up by skipper Ken Cremen. Langwarrin continues to defy the odds and notched up yet another victory on Saturday, this time against Pearcedale to claim the Bushman’s Cup. Defending 180, Matt Prosser had his best ever game with the ball for the Kangas, snatching 7/65 in 25.1 overs to play a game-changing role in helping to dismiss the Panthers for 154. Skipper Travis Campbell got his side away to a flyer and bowled sensationally to claim 2/34 from 16 overs. Kaine Smith top-scored for the visitors with an unbeaten 47 while Brad Trotter opened with 40.

Mornington made tough work of it but it was enough to get the points against Mt Eliza in a thriller. Chasing 167 for victory, Mornington picked up the winning runs with one wicket in hand. Nick Johnson with an unbeaten 25 was the key player in the victory when things got tight at the end, while Brad McDonald top scored with 46. Justin Grant was again superb with

the ball for the Mounties, claiming 5/65 from 36.2 overs. Rob Maskiell picked up 3/23 from 13. Crib Point picked up a much-needed win against Long Island, beating them outright to claim the maximum 20 points. The Magpies made 145 in reply to Long Islands 95 before rolling them again for just 82. The Pies needed just over 30 runs to

claim the outright win. Crib Point skipper Matt Blake picked up 5/18 in the first innings and Jacob Cook snared 4/21 in the second dig. The Pies are still 20 points outside of the top four. Peninsula Old Boys successfully defended its 8/277 against Sorrento, bowling out the Sorras with three overs to go for 251.

Leigh Poholke top scored for Sorrento with 71 while Jedd Flack hit 44. James LaBrooy was the best of the Old Boys’ bowlers with 3/29. Pines got the job done against Somerville, winning by 26 runs. Chasing 187 for victory, Somerville resumed on 1/15 and lost wickets at important times thereafter. Nick Wilcox took 4/36 for Pines and Alex Coad claimed 2/31.

on and finished at 6/51 to claim victory. Unfortunately for Boneo, which is also winless for the season and fighting relegation, it was unable to take advantage of its upper hand at the close of the opening day against Delacombe Park. Boneo bowled out Delacombe Park for 132 on the opening day of the match and resumed day two at 1/12. However, 1/12 quickly became 3/29 and then 5/39. Boneo was eventually bowled out for 86. Stuey Peck top-scored for the Pandas with 24, while Delacombe skipper Ricky Ramsdale dominated with the ball, taking 5/30 from 24.3 overs. Andrew Stapleton also played a ma-

jor role for the Parkers, claiming 3/21 from 17 overs. Boneo is now alone at the bottom of the table. Rosebud somehow successfully defended its shocking score of 113 against Seaford Tigers, winning by 11 runs. The Buds batted 66 overs for 113 last week before rolling the Tigers for just 102. David James top-scored for the Tigers with 49. The master who is Jason Nagel was superb once again for the Buds, picking up 6/46 from 24 overs. Rosebud was 5/56 in its second innings before play came to an end. Baden Powell recorded a fantastic victory against Mt Martha.

The Reds were in early trouble against the Braves, resuming at 3/32, chasing Baden Powell’s first innings total of 165. Things didn’t get much better for Mt Martha, bowled out for just 66 with Brett Wilkinson top scoring with 14. Michael Ballard was on fire for the Braves with 6/20 from 15.5 overs. Main Ridge skipper Gareth Wyatt turned back the clock and scored 131 for his side to help them to victory against Flinders. On a week where it was announced that former Victorian Sheffield Shield player and Sorrento coach Nick Jewell had signed with the club for two years from next season, the Ridge

were up and about on Saturday. Chasing 128 for victory, the Ridge resumed at 3/32 with Shaun Foster on 41. He finished with 70 while Wyatt dominated at the other end. Sam Lyons provided wonderful support also with a fine 64. Main Ridge finished at 8/291. Matty Burns was the pick of the Sharks’ bowlers with 3/26 from 15 overs. Red Hill recorded an easy victory against Heatherhill. Defending 201, Red Hill had its opponent 2/17 overnight. The Hills were eventually rolled for just 106 with Brett Maxwell top scoring with 28. Simon Dart collected 4/16 for the Hills off eight overs and Glenn Collett helped himself to 4/53 from 18 overs.

Demons get their first win

By IT Gully RYE avoided a reverse outright attempt by Seaford to win its first game of the season in MPCA District cricket. Resuming at 5/111 on day two of the match and chasing Seaford’s first innings total of 74, Rye was eventually bowled out for 150, giving them a 76-run first innings lead. Seaford was always going to go for a reverse outright and scored 7/214 in 38 overs before sending Rye back into bat. Faisal Payenda smashed 92 and Chris Cleef hit 63 in Seaford’s second innings. Just needing to bat out the remainder of the day, Rye was able to hang