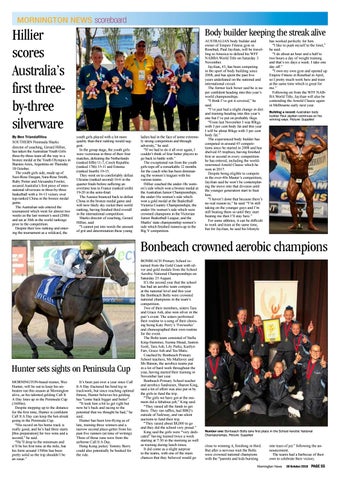 Hillier scores Australia’s first threeby-three silverware By Ben Triandafillou SOUTHERN Peninsula Sharks director of coaching, Gerard Hillier, has taken the Australian Youth Girls three-by-three team all the way to a bronze medal at the Youth Olympics in Buenos Aires, Argentina on Thursday 18 October. The youth girls side, made up of Suzi-Rose Deegan, Sara-Rose Smith, Ruby Porter and Alexandra Fowler, secured Australia’s first piece of international silverware in three-by-three basketball with a 16-13 victory over top-ranked China in the bronze medal game. The Australian side entered the tournament which went for almost two weeks as the last women’s seed (20th) and sat at 36th in the world rankings prior to the competition. Despite their low ranking and entering the tournament as a wildcard, the

youth girls played with a lot more quality than their ranking would suggest. In the group stage, the youth girls were victorious in three of their four matches, defeating the Netherlands (ranked fifth) 11-7, Czech Republic (ranked 17th) 15-11 and Estonia (ranked fourth) 19-15. They went on to comfortably defeat Ukraine (ranked second) 16-6 in the quarter finals before suffering an overtime loss to France (ranked sixth) 19-20 in the semi-final. The Aussies bounced back to defeat China in the bronze medal game and will now likely sky rocket their world ranking, having finished third overall in the international competition. Sharks director of coaching, Gerard Hillier, said “I cannot put into words the amount of grit and determination these young

AUSTRALIAN body builder and owner of Empire Fitness gym in Rosebud, Paul Jayilian, will be travelling to America to defend his WFF NABBA World Title on Saturday 3 November. Jayilian, 43, has been competing in the sport of body building since 2008, and has spent the past five years undefeated on the national and international circuit. The former kick boxer said he is super confident heading into this year’s world championships. “I think I’ve got it covered,” he said. “I’ve just had a slight change in diet and training heading into this year’s one but I’ve put on probably 6kgs. “From last November I was 80kgs with 3 per cent body fat and this year I will be about 86kgs with 3 per cent body fat.” The experienced body builder has competed in around 45 competitions since he started in 2008 and has shelved 45 trophies, having finished first or second in every competition he has entered, including the worldrenowned Arnold Classic which he won in 2017. Despite being eligible to compete in the over-40s Master’s competition, Jayilian said he won’t be contemplating the move into that division until the younger generation start to beat him. “I haven’t done that because there’s no real reason to,” he said. “I’m still taking on the younger guys and I’m still beating them so until they start beating me then I’ll stay here.” For some athletes, it can be difficult to work and train at the same time, but for Jayilian, he said his lifestyle

has worked perfectly for him. “I like to push myself to the limit,” he said. “I do about an hour and a half to two hours a day of weight training and that’s six days a week. I take one day off.” “I own my own gym and opened up Empire Fitness in Rosebud in April, so I pretty much work here and train at the same time which is great for me.” Following on from the WFF NABBA World Title, Jayilian will also be contending the Arnold Classic again in Melbourne early next year. Building a record: Australian body builder Paul Jayilian continues on his winning ways. Picture: Supplied

Hunter sets sights on Peninsula Cup MORNINGTON-based trainer, Wez Hunter, will be out to keep his unbeaten run this season at Mornington alive, as his talented gelding Call It A Day lines up in the Peninsula Cup (1600m). Despite stepping up to the distance for the first time, Hunter is confident Call It A Day can keep the hot-streak going in the Peninsula Cup. “His record on his home track is really good, and he’s had three starts [this preparation] for two wins and a second,” he said. “He’ll drop to the minimum and it’ll be his first time at the mile, but his form around 1500m has been pretty solid so the trip shouldn’t be an issue.”

It’s been just over a year since Call It A Day fractured his hind leg in trackwork, but since reaching optimal fitness, Hunter believes his gelding has “come back bigger and better”. “It took him a bit to get right but now he’s back and racing to the potential that we thought he had,” he said. Hunter has been low-flying as of late, training three winners and a narrow second place-getter from his past five runners (at time of writing). Three of those runs were from the airborne Call It A Day. Hong Kong jockey Tommy Berry could also potentially be booked for the ride.

BONBEACH Primary School returned from the Gold Coast with silver and gold medals from the School Aerobic National Championships on Saturday 25 August. It’s the second year that the school has had an aerobic team compete at the national level and this year the Bonbeach Bolts were crowned national champions in the team’s competition. Two of their members, sisters Tara and Grace Ash, also won silver in the pair’s event. The sisters performed their routine to a song of their choosing being Katy Perry’s ‘Fireworks’ and choreographed their own routine for the event. The Bolts team consisted of Stella King-Stemmer, Sienna Shead, Jasmin Scott, Tara Ash, Lily Parks, Kaitlyn Farr, Grace Ash and Tea Matic. Coached by Bonbeach Primary School teachers, Ms Mullavey and Ms Batson, the aerobics teams put in a lot of hard work throughout the year, having started their training in November last year. Bonbeach Primary School teacher and aerobics fundraiser, Sharon King, said a lot of effort was also put in by the girls to fund the trip. “The girls we have got at the moment did a fabulous job,” King said. “They raised all the funds to get there. They ran raffles, had BBQ’s outside of Safeway, and ran silent auctions to fund their trip. “They raised about $8,000 to go and they did the school very proud.” King said the girls were “very dedicated” having trained twice a week starting at 7:30 in the morning as well as training during lunch times. It did come as a slight surprise to the teams, with one of the main chances that they believed would go

close to winning it, finishing in third. But after a nervous wait the Bolts were crowned national champions with the “parents and kids bursting

into tears of joy” following the announcement. The teams had a barbecue of their own to celebrate their victory.