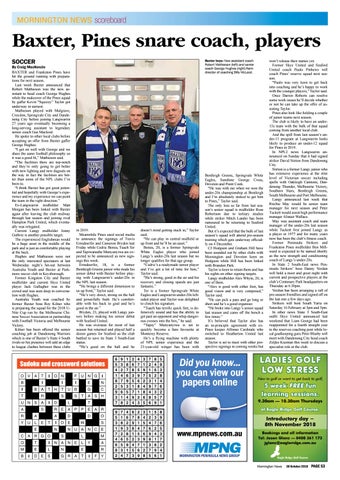 By Craig MacKenzie BAXTER and Frankston Pines have hit the ground running with preparations for next season. Last week Baxter announced that Robert Mathieson was the new assistant to head coach George Hughes while the makeover of the Pines squad by gaffer Kevin “Squizzy” Taylor got underway in earnest. Mathieson played with Mulgrave, Croydon, Springvale City and Dandenong City before joining Langwarrin 27 years ago eventually becoming a long-serving assistant to legendary senior coach Gus Macleod. He spoke to other local clubs before accepting an offer from Baxter gaffer George Hughes. “I get on well with George and we share the same football philosophy so it was a good fit,” Mathieson said. “The facilities there are top-notch and they’re only going to get better with new lighting and new dugouts on the way in fact the facilities are better than some of the NPL clubs I’ve been to. “I think Baxter has got great potential and hopefully with George’s experience and my experience we can point the team in the right direction.” Ex-Langwarrin midfielder Matt Morgan has been linked with Baxter again after leaving the club midway through last season and joining rival Hampton Park United, which eventually was relegated. Current Langy midfielder Jonny Guthrie is another possible target. The experienced Englishman would be a huge asset in the middle of the park and is just as comfortable playing at the back. Hughes and Mathieson were not the only interested spectators at last Wednesday night’s hit-out between Australia Youth and Baxter at Parkmore soccer club in Keysborough. Former Kingston City and Baxter midfielder and current Skye United player Jack Gallagher was in the crowd and was seen deep in conversation with Hughes. Australia Youth was coached by former Baxter boss Roy Kilner who is preparing the squad for the 2018 UNite Cup run by the Melbourne Chinese Soccer Association in partnership with Football Victoria and Melbourne Victory. Kilner has been offered the senior coaching job at Dandenong Warriors which is one of Baxter’s State 4 South rivals so his presence will add an edge to league clashes between these clubs

in 2019. Meanwhile Pines used social media to announce the signings of Travis Ernsdoerfer and Cameron Bryden last Friday while Cedric Benza, Tuach Ter and Tapiwanashe Munyanyiwa are expected to be announced as new signings this week. Ernsdoerfer, 18, is a former Bentleigh Greens junior who made his senior debut with Baxter before playing with Langwarrin’s under-20s in the NPL last season. “He brings a different dimension to us up front,” Taylor said. “He’s very direct, strong on the ball and powerfully built. He’s comfortable with his back to goal and he’s good in the air.” Bryden, 23, played with Langy juniors before making his senior debut with Seaford United. He was overseas for most of last season but returned and played half a dozen games for Seaford as the club battled to save its State 3 South-East status. “He’s good on the ball and he

doesn’t mind getting stuck in,” Taylor said. “He can play in central midfield or up front and he’ll be an asset.” Benza, 20, is a former Springvale White Eagles player who joined Langy’s under-20s last season but no longer qualifies for that age group. “Cedric’s a readymade senior player and I’ve got a lot of time for him,” Taylor said. “He’s strong, good in the air and his recovery and closing speeds are just fantastic.” Ter is a former Springvale White Eagles and Langwarrin under-20s leftsided player and Taylor was delighted to clinch his signature. “Tuach has terrific quick feet, is defensively sound and has the ability to get past an opponent and whip dangerous crosses into the box,” he said. “Tapsy” Munyanyiwa is set to quickly become a fans favourite at Monterey Reserve. He’s a flying machine with plenty of NPL senior experience and the 21-year-old winger has been with

Bentleigh Greens, Springvale White Eagles, Sunshine George Cross, Doveton and Point Cook. “He was with me when we won the under-20s championship at Bentleigh and I’m absolutely stoked to get him to Pines,” Taylor said. The only loss so far from last season’s senior squad is midfielder Ross Robertson due to tertiary studies while striker Mitch Lander has been rumoured to be returning to Seaford United. But it’s expected that the bulk of last season’s squad will attend pre-season training which gets underway officially on 4 December. CJ Hodgson and Graham Hill have been sounded out by other clubs with Mornington and Doveton keen on Hodgson while Hill has been linked with Brandon Park. Taylor is keen to retain them and has his sights on other signing targets. Langy midfielder Alex Whyte, 20, is one of them. “Alex is good with either foot, has good vision and is very composed,” Taylor said. “He can pick a pass and go long or short and he’s a good organiser. “He broke into Langy’s senior squad last season and came off the bench a few times.” It’s believed that Taylor also has an in-principle agreement with exPines keeper Alfonso Cardinale who switched to Heatherton United last season. Taylor is set to meet with other prospective signings in coming weeks but

won’t release their names yet. Former Skye United and Seaford United coach Paulo Pinheiro will coach Pines’ reserve squad next season. “Paulo was very keen to get back into coaching and he’s happy to work with the younger players,” Taylor said. Once Darren Roberts can resolve some work issues he’ll decide whether or not he can take up the offer of assisting Taylor. Pines also look like fielding a couple of junior teams next season. The club is likely to have an under15s team with the bulk of that squad coming from another local club. And the spill from last season’s under-11 program at Langwarrin looks likely to produce an under-12 squad for Pines in 2019. In NPL2 news Langwarrin announced on Sunday that it had signed striker David Stirton from Dandenong City. Stirton is a former Langy junior who has extensive experience at the elite level of Victorian soccer including spells with Oakleigh Cannons, Dandenong Thunder, Melbourne Victory, Southern Stars, Bentleigh Greens, South Melbourne and Port Melbourne. Langy announced last week that Ritchie May would be senior team manager for next season and Peter Tuckett would assist high performance manager Alistair Wallace. May was assistant coach and team manager of the under-20s last season while Tuckett first joined Langy as a player in 1977 and for many years now has been the club’s fitness coach. Former Peninsula Strikers and Frankston Pines midfielder Ben Millward is expected to be named shortly as the new strength and conditioning coach of Langy’s under-20s. In State 2 South-East news Peninsula Strikers’ boss Danny Verdun will hold a meet and greet night with current and prospective players at the club’s Centenary Park headquarters on Thursday at 6.30pm. Verdun has been arranging a raft of pre-season friendlies and signed off on the last one a few days ago. Strikers will host South Yarra on Saturday 16 February at 3pm and 5pm. In other news State 3 South-East outfit Skye United announced last weekend that Liam George had been reappointed for a fourth straight year to the reserves coaching post while local goalkeeping guru Peter Blasby will meet with Dandenong City head coach Zeljko Kuzman this week to discuss a specialist role at the club.

LADIES GOLF LOW STRESS New to golf or want to get back to golf,