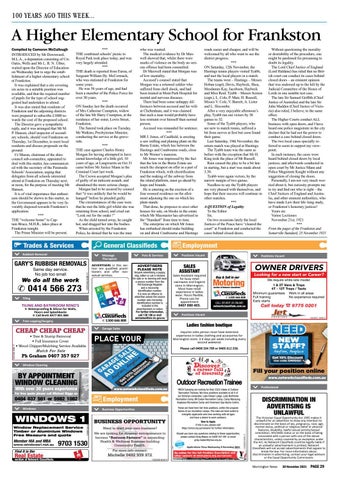 A Higher Elementary School for Frankston *** THE combined schools’ picnic to Royal Park took place today, and was very largely attended. *** THE death is reported from Euroa, of Sergeant William Hy. McCormack, who was stationed at Frankston for some years. He was 56 years of age, and had been a member of the Police Force for over 30 years. *** ON Sunday last the death occurred of Mrs Catherine Crampton, widow of the late Mr Harry Crampton, at the residence of her sister, Lewis Street, Frankston. The funeral took place on Tuesday, Mr Watkins, Presbyterian Minister, conducting the service at the graveside. *** THE case against Charles Henry Morgan for having attempted to have carnal knowledge of a little girl, 10 years of age, at Langwarrin on Oct 31 came before Mr Justice Mann in the Criminal Court last week. The Crown accepted Morgan’s plea of guilty of an indecent assault, and abandoned the more serious charge. Morgan had to be assured by counsel that “it was unlikely that be would be hanged” before he pleaded guilty. The circumstances of the case were that he met the little girl whilst she was returning from school, and cried out “Look out for the snake !” As the child turned away, he caught her, and dragged her into the bushes. When arrested by the Frankston Police, he denied that he was the man

We do all the work

Buy &amp; Sell in our

requires sales person must have extensive experience in ladies clothing and accessories for Mornington store. 3-4 days per week including every second weekend.

With over 30 years experience

Looking for a new start or Career?

Without questioning the morality or desirability of the procedure, one might be pardoned for presuming to doubt its legality. The Lord Chief Justice of England (Lord Haldane) has ruled that no British court can conduct its cases behind closed doors – an eminent opinion that was endorsed up to the hilt by the Judicial Committee of the House of Lords in one notable test case. The late Sir Samuel Griffith (Chief Justice of Australia) and the late Sir John Madden (Chief Justice of Victoria) also ruled, I believe, to the same effect. The Higher Courts conduct ALL business with open doors, and I have heard one police magistrate in the city declare that he had not the power to conduct a case behind closed doors. The two local cases specially referred to seem to support my viewpoint. In each instance, the cases were heard behind closed doors by local justices, and afterwards conducted in open court by Mr Justice Mann and Police Magistrate Knight without any suggestion of closing the doors. Personally, I am not very much worried about it, but curiosity prompts me to try and find out who is right – the Chief Justices of England and Australia, and other eminent authorities, who have made Law their life–long study, or Frankston’s honorary justices! Yours etc Varioe Lectiones November 21st, 1921 *** From the pages of the Frankston and Somerville Standard, 25 November 1921

roads easier and cheaper, and will be welcomed by all who want to see the district progress. *** ON Saturday, 12th November, the Hastings tennis players visited Tyabb, and met the local players in a match. The teams were – Hastings – Messrs Hoban (capt), Davis, Haybeck, Shea, Mesdames Kay, Jacobson, Haybeck and Miss Reid. Tyabb – Messrs Sexton (capt.), L. Cole, P. Mair, H. Russell, Misses V. Cole, V. Barrett, A. Lister and L. Slocombe. After a very enjoyable afternoon’s play, Tyabb ran out victors by 38 games to 32. Some of the Tyabb players, who are new to match tennis, suffered a bit from nerves at first but soon found their game. Last Saturday, 19th November, the return match was played at Hastings. The Tyabb team was the same as before with the exception that Mr H. King took the place of Mr Russell. Rain caused the play to be a bit late in starting, but a start was made about 3.30. Tyabb were again victors, by the narrow margin of two games. Needless to say the Tyabb players are very pleased with themselves, and hope that their success will continue in other matches. *** A QUESTION of Legality To the Editor Sir, On two occasions lately the local Justices of the Peace have “cleared the court” at Frankston and conducted the cases behind closed doors.

YMCA Camping are looking for their 2022 intake of Outdoor Recreation Trainees. We have positions available at all 6 of our Victorian campsites: Lake Dewar Lodge, Lady Northcote Recreation Camp, Mt Evelyn Recreation Camp, Camp Manyung, Anglesea Recreation Camp and Howmans Gap Alpine Centre. These are ﬁxed term full-time positions, within the program teams at our recreation camps. The roles are best suited to energetic applicants who love working with all ages and have a desire to work outdoors. How to Apply If this is you, please visit https://ymca.org.au/careers/ for further information. Should you have any questions relating to these opportunities, please contact Greg Mason on 0409 337 091 or email greg.mason@ymca.org.au. Applications Close Wednesday 8 December 2021. Go online for the full Position Description and other careers at www.ymca.org.au/careers

DISCRIMINATION IN ADVERTISING IS UNLAWFUL

who was wanted. The medical evidence by Dr Maxwell showed that, whilst there were marks of violence on the body no serious offence had been committed. Dr Maxwell stated that Morgan was of low mentality. Accused’s counsel stated that Morgan was a returned soldier who suffered from shell shock, and had been treated at Mont Park Hospital for mental and nervous diseases. There had been some unhappy differences between accused and his wife at Cheltenham, and it was claimed that such a man would probably have less restraint over himself than normal person. Accused was remanded for sentence. *** MR J. Jones, of Caulfield, is erecting a saw milling and planing plant on the Burns Estate, which lies between the Hastings and Cranbourne roads, close to Mr Werner’s mansion. Mr Jones was impressed by the fact that the lots in the Burns Estate are much the cheapest on offer in a part of Frankston which, with electrification and the making of the subway from the island platform, must go ahead by leaps and bounds. He is entering on the erection of a four roomed residence on the allotment adjoining the one on which his plant stands. That done, he proposes to erect other houses for sale, on blocks in the estate which Mr Macmaster has advertised in the “Standard” from time to time. The enterprise on which Mr Jones has embarked should make building on and about Cranbourne and Hastings

Compiled by Cameron McCullough INTRODUCED by Mr Downward, M.L.A., a deputation consisting of Crs. Oates, Wells and Mr L. R. N. Utber, waited upon the Director of Education on Wednesday last to urge the establishment of a higher elementary school at Frankston. It was explained that a site covering six acres in a suitable position was available, and that the required number of pupils for the type of school suggested had undertaken to attend. It was also stated that residents of Frankston and the adjoining districts were prepared to subscribe £1000 towards the cost of the proposed school. The Director gave a sympathetic reply, and it was arranged that Mr M. P. Hansen, chief inspector of secondary schools, should visit Frankston on Thursday, 1st December, to meet local residents and discuss proposals on the ground. Cr Mason, chairman of the shire council sub-committee, appointed to deal with this matter, has communicated with the secretary of the Peninsula Schools’ Association, urging that delegates from all schools interested attend at Frankston on Thursday next, at noon, for the purpose of meeting Mr Hansen. It is of vital importance that enthusiasm should be shown in this matter, as the Government appears to be very favorably disposed towards Frankston’s application. *** THE “welcome home” to Captain Bruce, M.H.R., takes place at Frankston tonight. The Prime Minister will be present.

The Victorian Equal Opportunity Act 1995 makes it unlawful for an advertiser to show any intention to discriminate on the basis of sex, pregnancy, race, age, marital status, political or religious belief or physical features, disability, lawful sexual activity/sexual orientation, HIV/AIDS status or on the basis of being associated with a person with one of the above characteristics, unless covered by an exception under the Act. As Network Classifieds could be legally liable if an unlawful advertisement is printed, Network Classifieds will not accept advertisements that appear to break the law. For more information about discrimination in advertising, contact your legal advisers or the Equal Opportunity Commission.