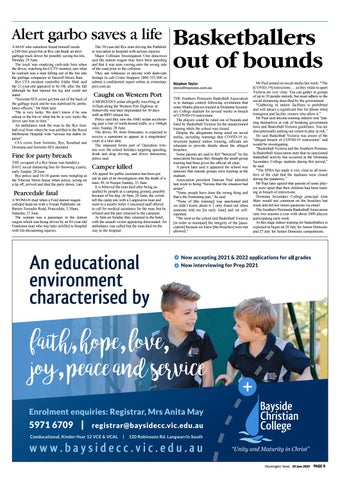 Alert garbo saves a life A MAN who somehow found himself inside a 240-litre green bin at Rye can thank an alert garbage truck driver for possibly saving his life, Monday 29 June. The truck was emptying curb-side bins when the driver, watching his CCTV monitor, saw what he realised was a man falling out of the bin into the garbage compactor in Tarawill Street, 8am. Rye CFA incident controller Eddie Matt said the 21-year-old appeared to be OK after the fall although he had injured his leg and could not stand. “Sorrento SES crews got him out of the back of the garbage truck and he was stabilised by ambulance officers,” Mr Matt said. “He is very lucky. We don’t know if he was asleep in the bin or what but he is very lucky the driver saw him in time.” An ambulance took the man to the Rye football oval from where he was airlifted to the Royal Melbourne Hospital with “serious but stable injuries”. CFA crews from Sorrento, Rye, Rosebud and Dromana and Sorrento SES attended.

Fine for party breach THE occupant of a Rye house was handed a $1652 social distancing fine for throwing a party, early Sunday 28 June. Rye police said 16-18 guests were mingling at the Tiberius Street house when police, acting on a tip off, arrived and shut the party down, 1am.

Pearcedale fatal A WOMAN died when a Ford station wagon collided head-on with a Nissan Pathfinder on Baxter-Tooradin Road, Pearcedale, 5.30pm, Saturday 27 June. The woman was a passenger in the station wagon which was being driven by an 81-year-old Frankston man who was later airlifted to hospital with life-threatening injuries.

The 39-year-old Rye man driving the Pathfinder was taken to hospital with serious injuries. Major Collision Investigation Unit detectives said the station wagon may have been speeding and that it was seen veering onto the wrong side of the road prior to the collision. They ask witnesses or anyone with dash-cam footage to call Crime Stoppers 1800 333 000 or submit a confidential report online at crimestoppers.com.au

Caught on Western Port A MERCEDES sedan allegedly travelling at 165kph along the Western Port Highway at Somerville was later impounded for 30 days with an $895 release fee. Police said they saw the AMG sedan accelerating past a line of north-bound traffic in a 100kph zone, Sunday 28 June. The driver, 49, from Doncaster, is expected to receive a summons to appear at a magistrates’ court at a later date. The impound forms part of Operation Artemis over the school holidays targeting speeding, drink and drug driving, and driver distraction, police said.

Camper killed AN appeal for public assistance has been put out as part of an investigation into the death of a man, 49, in Noojee Sunday, 21 June. It is believed the man died after being assaulted by people at a camping ground, possibly because of his dog. At 9pm, 20 June, the victim left the camp site with a Langwarrin man and went to a nearby hotel. Concerned staff offered to call for medical assistance for the man, but he refused and the pair returned to the campsite. At 9pm on Sunday they returned to the hotel, with the assault victim appearing disoriented. An ambulance was called but the man died on the way to the hospital.

Basketballers out of bounds Stephen Taylor steve@mpnews.com.au THE Southern Peninsula Basketball Association is in damage control following revelations that some Sharks players trained at Dromana Secondary College stadium for several weeks in breach of COVID-19 restrictions. The players could be ruled out of bounds and fined by Basketball Victoria for the unsanctioned training while the school was closed. Despite the allegations being aired on social media, including warnings that COVID-19 restrictions banned indoor training, officials are reluctant to provide details about the alleged breaches. Some parents are said to feel “betrayed” by the association because they thought the small-group training had been given the official all clear. A parent later said it appeared the school was unaware that outside groups were training at the stadium. Association president Damian Paul admitted last week to being “furious that the situation had arisen”. “Some people have done the wrong thing and that’s the frustrating part,” he said. “None of [the training] was sanctioned and we didn’t know about it. I only found out when someone told me [in early June] and we selfreported. “We went to the school and Basketball Victoria [in order to maintain] the integrity of the [association] because we knew [the breaches] were not allowed.”

Mr Paul posted on social media last week: “The [COVID-19] restrictions … as they relate to sport Victoria are very clear: You can gather in groups of up to 20 people outside, but must adhere to the social distancing described by the government. “Gathering in indoor facilities is prohibited and will attract a significant fine for [those who] transgress and facility owners who allow it.” Mr Paul said anyone training indoors was “putting themselves at risk of breaking government laws and Basketball Victoria guidelines. You are also potentially putting our return to play at risk.” He said Basketball Victoria was aware of the “alleged breach of COVID-19 restrictions” and would be investigating. “Basketball Victoria and the Southern Peninsula Basketball Association state that no sanctioned basketball activity has occurred at the Dromana Secondary College stadium during this period,” he said. “The SPBA has made it very clear to all members of the club that the stadiums were closed during the pandemic.” Mr Paul later agreed that parents of some players were upset that their children had been training in breach of restrictions. Dromana Secondary College principal Alan Marr would not comment on the breaches last week and did not return questions via email. The Southern Peninsula Basketball Association runs two seasons a year with about 3000 players participating each week. At this stage indoor training for basketballers is expected to begin on 20 July for Junior Domestic and 27 July for Senior Domestic competitions.