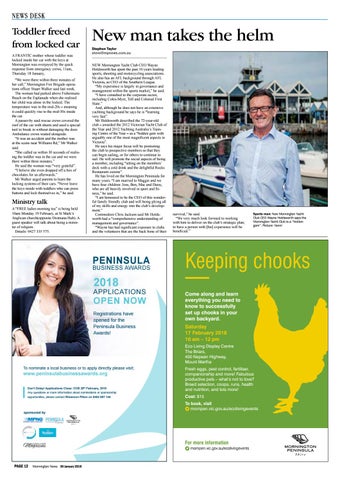 Toddler freed from locked car A FRANTIC mother whose toddler was locked inside her car with the keys at Mornington was overjoyed by the quick response from emergency crews, 11am, Thursday 18 January, “We were there within three minutes of her call,” Mornington Fire Brigade operations officer Stuart Walker said last week. The woman had parked above Fishermans Beach on the Esplanade when she realised her child was alone in the locked. The temperature was in the mid-20s – meaning it could quickly rise to the mid-30s inside the car. A passer-by said rescue crews covered the roof of the car with sheets and used a special tool to break in without damaging the door. Ambulance crews waited alongside. “It was an accident and the mother was at the scene near Williams Rd,” Mr Walker said. “She called us within 30 seconds of realising the toddler was in the car and we were there within three minutes.” He said the woman was “very grateful”. “I believe she even dropped off a box of chocolates for us afterwards.” Mr Walker urged parents to learn the locking systems of their cars. “Never leave the keys inside with toddlers who can press buttons and lock themselves in,” he said.

Ministry talk A “FREE ladies morning tea” is being held 10am Monday 19 February, at St Mark’s Anglican church(opposite Dromana Hub). A guest speaker will talk about being a minister of religion. Details: 0427 335 575.

New man takes the helm Stephen Taylor steve@mpnews.com.au NEW Mornington Yacht Club CEO Wayne Holdsworth has spent the past 10 years leading sports, shooting and motorcycling associations. He also has an AFL background through AFL Victoria, as CEO of the Southern League. “My experience is largely in governance and management within the sports market,” he said. “I have consulted to the corporate sector, including Coles-Myer, Toll and Colonial First State.” And, although he does not have an extensive yachting background he says he is “learning very fast”. Mr Holdsworth described the 72-year-old club – awarded the 2012 Victorian Yacht Club of the Year and 2012 Yachting Australia’s Training Centre of the Year – as a “hidden gem with arguably one of the most magnificent aspects in Victoria”. He says his major focus will be promoting the club to prospective members so that they can begin sailing, or for others to continue to sail. He will promote the social aspects of being a member, including “sitting on the members’ deck with a cold drink and the delightful Rocks Restaurant cuisine”. He has lived on the Mornington Peninsula for many years. “I am married to Maggie and we have four children: Joss, Ben, Mac and Daisy, who are all heavily involved in sport and fitness,” he said. “I am honoured to be the CEO of this wonderful family friendly club and will being plying all of my skills and energy into the club’s development.” Commodore Chris Jackson said Mr Holdsworth had a “comprehensive understanding of management and governance”. “Wayne has had significant exposure to clubs and the volunteers that are the back bone of their

survival,” he said. “We very much look forward to working with him to deliver on the club’s strategic plan; to have a person with [his] experience will be beneficial.”

OPEN NOW Registrations have opened for the Peninsula Business Awards!

Come along and learn everything you need to know to successfully set up chooks in your own backyard. Saturday 17 February 2018 10 am – 12 pm Eco Living Display Centre The Briars, 450 Nepean Highway, Mount Martha

To nominate a local business or to apply directly please visit;