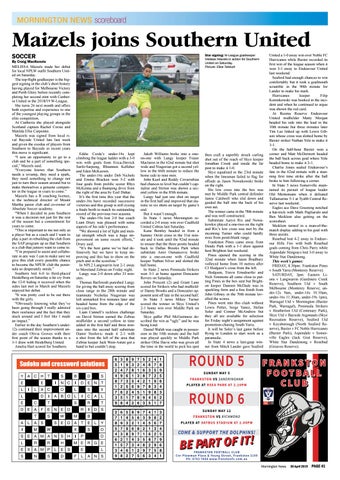 By Craig MacKenzie MELISSA Maizels made her debut for local NPLW outfit Southern United on Saturday. The top-flight goalkeeper is the biggest signing in the club’s short history having played for Melbourne Victory and Perth Glory before recently completing her second stint with Canberra United in the 2018/19 W-League. She turns 26 next month and offers both expertise and experience to one of the youngest playing groups in the elite competition. At Canberra she played alongside Scotland captain Rachel Corsie and Matilda Ellie Carpenter. Maizels was signed from local rival Bayside United late last week and given the exodus of players from Southern to Bayside in recent years this move is significant. “I saw an opportunity to go to a club and be a part of something special,” Maizels said. “Everyone knows that Southern needs a revamp, they need a spark, they need something to change not just to turn their season around but to make themselves a genuine competitor in the league in years to come.” Maizels has a B coaching licence, is the technical director of Mount Martha junior club and co-owner of Absolute Soccer academy. “When I decided to join Southern it was a decision not just for the rest of the season but a commitment for years to come. “This is important to me not only as a player but as a coach and I want to play a part in rebuilding the club from the SAP program up so that Southern is a club that juniors want to come to. “I’m prepared to assist and collaborate in any way I can to make sure we give this club every possible chance to become the NPLW club the peninsula so desperately needs.” Southern lost 6-0 to third-placed Heidelberg on Saturday a far cry from the 12-0 hiding it received when the sides last met in March and Maizels enjoyed her debut. “It was pretty cool to be out there with the girls. “Obviously knowing what they’ve been going through I really admired their resilience and the fact that they stuck around and I feel like I made an impact.” Earlier in the day Southern’s under12s continued their improvement under coach Olivia Groves with their first point of the season thanks to a 1-1 draw with Heidelberg United. Amelia Hart scored for Southern.

Eddie Cerda’s under-14s kept climbing the league ladder with a 3-0 win with goals from Erica-Derrick Sarfo-Sarpong, Rhiannon Kelleher and Eden McKeown. The under-16s under Deb Nichols and Emma Bracken won 5-2 with four goals from prolific scorer Rhys McKenna and a thumping drive from the right of the area by Ezel Duhar. It’s the first time this year that the under-16s have recorded successive victories and this group is still eyeing a finals berth to match its outstanding record of the previous two seasons. The under-19s lost 2-0 but coach Liam Drury was pleased with some aspects of his side’s performance. “We showed a lot of fight and mental strength which was a huge improvement on some recent efforts,” Drury said. “It’s the best game we’ve had defensively but we have to keep improving and this has to show on the pitch and in the scoreline.” In NPL2 Langwarrin lost 2-1 away to Moreland Zebras on Friday night. Langy was 2-0 down after 33 minutes. Thomas Barforosh punished Langy for giving the ball away scoring from close range in the 28th minute and teammate Nicholas Niagorian was left unmarked five minutes later and headed home from the edge of the six-yard box. Liam Cannell’s reckless challenge on David Stirton earned the Zebras midfielder a second yellow in time added in the first half and three minutes into the second half substitute Damir Stoilovic made it 2-1 with a shot from the left of the area that Zebras keeper Jack West-Astuti got a hand to but couldn’t stop.

Jakob Williams broke into a oneon-one with Langy keeper Fraser Maclaren in the 62nd minute but shot wide and Niagorian got a second yellow in the 66th minute to reduce the home side to nine men. John Kuol and Roddy Covarrubias had chances to level but couldn’t capitalise and Stirton was shown a second yellow in the 85th minute. Langy had just one shot on target in the first half and improved that statistic to six shots on target by game’s end. But it wasn’t enough. In State 1 news Mornington recorded a 2-0 away win over Caulfield United Cobras last Saturday. Kane Bentley headed in from a Sammy Orritt cross in the 31st minute and it took until the 92nd minute to ensure that the three points headed back to Dallas Brooks Park when substitute Amir Osmancevic broke into a one-on-one with Caulfield keeper Nathan Silver and slotted the ball home. In State 2 news Peninsula Strikers won 3-1 at home against Doncaster Rovers on Saturday. John Prescott (2) and Grant Lane scored for Strikers who had midfielder Danny Brooks and a Doncaster opponent sent off late in the second half. In State 3 news Mikey Turner scored the winner in Skye United’s 2-1 home win over Middle Park on Saturday. Skye gaffer Phil McGuinness described the win as “ugly” and he was being kind. Daniel Walsh was caught in possession in the 10th minute and the ball was played quickly to Middle Park striker Ollie Davis who was given all the time in the world to pick his spot

then craft a superbly struck curling shot out of the reach of Skye keeper Jonathan Crook and inside the far post to make it 1-0. Skye equalised in the 23rd minute when the linesman failed to flag for offside as Jason Nowakowski broke on the right. His low cross into the box was met by Middle Park central defender Jamie Caldwell who slid down and guided the ball into the back of his own net. The winner came in the 78th minute and was well constructed. Substitute Aaryn Rix and Nowakowksi played a one-two on the right and Rix’s low cross was met by the incoming Turner who could hardly miss from point-blank range. Frankston Pines came away from Dendy Park with a 1-1 draw against host Brighton last weekend. Pines opened the scoring in the 32nd minute when Jason Bradbury volleyed home from 10 metres after CJ Hodgson’s cross from the left. Hodgson, Travis Ernsdoerfer and Nick Simmons all came close to putting Pines in the box seat but Brighton keeper Damien McDade was in sparkling form and a fine finish from John Gibney in the 70th minute levelled the scores. Pines went into this clash without Lewis Potter, Serge Yanez, Stefan Soler and Connor McAndrew but they all are available for selection for Friday night’s assignment against promotion-chasing South Yarra. It will be Soler’s last game before flying to London to start work as a paramedic. In State 4 news a last-gasp winner from Mitch Lander gave Seaford