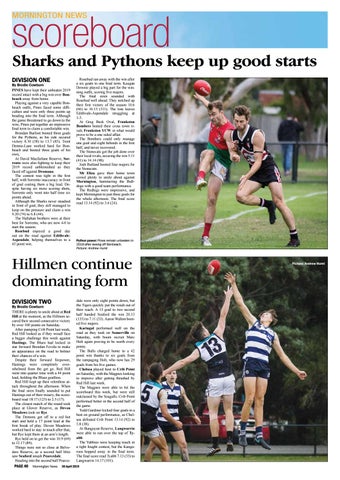 Sharks and Pythons keep up good starts DIVISION ONE

By Brodie Cowburn PINES have kept their unbeaten 2019 record intact with a big win over Bonbeach away from home. Playing against a very capable Bonbeach outfit, Pines faced some difficulties and were only three points up heading into the final term. Although the game threatened to go down to the wire, Pines put together an impressive final term to claim a comfortable win. Brendan Barfoot booted three goals for the Pythons, as his side secured victory 8.10 (58) to 13.7 (85). Trent Dennis-Lane worked hard for Bonbeach and booted three goals of his own, At David Macfarlane Reserve, Sorrento were also fighting to keep their 2019 record unblemished as they faced off against Dromana. The contest was tight in the first half, with Sorrento inaccuracy in front of goal costing them a big lead. Despite having six more scoring shots, Sorrento only went into half time six points ahead. Although the Sharks never steadied in front of goal, they still managed to keep on the pressure and claim a win 9.20 (74) to 6.8 (44). The Hallahan brothers were at their best for Sorrento, who are now 4-0 to start the season. Rosebud enjoyed a good day out on the road against EdithvaleAspendale, helping themselves to a 45 point win.

Rosebud ran away with the win after a six goals to one final term. Keegan Downie played a big part for the winning outfit, scoring five majors. The final siren sounded with Rosebud well ahead. They notched up their first victory of the season 10.6 (66) to 16.15 (111). The loss leaves Edithvale-Aspendale struggling at 1-3. At Greg Beck Oval, Frankston Bombers hosted their cross town rivals Frankston YCW in what would prove to be a one sided affair. The Bombers could only manage one goal and eight behinds in the first half, and never recovered. The Stonecats got the job done over their local rivals, securing the win 5.11 (41) to 14.14 (98). Josh Butland booted four majors for the Stonecats. Mt Eliza gave their home town crowd plenty to smile about against Mornington, hammering the Bulldogs with a good team performance. The Redlegs were impressive, and kept Mornington to just three goals for the whole afternoon. The final score read 13.14 (92) to 3.6 (24).

By Brodie Cowburn THERE is plenty to smile about at Red Hill at the moment, as the Hillmen secured their second consecutive victory by over 100 points on Saturday. After pumping Crib Point last week, Red Hill looked as if they woudl face a bigger challenge this week against Hastings. The Blues had locked in star forward Brendan Fevola to make an appearance on the road to bolster their chances of a win. Despite their forward firepower, Hastings were completely overwhelmed from the get go. Red Hill went into quarter time with a 44 point lead, holding the Blues goalless. Red Hill kept up their relentless attack throughout the afternoon. When the final siren finally sounded to put Hastings out of their misery, the scoreboard read 18.17 (125) to 2.5 (17). The closest match of the round took place at Glover Reserve, as Devon Meadows took on Rye. The Demons got off to a red hot start and held a 17 point lead at the first break of play. Devon Meadows worked hard to stay in touch after that, but Rye kept them at an armâ&amp;#x20AC;&amp;#x2122;s length. Rye held on to get the win 10.9 (69) to 12.17 (89). Things were not so close at Belvedere Reserve, as a second half blitz saw Seaford smash Pearcedale. Heading into the second half Pearce-

dale were only eight points down, but the Tigers quickly put the result out of their reach. A 13 goal to two second half handed Seaford the win 20.15 (135) to 7.11 (53). Aaron Walton booted five majors. Karingal performed well on the road as they took on Somerville on Saturday, with boom recruit Marc Holt again proving to be worth every penny. The Bulls charged home to a 42 point win thanks to six goals from the rampaging Holt, who now has 29 goals from his five games. Chelsea played host to Crib Point on Saturday, with the Magpies looking to improve after getting thrashed by Red Hill last week. The Magpies were able to hit the scoreboard this week, but were still outclassed by the Seagulls. Crib Point performed better in the second half of the game. Todd Gardiner kicked four goals in a best on ground performance, as Chelsea defeated Crib Point 13.14 (92) to 5.8 (38). At Bunguyan Reserve, Langwarrin were able to run over the top of Tyabb. The Yabbies were keeping touch in a tight fought contest, but the Kangaroos hopped away in the final term. The final score read Tyabb 7.13 (55) to Langwarrin 14.17 (101).