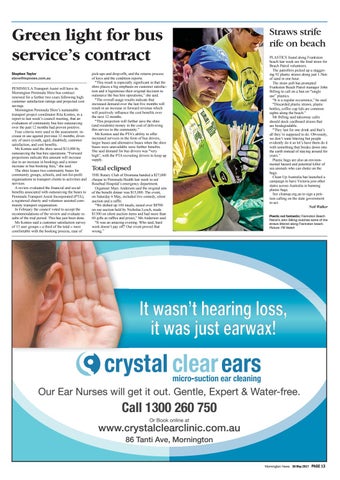 Green light for bus service’s contract Stephen Taylor steve@mpnews.com.au PENINSULA Transport Assist will have its Mornington Peninsula Shire bus contract renewed for a further two years following high customer satisfaction ratings and projected cost savings. Mornington Peninsula Shire’s sustainable transport project coordinator Rita Kontos, in a report to last week’s council meeting, that an evaluation of community bus hire outsourcing over the past 12 months had proven positive. Four criteria were used in the assessment: increase in use against previous 12 months; diversity of users (youth, aged, disabled); customer satisfaction, and cost benefits. Ms Kontas said the shire saved $13,000 by outsourcing the bus hire operations. “Forward projections indicate this amount will increase due to an increase in bookings and a minor increase in bus booking fees,” she said. The shire leases two community buses for community groups, schools, and not-for-profit organisations to transport clients to activities and services. A review evaluated the financial and social benefits associated with outsourcing the buses to Peninsula Transport Assist Incorporated (PTA), a registered charity and volunteer assisted community transport organisation. In February the council voted to accept the recommendations of the review and evaluate results of the trial period. This has just been done. Ms Kontos said a customer satisfaction survey of 15 user groups – a third of the total – were comfortable with the booking process, ease of

pick-ups and drop-offs, and the returns process of keys and the condition reports. “This result is especially significant in that the shire places a big emphasis on customer satisfaction and it legitimises their original decision to outsource the bus hire operations,” she said. “The overall usage results indicate that increased demand over the last five months will result in an increase in forward revenue which will positively influence the cost benefits over the next 12 months. “This projection will further save the shire (and residents) money in the cost of delivering this service to the community.” Ms Kontos said the PTA’s ability to offer increased services in the form of bus drivers, larger buses and alternative buses when the shire buses were unavailable were further benefits. She said demand for bus drivers was “very high”, with the PTA recruiting drivers to keep up supply.

Total eclipsed THE Rotary Club of Dromana handed a $27,000 cheque to Peninsula Health last week to aid Rosebud Hospital’s emergency department. Organiser Mary Anderson said the original aim of the benefit dinner was $15,000. The event, on Saturday 6 May, included live comedy, silent auction and a raffle. “We dished up 160 meals, raised over $8700 on our auction held by Nicholas Lynch, made $1500 on silent auction items and had more than 60 gifts as raffles and prizes,” Ms Anderson said. “It was an amazing evening. Who said, hard work doesn’t pay off? Our event proved that wrong.”

Straws strife rife on beach PLASTICS found along Frankston beach last week are the final straw for Beach Patrol volunteers. The patrollers picked up a staggering 92 plastic straws along just 1.5km of sand in one hour. The straw poll has prompted Frankston Beach Patrol manager John Billing to call on a ban on “single use” plastics. “It is a regular occurrence,” he said. “Discarded plastic straws, plastic bottles, coffee cup lids are common sights along the beach.” Mr Billing said takeaway cafes should stock cardboard straws that are biodegradable. “They last for one drink and that’s all they’re supposed to do. Obviously, we don’t want littering but people evidently do it so let’s have them do it with something that breaks down into the earth instead of staying around for years.” Plastic bags are also an environmental hazard and potential killer of sea animals who can choke on the bags. Clean Up Australia has launched a campaign to have Victoria join other states across Australia in banning plastic bags. See cleanup.org.au to sign a petition calling on the state government to act. Neil Walker Plastic not fantastic: Frankston Beach Patrol’s John Billing clutches some of the straws littered along Frankston beach. Picture: Fifi Welsh

Our Ear Nurses will get it out. Gentle, Expert & Water-free.