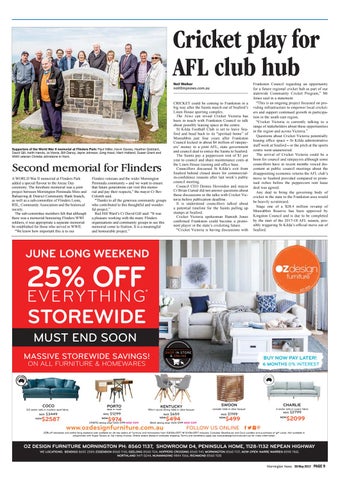 Second memorial for Flinders A WORLD War II memorial at Flinders Park added a special flavour to the Anzac Day ceremony. The foreshore memorial was a joint project between Mornington Peninsula Shire and Balnarring & District Community Bank branch, as well as a sub-committee of Flinders Lions, RSL, Community Association and the historical society. The sub-committee members felt that although there was a memorial honouring Flinders WWI soldiers, it was appropriate a separate memorial be established for those who served in WWII. “We know how important this is to our

Flinders veterans and the wider Mornington Peninsula community – and we want to ensure that future generations can visit this memorial and pay their respects,” the mayor Cr Bev Colomb said. “Thanks to all the generous community groups who contributed to this thoughtful and wonderful project.” Red Hill Ward’s Cr David Gill said: “It was a pleasure working with the many Flinders organisations and community groups to see this memorial come to fruition. It is a meaningful and honourable project.”

CRICKET could be coming to Frankston in a big way after the Saints march out of Seaford’s Linen House sporting complex. The News can reveal Cricket Victoria has been in touch with Frankston Council to talk about possibly leasing space at the centre. St Kilda Football Club is set to leave Seaford and head back to its “spiritual home” of Moorabbin just four years after Frankston Council kicked in about $4 million of ratepayers’ money to a joint AFL, state government and council deal to entice the Saints to Seaford. The Saints pay a peppercorn rent of $1 per year to council and share maintenance costs at the Linen House training and office base. Councillors discussed St Kilda’s exit from Seaford behind closed doors for commercialin-confidence reasons after last week’s public council meeting. Council CEO Dennis Hovenden and mayor Cr Brian Cunial did not answer questions about those discussions or the talks with Cricket Victoria before publication deadline. It is understood councillors talked about a potential timeline for the Saints pulling up stumps at Seaford. Cricket Victoria spokesman Hamish Jones confirmed Frankston could become a prominent player in the state’s cricketing future. “Cricket Victoria is having discussions with

Frankston Council regarding an opportunity for a future regional cricket hub as part of our statewide Community Cricket Program,” Mr Jones said in a statement. “This is an ongoing project focussed on providing infrastructure to empower local cricketers and support continued growth in participation in the south east region. “Cricket Victoria is currently talking to a range of stakeholders about these opportunities in the region and across Victoria.” Questions about Cricket Victoria potentially leasing office space – St Kilda administrative staff work at Seaford – or the pitch at the sports centre went unanswered. The arrival of Cricket Victoria could be a boon for council and ratepayers although some councillors have in recent months voiced discontent at public council meetings about the disappointing economic returns the AFL club’s move to Seaford provided compared to promised riches before the peppercorn rent lease deal was agreed. Any deal to bring the governing body of cricket in the state to the Frankston area would be heavily scrutinised. Stage one of a $28.4 million revamp of Moorabbin Reserve has been approved by Kingston Council and is due to be completed by the start of the 2017-18 AFL season, possibly triggering St Kilda’s official move out of Seaford.

desk in multi WAS

KENTUCKY 90cm round dining table in clear lacquer WAS NOW

www.ozdesignfurniture.com.au 25% off storewide and online long weekend sale available on all new orders of furniture and homewares from 03-06-2017 till 12-06-2017 inclusive. Excludes Glasshouse and Circa candles and purchases of gift cards. Not available in conjunction with Super Savers or Zip money ﬁnance. Online orders discount excludes shipping. Terms and conditions apply see www.ozdesignfurniture.com.au for more information.