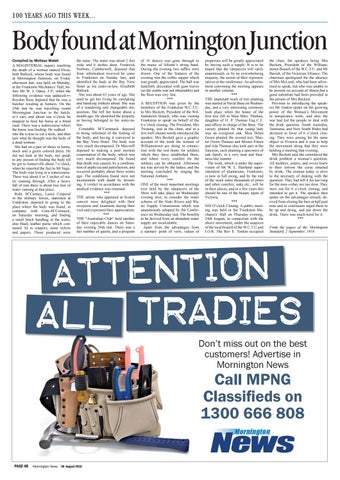 Body found at Mornington Junction Compiled by Melissa Walsh A MAGISTERIAL inquiry touching the death of a woman named Elizabeth Bullock, whose body was found at Mornington Junction, on Friday afternoon last, was held on Monday, at the Frankston Mechanics’ Hall, before Mr W. J. Oates, J P., when the following evidence was adduced:— Roydon Ross deposed that he was a butcher residing at Somers. On the 25th inst he was travelling round Mornington Junction in the butcher’s cart, and about one o’clock he stopped to feed his horse at a blind road. There was a watercourse where the horse was feeding. He walked into the ti-tree to cut a stick, and then saw what he thought was the body of a dead woman. She had on a pair of shoes or boots, stock and a green colored dress. He did not look at the body, nor speak to any person of finding the body till he got to Somerville about 7 o’clock, when he reported the fact to Mr Sago. The body was lying in a watercourse. There was about 4 or 5 inches of water running through. After a heavy fall of rain there is about two feet of water running at that place. Robt. M’Cartney, Lance Corporal in the military forces, stationed at Frankston, deposed to going to the place where the body was found, in company with Cons.M’Cormack, on Saturday morning, and finding a small black handbag in the water, also black leather purse which contained 3d in coppers, some tickets and papers. Those produced were

the same. The water was about 2 feet wide and 6 inches deep. Frederick Norbury, Camberwell, deposed that from information received he came to Frankston on Sunday last, and identified the body at the Bay View Hotel as his sister-in-law, Elizabeth Bullock. She was about 65 years of age. She used to get her living by caretaking and hawking trinkets about. She was of a wandering and changeable disposition. She left her home about a month ago. He identified the property as having belonged to his sister-inlaw. Constable M’Cornmack deposed to being informed of the finding of the body, and having it conveyed to the Bay View Hotel. The body was very much decomposed. Dr Maxwell deposed to making a post mortem examination of the body, which was very much decomposed. He found that death was caused, by a combination of asphyxia and putrefaction, and occurred probably about three weeks ago. The conditions found were not inconsistent with death by drowning. A verdict in accordance with the medical evidence was returned. *** THE artists who appeared at Scotch concert were delighted with their reception and treatment during their visit and expressed their appreciation. *** THE “Australian Club” held another of their enjoyable dances on Saturday evening 26th inst. There was a fair number of guests, and a program

of 16 dances was gone through to the music of Alliette’s string band. During the evening two raffles were drawn. One of the features of the evening was the coffee supper which was greatly appreciated. The hall was tastefully decorated with gum leaves (as the wattle was not obtainable) and the floor was very fast. *** A RECEPTION was given by the members of the Frankston W.C.T.U. to Mrs Beckett, President of the Williamstown branch, who was visiting Frankston to speak on behalf of the 6 o’clock closing. The President, Mrs Twining, was in the chair, and in a few well chosen words introduced the speaker. Mrs Beckett gave a graphic account of the work the women of Williamstown are doing in connection with the rest home for soldiers which they have established there, and where every comfort for the soldiers can be obtained. Afternoon tea was served by the ladies, and the meeting concluded by singing the National Anthem. *** ONE of the most important meetings ever held by the ratepayers of the Shire will take place on Wednesday evening next, to consider the water scheme of the State Rivers and Water Supply Commission which was unanimously adopted by the Conference on Wednesday last. The benefits to be derived from an abundant water supply are incalculable. Apart from the advantages from a sanitary point of view, values of

properties will be greatly appreciated by having such a supply. It is to be hoped that the ratepayers will ratify unanimously or by an overwhelming majority, the action of their representatives at the conference. An advertisment convening the meeting appears in another column. *** THE important work of tree planting was started at Naval Base on Wednesday, and a very interesting ceremony took place when the honor of the first tree fell to Miss Mary Thomas, daughter of O. P. Thomas Esq C.E. and officer in charge of the Base. The variety planted by that young lady was an evergreen oak. Miss Helen Green planted the second tree. Master Owen Thomas and Misses Eileen and Ada Thomas also took part in the function, each planting a specimen of oak family in a very neat and business-like manner. The work, which is under the supervision of Mr W. L. Hartland superintendent of plantations, Frankston, is now in full swing, and by the end of the week some thousands of pines and other conifers, oaks etc., will be in their places, and in a few years this should be one of the beauty spots of Victoria. *** SIX O’clock Closing. A public meeting was held in the Frankston Mechanics’ Hall on Thursday evening, 24th August, in connection with the above movement, under the auspices of the local branch of the W.C.T.U.and I.O.R. The Rev E. Tonkin occupied

the chair, the speakers being Mrs Beckett, President of the Williamstown Branch of the W.C.T.U. and Mr Barratt, of the Victorian Alliance. The chairman apologised for the absence of Mrs McLeod, who had been advertised to speak, but who was unable to be present on account of illness,but a good substitute had been provided in the person of Mrs Beckett. Previous to introducing the speakers Mr Tonkin spoke on the growing power of the Woman’s Movement in temperance work, and also the war had led the people to deal with the drink question. South Australia, Tasmania, and New South Wales had declared in favor of 6 o’clock closing. They were aiming for the same object in Victoria and it was to help the movement along that they were holding a meeting that evening. Mrs Beckett said she considered the drink problem a woman’s question. All mothers, sisters, and wives knew to their sorrow the curse entailed by drink. The woman today is alive to the necessity of dealing with the question. They had left it for too long for the men —they are too slow. They were out for 6 o’clock closing, and intended to get it. The speaker then spoke on the advantages already derived from closing the bars at half past nine and in conclusion urged them to be up and doing, and put down the drink. There was much need for it. *** From the pages of the Mornington Standard, 2 September, 1916