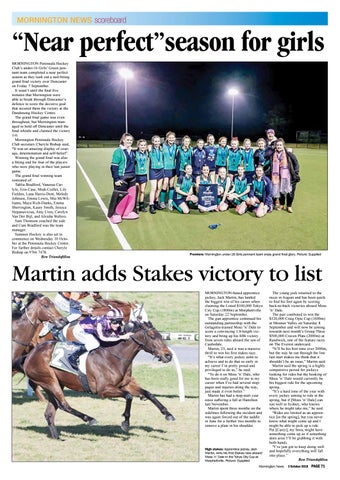 “Near perfect”season for girls MORNINGTON Peninsula Hockey Club’s under-16 Girls’ Green pennant team completed a near perfect season as they took out a nail-biting grand final victory over Doncaster on Friday 7 September. It wasn’t until the final five minutes that Mornington were able to break through Doncaster’s defence to score the decisive goal that secured them the victory at the Dandenong Hockey Centre. The grand final game was even throughout, but Mornington managed to hold off Doncaster until the final whistle and claimed the victory 1-0. Mornington Peninsula Hockey Club secretary Cheryle Bishop said, “It was an amazing display of courage, determination and self-belief”. Winning the grand final was also a fitting end for four of the players who were playing in their last junior game. The grand final winning team consisted of: Tahlia Bradford, Vanessa Carlyle, Erin Case, Miah Coillet, Lily Fielden, Lana Harris-Dent, Melody Johnson, Emma Lewis, Mia McWilliams, Maya Rich-Danks, Emma Sherrington, Kasey Smith, Jessica Stepanavicius, Amy Uren, Carolyn Van Der Bijl, and Aleisha Walters. Sam Thomson coached the side and Cam Bradford was the team manager. Summer Hockey is also set to commence on Wednesday 10 October at the Peninsula Hockey Centre. For further details contact Cheryle Bishop on 9766 7478. Ben Triandafillou

Martin adds Stakes victory to list MORNINGTON-based apprentice jockey, Jack Martin, has landed the biggest win of his career when claiming the Listed $100,000 Tokyo City Cup (1800m) at Morphettville on Saturday 22 September. The gun apprentice continued his outstanding partnership with the Gelagotis-trained Moss ‘n’ Dale to score a convincing 1.9-length victory and bring up his fifth victory from seven rides aboard the son of Castledale. Martin, 23, said it was a massive thrill to win his first stakes race. “It’s what every jockey aims to achieve and to do that so early in my career I’m pretty proud and privileged to do so,” he said. “To do it on Moss ‘n’ Dale, who has been really good for me in my career when I’ve had several stoppages and injuries along the way, just made it even better.” Martin has had a stop-start year since suffering a fall at Hamilton last November. Martin spent three months on the sidelines following the incident and was again forced out of the saddle in June for a further two months to remove a plate in his shoulder.

The young jock returned to the races in August and has been quick to find his feet again by scoring back-to-back victories aboard Moss ‘n’ Dale. The pair combined to win the $120,000 Craig Opie Cup (1600m) at Moonee Valley on Saturday 8 September and will now be aiming towards next month’s Group Three $500,000 Craven Plate (2000m) at Randwick, one of the feature races on The Everest undercard. “It’ll be his first time over 2000m, but the way he ran through the line last start makes me think that it shouldn’t be an issue,” Martin said. Martin said the spring is a highly competitive period for jockeys looking for rides but the booking of Moss ‘n’ Dale would currently be his biggest ride for the upcoming spring. “It’s a hard time of the year with every jockey aiming to ride in the spring, but if [Moss ‘n’ Dale] can run well in Sydney, who knows where he might take me,” he said. “Rides are limited as an apprentice [in the spring], but you never know what might come up and I might be able to pick up a ride. Pat [Carey], my boss, might have something come up so if something does arise I’ll be grabbing it with both hands. “I’ve just got to keep doing well and hopefully everything will fall into place.” Ben Triandafillou