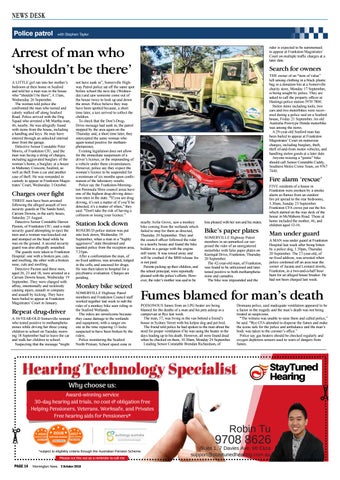 Arrest of man who ‘shouldn’t be there’ A LITTLE girl ran into her mother’s bedroom at their home in Seaford and told her a man was in the house who “shouldn’t be there”, 4.15am, Wednesday 26 September. The woman told police she confronted the man who turned and calmly walked off along Seaford Road. Police arrived with the Dog Squad who arrested a Mt Martha man, 46, nearby. He was allegedly found with items from the house, including a handbag and keys. He may have entered through an unlocked internal door from the garage. Detective Senior Constable Peter Morris, of Frankston CIU, said the man was facing a string of charges, including aggravated burglary of the woman’s home, a burglary at a house in Mahoney Crescent, Seaford, as well as theft from a car and another case of theft. He was remanded in custody to appear at Frankston Magistrates’ Court, Wednesday 3 October.

Charges over fight THREE men have been arrested following the alleged assault of two security guards at The Sands hotel, Carrum Downs, in the early hours, Saturday 25 August. Detective Senior Constable Darren Paxton, of Frankston CIU, said a male security guard attempting to eject the men and a woman was knocked out and stomped on the head while he was on the ground. A second security guard was also allegedly assaulted. The guards were taken to Frankston Hospital: one with a broken jaw, cuts and swelling, the other with a broken nose, cuts and swelling. Detective Paxton said three men, aged 26, 23 and 18, were arrested at a Carrum Downs house, Wednesday 19 September. They were charged with affray, intentionally and recklessly causing injury, assault in company and assault by kicking. They have been bailed to appear at Frankston Magistrates’ Court in January.

Repeat drug-driver A 34-YEAR-OLD Somerville woman who tested positive to methamphetamines while driving her three young children to school on Tuesday morning 18 September had to leave the car and walk her children to school. Suspecting that the message “might

rider is expected to be summonsed to appear at Frankston Magistrates’ Court on multiple traffic charges at a later date.

Search for owners THE owner of an “item of value” left among clothing in a black plastic bag in a donation bin at a Somerville charity store, Monday 17 September, is being sought by police. They are asked to call the property officer at Hastings police station 5970 7800. Stolen items including tools, two cars and two motorbikes were recovered during a police raid on a Seaford house, Friday 21 September. An old Australia Post-type Honda motorbike was among the items. A 29-year-old Seaford man has been bailed to appear at Frankston Magistrates’ Court on numerous charges, including burglary, theft, theft of-and-from motor vehicles, and handling stolen goods at a later date. Anyone missing a “postie” bike should call Senior Constable Caddy, Southern Metro Crime Team, on 9767 7440.

not have sunk in”, Somerville Highway Patrol police sat off the same spot before school the next day (Wednesday) and saw someone come out of the house twice to look up and down the street. Police believe they may have been spotted because, a short time later, a taxi arrived to collect the children. To check that the Don’t-DrugDrive message had sunk in, the patrol stopped by the area again on the Thursday and, a short time later, they intercepted the same woman who again tested positive for methamphetamines. Existing legislation does not allow for the immediate suspension of a driver’s licence, or the impounding of a vehicle under these circumstances. However, police say they expect the woman’s licence to be suspended for a minimum of six months upon confirmation of the laboratory results. Police say the Frankston-Mornington Peninsula Shire council areas have one of the highest drug-driving detection rates in the state. “If you are drug driving, it’s not a matter of if you’ll be detected, it’s a matter of when,” they said. “Don&#39;t take the risk of having a collision or losing your licence.”

Station lock down ROSEBUD police station was put into lock down, Wednesday 19 September, when a man in a “highly aggressive” state threatened and taunted police from the reception area, 7.25pm. After a confrontation the man, of no fixed address, was arrested, lodged in the cells, and assessed for drugs. He was then taken to hospital for a psychiatric evaluation. Charges are pending.

Monkey bike seized SOMERVILLE Highway Patrol members and Frankston Council staff worked together last week to nab the rider of a monkey bike seen riding in the Seaford Wetlands. The riders are unwelcome because they cause damage to the wetlands and equipment, with a ranger onsite at the time repairing 13 locks suspected to have been broken by the riders. Police monitoring the Seaford North Primary School speed zone in

nearby Airlie Grove, saw a monkey bike coming from the wetlands which failed to stop for them as directed, Thursday 20 September. They and the council officer followed the rider to a nearby house and found the bike hidden in a garage with the engine still warm. It was towed away and will be crushed if the $800 release fee is not paid. Parents picking up their children, and the school principal, were reportedly pleased with the police’s efforts. However, the rider’s mother was said to be

less pleased with her son and his mates.

Bike’s paper plates SOMERVILLE Highway Patrol members in an unmarked car surprised the rider of an unregistered motorbike with false paper plates on Karingal Drive, Frankston, Thursday 20 September. The 42-year-old man, of Frankston, was found to be unlicensed and later tested positive to both methamphetamine and cannabis. The bike was impounded and the

FIVE residents of a house in Frankston were awoken by a smoke alarm as flames from an outdoor fire pit spread to the rear bedrooms, 5.30am, Sunday 23 September. Frankston CFA crews put out the fire which started on the rear deck of the house in McMahons Road. Those at home included the mother, 46, and children aged 12-16.

Man under guard A MAN was under guard at Frankston Hospital last week after being bitten by a police dog, 1.50pm, Thursday 20 September. The 27-year-old, of no fixed address, was arrested when police cordoned off an area near the corner of Jacana and Leonard streets, Frankston, in a two-and-a-half hour hunt for an alleged house breaker. He had not been charged last week.

Fumes blamed for man’s death POISONOUS fumes from an LPG heater are being blamed for the deaths of a man and his pets asleep in a campervan at Rye last week. The man, 57, was living in the van behind a friend’s house in Sydney Street with his kelpie dog and pet bird. The friend told police he had spoken to the man about the need for proper ventilation if he was using the heater in the days leading up to his death. However, all were found dead when he checked on them, 10.30am, Monday 24 September. Leading Senior Constable Brendan Richardson, of

Dromana police, said inadequate ventilation appeared to be a factor in the tragedy and the man’s death was not being treated as suspicious. “The witness was unable to raise them and called police,” he said. “Rye CFA attended to disperse the fumes and make the scene safe for the police and ambulance and the man’s body was taken to the coroner’s office.” Police say gas heaters should be checked regularly and oxygen depletion sensors used to warn of dangers from fumes.