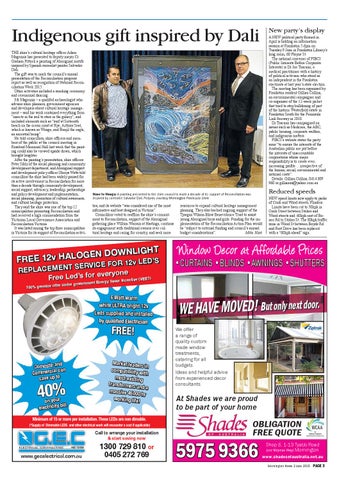 Indigenous gift inspired by Dali THE shireâ&#x20AC;&#x2122;s cultural heritage officer Adam Magennis has presented to deputy mayor Cr Graham Pittock a painting of Aboriginal motifs inspired by Spanish surrealist painter Salvador Dali. The gift was to mark the councilâ&#x20AC;&#x2122;s annual presentation of the Reconciliation progress report as well as recognition of National Reconciliation Week 2015. Other activities included a smoking ceremony and ceremonial dancing. Mr Magennis â&#x20AC;&#x201C; a qualifed archaeologist who advises shire planners, government agencies and developers about cultural heritage management â&#x20AC;&#x201C; said his work contained everything from â&#x20AC;&#x153;insects in the soil to stars in the galaxyâ&#x20AC;?, and included elements such as â&#x20AC;&#x153;surf at Sixteenth beach on the ocean coast at Rye; Arthurs Seat, which is known as Wonga; and Bunjil the eagle, an ancestral beingâ&#x20AC;?. He told councillors, shire officers and members of the public at the council meeting in Rosebud Memorial Hall last week that the painting could also be viewed upside down, which brought laughter. After the paintingâ&#x20AC;&#x2122;s presentation, shire officers Peter Sibly of the social planning and community development department, and Aboriginal support and development policy officer Glenys Watts told councillors the shire had been widely praised for its active involvement in Reconciliation for more than a decade through community development, social support, advocacy, leadership, partnerships and policy development and implementation, social planning, promotion of cultural awareness, and cultural heritage protection. They said the shire was one of the top 12 municipalities promoting Reconciliation and had received a high commendation from the Victorian Local Governance Association and Reconciliation Victoria. It was listed among the top three municipalities in Victoria for its support of Reconciliation activi-

A NEW political party formed in April is holding an information session at Frankston 5-6pm on Tuesday 9 June in Frankston Libraryâ&#x20AC;&#x2122;s long room, 60 Playne St. The national convener of PIBCI (Public Interests Before Corporate Interests) is Dr Joe Toscano, a medical practitioner with a history of political activism who stood as an independent in the Frankston electorate at last yearâ&#x20AC;&#x2122;s state election. The meeting has been organised by Frankston resident Gillian Collins, an environmental campaigner and co-organiser of the 12-week picket that tried to stop bulldozing of part of the historic Westerfield estate in Frankston South for the Peninsula Link freeway in 2010. Dr Toscano has campaigned on issues such as Medicare, the ABC, public housing, corporate welfare, and indigenous matters. PIBCIâ&#x20AC;&#x2122;s website states the party aims â&#x20AC;&#x153;to ensure the interests of the Australian public are put before the interests of unaccountable corporations whose major responsibility is to create everincreasing profits ... irrespective of the human, social, environmental and national costsâ&#x20AC;?. Details: Gillian Collins, 0414 309 960 or gillianuu@yahoo.com.au

Wave to Wonga: A painting presented to the shire council to mark a decade of its support of Reconciliation was inspired by surrealist Salvador Dali. Pictures courtesy Mornington Peninsula Shire

ties, and its website â&#x20AC;&#x153;was considered one of the most informative and best designed in Victoriaâ&#x20AC;?. Councillors voted to reaffirm the shireâ&#x20AC;&#x2122;s commitment to Reconciliation, support of the Aboriginal gathering place Willum Warrain at Hastings, continue its engagement with traditional owners over cultural heritage and caring for country, and seek more

NEW speed limits now apply to parks of Cook and Wood streets, Flinders. Limits have been cut to 50kph in Cook Street between Stokes and Wood streets and 60kph east of Boneo Rd to Stokes St. The 80kph buffer zone in Wood St between Boyds Rd and Rest Drive has been replaced with a â&#x20AC;&#x153;60kph aheadâ&#x20AC;? sign.

-9,, Market leade rs in compatibility with most existing transformers and a massive 4500 0 hr working life!

t c and Domesti l can Commercia save up to

on your ill. electricity b

WE HAVE MOVED! But only next door. We offer a range of quality custom made window treatments, catering for all budgets. Ideas and helpful advice from experienced decor consultants.