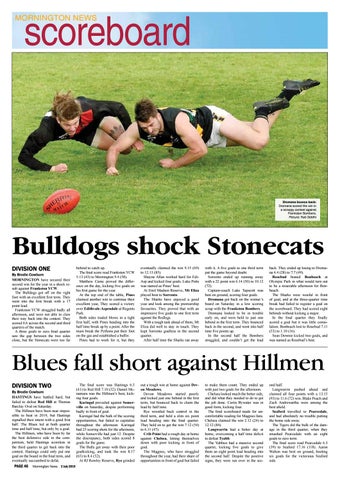 By Brodie Cowburn MORNINGTON have secured their second win for the year in a shock result against Frankston YCW. The Bulldogs got off on the right foot with an excellent first term. They went into the first break with a 17 point lead. Frankston YCW struggled badly all afternoon, and were not able to claw their way back into the contest. They scored 0.6 across the second and third quarters of the match. A three goals to zero final quarter saw the gap between the two sides close, but the Stonecats were too far

behind to catch up. The final score read Frankston YCW 5.13 (43) to Mornington 9.4 (58). Matthew Caine proved the difference on the day, kicking five goals on his first game for the year. At the top end of the table, Pines claimed another win to continue their excellent year, They scored a victory over Edithvale-Aspendale at Regents Park. Both sides traded blows in a tight first half, with Pines heading into the half time break up by a point. After the main break the Pythons put their foot on the gas and established a buffer. Pines had to work for it, but they

eventually claimed the win 9.15 (69) to 12.13 (85). Shayne Allan worked hard for EdiAsp and kicked four goals. Luke Potts was named as Pines’ best. At Emil Madsen Reserve, Mt Eliza played host to Sorrento. The Sharks have enjoyed a good year and look among the premiership favourites. They proved that with an impressive five goals to one first term against the Redlegs. With a tough task ahead of them, Mt Eliza did well to stay in touch. They kept Sorrento goalless in the second quarter. After half time the Sharks ran away

with it. A five goals to one third term put the game beyond doubt. Sorrento ended up running away with a 22 point win 6.14 (50) to 10.12 (72). Captain-coach Luke Tapscott was best on ground, scoring four goals. Dromana got back on the winner’s board on Saturday in a low scoring scrap with the Frankston Bombers. Dromana looked to be in trouble early on, and were held to just one behind in the first term. They bounced back in the second, and went into half time five points up. In the second half the Bombers struggled, and couldn’t get the lead

back. They ended up losing to Dromana 4.4 (28) to 7.7 (49). Rosebud hosted Bonbeach at Olympic Park in what would turn out to be a miserable afternoon for Bonbeach. The Sharks were woeful in front of goal, and at the three-quarter time break had failed to register a goal on the scoreboard. They had scored eight behinds without kicking a major. In the final quarter they finally scored a goal but it was little consolation. Bonbeach lost to Rosebud 7.11 (53) to 1.10 (16). Sean Downie kicked two goals, and was named as Rosebud’s best.

By Brodie Cowburn HASTINGS have battled hard, but failed to defeat Red Hill at Thomas Barclay Oval on Saturday. The Hillmen have been near impossible to beat in 2019, but Hastings signalled their intent with a good first half. The Blues led at both quarter time and half time, but only by a goal. The Hillmen, who have been by far the best defensive side in the competition, held Hastings scoreless in the third quarter to get back into the contest. Hastings could only put one goal on the board in the final term, and eventually succumbed to defat.

The final score was Hastings 6.5 (41) to Red Hill 7.10 (52). Daniel Mcnamara was the Hillmen’s best, kicking four goals. Karingal prevailed against Somerville on Saturday, despite performing badly in front of goal. Karingal had the bulk of the scoring opportunities, but failed to capitalise throughout the afternoon. Karingal had 25 scoring shots for the afternoon, while Somerville had just 12. Despite the discrepancy, both sides scored 8 goals for the game. The Bulls got away with their poor goalkicking, and took the win 8.17 (65) to 8.4 (52). At RJ Rowley Reserve, Rye grinded

out a tough win at home against Devon Meadows. Devon Meadows started poorly and kicked just one behind in the first term, but bounced back to claim the lead by half time. Rye wrestled back control in the third term, and held a slim six point lead heading into the final quarter. They held on to get the win 7.12 (54) to 6.11 (47). Crib Point had a rough day at home against Chelsea, letting themselves down with poor kicking in front of goal. The Magpies, who have struggled throughout the year, had their share of opportunities in front of goal but failed

to make them count. They ended up with just two goals for the afternoon. Chelsea looked much the better side, and did what they needed to do to get the job done. Curtis Bywater was in good form, kicking four. The final scoreboard made for uncomfortable reading for Magpies fans. Chelsea claimed the win 2.12 (24) to 12.12 (84). Langwarrin had a better day at home, overcoming a half time deficit to defeat Tyabb. The Yabbies had a massive second quarter, kicking five goals to give them an eight point lead heading into the second half. Despite the positive signs, they were run over in the sec-

ond half. Langwarrin pushed ahead and claimed all four points with a 13.15 (93) to 11.6 (72) win. Blake Peach and Zach Andrewartha were among the best afield. Seaford travelled to Pearcedale, and had absolutely no trouble putting the home side away. The Tigers did the bulk of the damage in the third quarter, when they smashed Pearcedale with an eight goals to zero term. The final score read Pearcedale 6.3 (39) to Seaford 17.16 (118). Aaron Walton was best on ground, booting six goals for the victorious Seaford side.