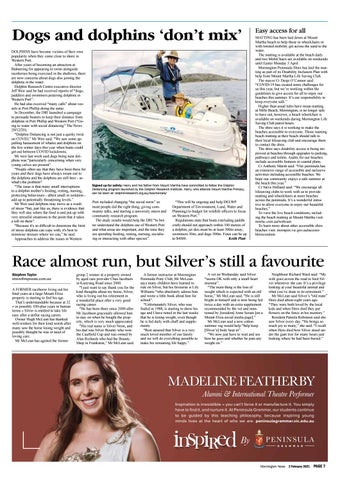 Dogs and dolphins ‘don’t mix’ DOLPHINS have become victims of their own popularity when they come close to shore in Western Port. After years of becoming an attraction at Balnarring for appearing to swim alongside racehorses being exercised in the shallows, there are now concerns about dogs also joining the dolphins in the water. Dolphin Research Centre executive director Jeff Weir said he had received reports of “dogs, paddlers and swimmers pestering dolphins in Western Port”. He had also received “many calls” about vessels in Port Phillip doing the same. In December, the DRI launched a campaign to persuade boaters to keep their distance from dolphins in Port Phillip and Western Port (“Going to water with social distancing” The News 20/12/20). “Dolphin Distancing is not just a quirky twist on COVID,” Mr Weir said. “We saw some appalling harassment of whales and dolphins on the few winter days this year when boats could get out between COVID lockdowns. Mr weir last week said dogs being near dolphins was “particularly concerning when very young calves are present”. “People often say that they have been there for years and their dogs have always swum out to the dolphins and the dolphins are still here - so what&#39;s the problem? “The issue is that many small interruptions to a dolphin mother&#39;s feeding, resting, nursing, protecting behaviours - albeit small in isolation add up to potentially threatening levels.” Mr Weir said dolphins may move as a result of stress “but, just like us, there is evidence that they will stay where the food is and put up with very stressful situations to the point that it takes a toll on them”. “Because it&#39;s so difficult to determine the limit of stress dolphins can cope with, it&#39;s best to minimise stresses where we can,” he said. Approaches to address the issues in Western

Signed up for safety: Harry and his father from Mount Martha have committed to follow the Dolphin Distancing program launched by the Dolphin Research Institute. Harry, who attends Mount Martha Primary, can be seen at: dolphinresearch.org.au/isiccheroes/

Port included changing “the social norm” so most people did the right thing; giving community talks; and starting a university intern and community research program. The study results would help the DRI “to better understand the dolphins use of Western Port and what areas are important, and the time they are spending feeding, resting, nursing, socialising or interacting with other species”.

“This will be ongoing and help DELWP Department of Environment, Land, Water and Planning) to budget for wildlife officers to focus on Western Port.” Regulations state that boats (including paddle craft) should not approach within 100 metres of a dolphin; jet skis must be at least 300m away; swimmers 30m; and dogs 300m. Fines can be up to $4000. Keith Platt

Easy access for all MATTING has been laid down at Mount Martha beach to help those in wheelchairs or with limited mobility get across the sand to the water. The matting is available at the beach daily and two MobiChairs are available on weekends until Easter Monday 5 April. Mornington Peninsula Shire has laid the matting as part of its Disability Inclusion Plan with help from Mount Martha Life Saving Club. The mayor Cr Despi O’Connor said: “COVID-19 has created some challenges for us this year, but we’re working within the guidelines to give access for all to enjoy our beaches this summer. It’s our responsibility to keep everyone safe.” Higher than usual tides have mean matting at Mills Beach, Mornington, is no longer safe to have out, however, a beach wheelchair is available on weekends during Mornington Life Saving Club patrol hours. The shire says it is working to make the beaches accessible to everyone. Those wanting beach matting at their beach should talk to their local lifesaving club and encourage them to contact the shire. The shire says disability access is being improved at beaches through upgrades to parking, pathways and toilets. Audits for our beaches include accessible features in coastal plans. Cr Anthony Marsh said: “Our peninsula has an extensive range of accessible and inclusive activities including accessible beaches. We hope our community enjoys a safe summer at the beach this year.” Cr Steve Holland said: “We encourage all lifesaving clubs to work with us to provide matting and wheelchairs at more beaches across the peninsula. It’s a wonderful initiative to allow everyone to enjoy our beautiful beaches.” To view the live beach conditions, including the beach matting at Mount Martha visit: mmlsc.com.au/webcam To learn more about other accessible shire beaches visit: mornpen.vic.gov.au/accessiblerecreation

Race almost run, but Silver’s still a favourite Stephen Taylor steve@mpnews.com.au A FORMER racehorse living out his final years at a large Mount Eliza property is starting to feel his age. That’s understandable because at 32 – or possibly 100-plus years in human terms – Silver is entitled to take life easy after a stellar racing career. Owner Hugh McLean has thanked well-wishers for their kind words after many saw the horse losing weight and possibly thought he was in need of loving care. Mr McLean has agisted the former

group 2 winner at a property owned by aged care provider Chas Jacobsen in Kunyung Road since 2000. “I just want to say thank you for the kind thoughts about my horse, Silver, who is living out his retirement in a wonderful place after a very good racing career. “He has been there since 2000 after Mr Jacobson graciously allowed him to stay on when he bought the property, which is very much appreciated. “His real name is Silver Neon, and his dad was Silver Bounty who won the Caulfield Cup and was owned by Alan Richards who had the Bounty Shop in Frankston,” Mr McLean said.

A former instructor at Mornington Peninsula Pony Club, Mr McLean says many children have learned to ride on Silver, but his favourite is Lily Williams “who absolutely adores him and wrote a little book about him for school”. “Unfortunately Silver, who was foaled in 1988, is starting to show his age and I have noted in the last weeks that he is losing weight, even though he is fed daily with chaff and supplements. “Rest assured that Silver is a very much loved member of our family and we will do everything possible to make his remaining life happy.”

A vet on Wednesday said Silver “seems OK with only a small heart murmur”. “The main thing is the loss of weight which is expected with an old horse,” Mr McLean said. “He is still bright in himself and is now being fed twice a day with an extra supplement recommended by the vet and mentioned by [resident] Anne Serato [on a Mount Eliza social media page].” Mr McLean said a new cotton summer rug would help “help keep [Sliver’s] body heat in”. “We now just have to wait and see how he goes and whether he puts any weight on.”

Neighbour Richard Ward said: “My wife goes across the road to feed Silver whenever she can. It’s a privilege looking at your beautiful animal and what you’ve done in its retirement.” Mr McLean said Silver’s “old mate” Hero died about eight years ago. “They were both loved by the local kids and when Hero died they put flowers on the fence in his memory.” Resident Pamela Robinson said she saw Silver every day. “He brings so much joy to many,” she said. “I recall when Hero died how Silver stood under the gum tree for many hours just looking where he had been buried.”

Inspiration is irresistible – you can’t force it or manufacture it. You simply have to find it, and nurture it. At Peninsula Grammar, our students continue to be guided by this teaching philosophy, because inspiring young minds lives at the heart of who we are. peninsulagrammar.vic.edu.au