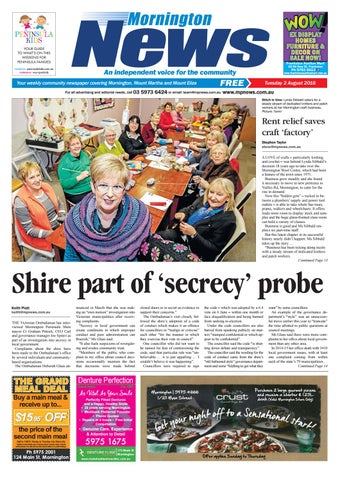 Rent relief saves craft ‘factory’ Stephen Taylor steve@mpnews.com.au A LOVE of crafts – particularly knitting and crochet – was behind Lynda Sibbald’s decision 18 years ago to take over the Mornington Wool Centre, which had been a feature of the town since 1971. Business grew steadily and she found it necessary to move to new premises in Yuilles Rd, Mornington, to cater for the rise in demand. Now this “hidden gem” – tucked in between a plumbers’ supply and power tool outlets – is able to take whole bus tours, prams, walkers and wheelchairs. It offers loads more room to display stock and samples and the huge glass-fronted class room can hold a variety of classes. Business is good and Ms Sibbald employs six part-time staff. But this latest chapter in its successful history nearly didn’t happen: Ms Sibbald takes up the story … “Business has been ticking along nicely with a steady stream of dedicated knitters and patch workers. Continued Page 13

Shire part of ‘secrecy’ probe Keith Platt keith@mpnews.com.au THE Victorian Ombudsman has interviewed Mornington Peninsula Shire mayor Cr Graham Pittock, CEO Carl and governance manager Joe Spiteri as part of an investigation into secrecy in local government. Complaints about the shire have been made to the Ombudsman’s office by several individuals and communitybased organisations. The Ombudsman Deborah Glass an-

nounced in March that she was making an “own motion” investigation into Victorian municipalities after receiving complaints. “Secrecy in local government can create conditions in which improper conduct and poor administration can flourish,” Ms Glass said. “It also fuels suspicions of wrongdoing and erodes community trust. “Members of the public who complain to my office about council decisions occasionally mention the fact that decisions were made behind

closed doors or in secret as evidence to support their concerns.” The Ombudsman’s visit closely followed the shire’s adoption of a code of conduct which makes it an offence for councillors to “malign or criticise” each other “for the manner in which they exercise their vote in council”. One councillor who did not want to be named for fear of contravening the code, said that particular rule was “unbelievable … it is just appalling … I couldn’t believe it was happening”. Councillors were required to sign

the code – which was adopted by a 6:4 vote on 6 June – within one month or face disqualification and being banned from seeking re-election. Under the code councillors are also barred from speaking publicly on matters “stamped confidential or which appear to be confidential”. The councillor said the code “is shutting down debate and transparency”. The councillor said the wording for the code of conduct came from the shire’s “old fashioned style” governance department and some “fiddling to get what they

want” by some councillors. An example of the governance department’s “style” was an unsuccessful move earlier this year to “truncate” the time allotted to public questions at council meetings. Ms Glass said there were more complaints to her office about local government than any other area. In 2014-15 her office dealt with 3410 local government issues, with at least one complaint coming from within each of the state’s 79 municipalities. Continued Page 14

26 As Vital As Your Smile