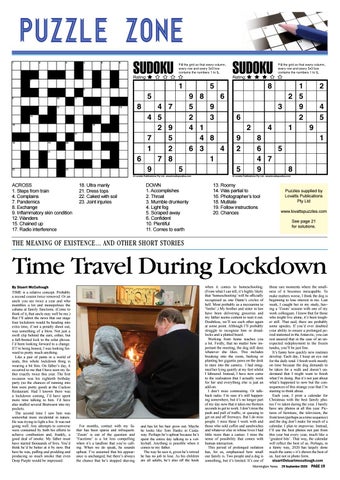 Time Travel During Lockdown By Stuart McCullough TIME is a relative concept. Probably a second cousin twice removed. Or an uncle you see twice a year and who mumbles a lot and monopolises the cabana at family functions. (Come to think of it, that uncle may well be me.) But I’ll admit the news that our stage four lockdown would be heading into extra time, if not a penalty shoot out, was something of a blow. Not just a swift clip behind the ears, either, but a full-booted kick to the solar plexus. I’d been looking forward to a change. If I’m being honest, I was looking forward to pretty much anything. Like a pair of pants in a world of seats, this whole lockdown thing is wearing a bit thin. On father’s day, it occurred to me that I have seen my father exactly twice this year. The first occasion was his eightieth birthday party (so the chances of running into him were pretty good) at the Cuckoo Restaurant. Had I known there was a lockdown coming, I’d have spent more time talking to him. I’d have also stuffed several Bratwurst into my pockets. The second time I saw him was somewhat more incidental in nature. He was trying to light a fire. It was not going well. Any attempts to converse were consumed by both his efforts to achieve combustion and, frankly, a good deal of smoke. My father must have started thousands of fires. You’d think he’d be better at it by now. But here he was, puffing and prodding and producing so much smoke that even Deep Purple would be impressed.

For months, contact with my father has been sparse and infrequent. ‘Zoom’ is out of the question and ‘Facetime’ is a lot less compelling when it’s a landline that you’re calling. When we do speak, he sounds upbeat. I’ve assumed that his appearance is unchanged, but there’s always the chance that he’s stopped shaving

and has let his hair grow out. Maybe he looks like Tom Hanks in Castaway. Perhaps he’s upbeat because he’s spent the entire day talking to a volleyball. Anything is possible when it comes to my father. The way he sees it, given he’s retired he has no job to lose. As his children are all adults, he’s also off the hook

when it comes to homeschooling. (From what I can tell, it’s highly likely that ‘homeschooling’ will be officially recognised as one Dante’s circles of hell. Most probably as a mezzanine to ‘limbo’.) My brother and sister in law have been delivering groceries and my father seems content to wait it out. Doubtless, we’ll see each other again at some point. Although I’ll probably struggle to recognise him in dreadlocks and a platted beard. Working from home teaches you a lot. Firstly, that no matter how important the meeting, the dog still does whatever she likes. This includes breaking into the room, barking or planting her gigantic paws on the desk to stare into the camera. I had imagined her lying quietly at my feet whilst I laboured. Instead, I have now come to the realisation that I actually work for her and everything else is just an add-on. I don’t miss commuting. Or talkback radio. I’m sure it’s still happening somewhere, but it’s no longer part of my day now that it takes me thirteen seconds to get to work. I don’t miss the push and pull of traffic, or queuing to get on and off freeways. But I do miss people. I miss those I work with and those who sold coffee and sandwiches and whatever else in whose lives I had little more than a cameo. I miss the sense of possibility that comes with human interaction. This period of prolonged isolation has, for us, emphasised how small our family is. Two people and a dog is something, but it’s limited. It’s one of

those rare moments where the smallness of it becomes inescapable. To make matters worse, I think the dog is beginning to lose interest in me. Last week, I caught her in my study, having a ‘Zoom’ session with one of my work colleagues. I know that for those who might live alone, it’s been tougher still. That said, there are probably some upsides. If you’d ever doubted your ability to ensure a prolonged period stationed in the Antarctic, you can rest assured that in the case of an unexpected redeployment to the frozen tundra, you’ll be just fine. It’s funny how quickly new routines develop. Each day, I keep an eye out for the daily total. I finish work mostly on time because the dog demands to be taken for a walk and doesn’t understand that I might want to finish what I’m doing. But it’s not just about what’s happened to now but the consequences of this strange year that I’m starting to think about. Each year, I print a calendar for Christmas with the best family photos I’ve taken during the year. I barely have any photos at all this year. Pictures of furniture, the television, the front lawn (perhaps as a time sequence) and the dog don’t make for much of a calendar. I plan to improvise. Instead, I’ll use the best photos not just from this year but every year, much like a ‘greatest hits’. That way, the calendar will reflect the best of us. Perhaps, in a funny way, 2020 has largely done much the same – it’s shown the best of us. Just not in photo form. stuart@stuartmccullough.com