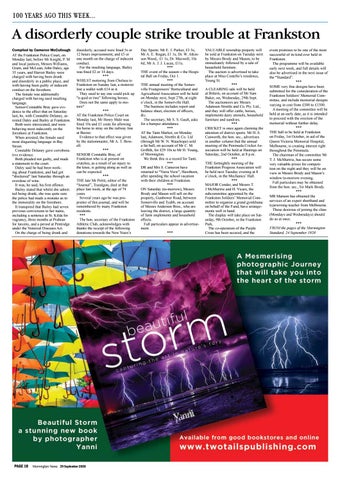 A disorderly couple strike trouble at Frankston Compiled by Cameron McCullough AT the Frankston Police Court, on Monday last, before Mr Knight, P. M and local justices, Messrs Williams, Grant, and McLean, John Daley, age 35 years, and Harriet Bailey were charged with having been drunk and disorderly in a public place, and with having been guilty of indecent conduct on the foreshore. The female was additionally charged with having used insulting language. Senior-Constable Bray gave evidence to the effect that on Saturday last, he, with Constable Delaney, arrested Daley and Bailey at Frankston. Both were intoxicated, and were behaving most indecently on the foreshore at Frankston. When arrested, the female used most disgusting language in Bay Street. Constable Delaney gave corroborative evidence. Both pleaded not guilty, and made a statement to the court. Daley said he had been working about Frankston, and had got “shickered” last Saturday through an overdose of wine. It was, he said, his first offence. Bailey stated that whilst she admitted being drunk, she was quite sure the police had made a mistake as to the immorality on the foreshore. It transpired that Bailey had seven previous convictions to her name, including a sentence at St. Kilda for vagrancy, three months at Prahran for larceny, and a period at Pentridge under the Venereal Diseases Act. On the charge of being drunk and

disorderly, accused were fined 5s or 12 hours imprisonment, and £5 or one month on the charge of indecent conduct. For the insulting language, Bailey was fined £2 or 14 days. *** WHILST motoring from Chelsea to Frankston on Sunday last, a motorist lost a wallet with £14 in it. They used to say one could pick up “a quid or two” following horses. Does not the same apply to motors? *** AT the Frankston Police Court on Monday last, Mr Henry Male was fined 10s and £1 costs for allowing his horse to stray on the railway line at Baxter. Evidence to that effect was given by the stationmaster, Mr A. T. Bowell. *** SENIOR Constable Bray, of Frankston who is at present on crutches, as a result of an injury to the knee, is getting along as well as can be expected. *** THE late Mr Pettit, editor of the “Journal”, Traralgon, died at that place last week, at the age of 74 years. Several years ago he was proprietor of this journal, and will be remembered by many Frankston residents. *** The hon. secretary of the Frankston Athletic Club, acknowledges with thanks the receipt of the following donations towards the New Years’s

Day Sports: Mr E. J. Parker, £3 3s; Mr A. E. Rogan, £1 1s; Dr. W. Atkinson Wood,: £1 1s; Dr. Maxwell, 10s 6d; Mr A. J. J. Lucas, £11s. *** THE event of the season – the Hospital Ball on Friday, Oct 1. *** THE annual meeting of the Somerville Fruitgrowers’ Horticultural and Agricultural Association will be held on Monday next, Sept 27th, at eight o’clock, in the Somerville Hall. The business includes report and balance sheet, election of officers, &c. The secretary, Mr S. S. Gault, asks for a bumper attendance. *** AT the Tanti Market, on Monday last, Adamson, Strettle & Co. Ltd (through Mr W. N. Wauchope) sold a fat bull, on account of Mr C. M. Griffith, for £29 10s to Mr H. Young, of Mornington. We think this is a record for Tanti. *** DR and Mrs S. Cameron have returned to “Yarra View”, Hawthorn, after spending the school vacation with their children at Frankston. *** ON Saturday (to-morrow), Messrs Brody and Mason will sell on the property, Gunbower Road, between Somerville and Tyabb, on account of Messrs Anderson Bros., who are leaving the district, a large quantity of farm implements and household effects. Full particulars appear in advertisement. ***

VALUABLE township property will be sold at Frankston on Tuesday next by Messrs Brody and Mason, to be immediately followed by a sale of household furniture. The auction is advertised to take place at Miss Costello’s residence, Young St. *** A CLEARING sale will be held at Bittern, on account of Mr Sam Baker, on, Wednesday, 29th Sept. The auctioneers are Messrs Adamson Strettle and Co. Pty. Ltd., and they will offer cattle, horses, implements dairy utensils, household furniture and sundries. *** CRICKET is once again claiming the attention of district sports. Mr H..S. Cusworth, the hon. sec., advertises in another column that the annual meeting of the Peninsula Cricket Association will be held at Hastings on Saturday, 2nd October, at 8 p.m. *** THE fortnightly meeting of the Frankston Progress Association will be held next Tuesday evening at 8 o’clock, in the Mechanics’ Hall. *** MAJOR Conder, and Messrs T. J McMurtrie and H. Vicars, the subcommittee appointed by the Frankston Soldiers’ Memorial Committee to organise a grand gymkhana on behalf of the Fund, have arrangements well in hand. The display will take place on Saturday, 9th October, in the Frankston Park. The co-operation of the Purple Cross has been secured, and the

event promises to be one of the most successful of its kind ever held in Frankston. The programme will be available early next week, and full details will also be advertised in the next issue of the “Standard”. *** SOME very fine designs have been submitted for the consideration of the Frankston Soldiers’ Memorial Committee, and include memorial designs varying in cost from £500 to £1500. A meeting of the committee will be held at an early date, as it is intended to proceed with the erection of the memorial without further delay. *** THE ball to be held at Frankston on Friday, 1st October, in aid of the Queen Victoria Memorial Hospital, Melbourne, is creating interest right throughout the Peninsula. The chairman of the committee Mr T. J. McMurtrie, has secure some very valuable prizes for competition on the night and they will be on view in Messrs Brody and Mason’s window to-morrow evening. Full particulars may be obtained from the hon. sec., Sir Mark Brody. *** MR Manson has obtained the services of an expert shorthand and typewriting teacher from Melbourne. Those desirous of joining the class (Mondays and Wednesdays) should do so at once. *** FROM the pages of the Mornington Standard, 24 September 1920