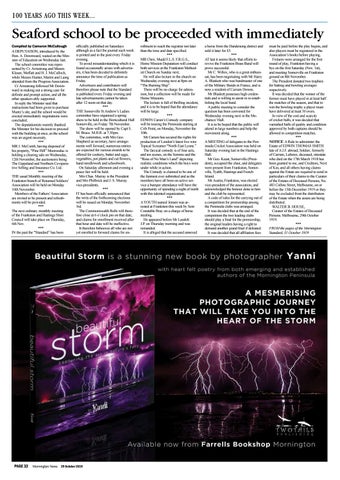 Seaford school to be proceeded with immediately Compiled by Cameron McCullough A DEPUTATION, introduced by the Hon. A. Downward, waited on the Minister of Education on Wednesday last. The school committee was represented by Cr. Armstrong and Messrs Klauer, Moffatt and H. J. McCulloch, while Messrs Hunter, Martin and Laing attended from the Progress Association. Cr Armstrong followed Mr Downward in making out a strong case for definite and prompt action, and all the other speakers ably supported. In reply the Minister said that instructions had been given to purchase Muntz’s site, and the school would be erected immediately negotiations were concluded. The deputationists warmly thanked the Minister for his decision to proceed with the building at once, as the school was an urgent necessity. *** MR J. McComb, having disposed of his property, “Pine Hill” Moorooduc is holding a clearing sale on Wednesday, 12th November, the auctioneers being The Gippsland and Northern Co-operative Selling and Insurance Co. Ltd. *** THE usual Monthly meeting of the Frankston branch of Returned Soldiers’ Association will be held on Monday 10th November. Members of the Fathers’ Association are invited to be present and refreshments will be provided. *** The next ordinary monthly meeting of the Frankston and Hastings Shire Council will take place on Thursday, 6th Nov. *** IN the past the “Standard” has been

officially published on Saturdays although as a fact the journal each week is printed and in the post every Friday evening. To avoid misunderstanding which it is found occasionally arises with advertisers, it has been decided to definitely announce the time of publication as Friday. Advertisers and contributors will therefore please note that the Standard is published every Friday evening and late advertisements cannot be taken after 12 noon on that day. *** THE Somerville St Andrew’s Ladies committee have organised a spring show to be held in the Horticultural Hall Somerville, on Friday 7th November. The show will be opened by Capt S. M. Bruce. M.H.R. at 7.30pm. The committee, with Mrs Geo. Shepherd as secretary, have arrangements well forward, numerous entries are expected for various awards to be offered for cookery, butter and eggs, vegetables, pot plants and cut flowers, hand needlework and schoolwork. On Saturday afternoon and evening a peace fair will be held. Mrs Chas. Murray is the President and Mrs Philbrick and J. S. Murray vice-presidents. *** IT has been officially announced that the writs of the forthcoming elections will be issued on Monday November 3rd. The Commonwealth Rolls will therefore close at 6 o’clock pm on that date, and claims for enrollment received after that hour and date will be ineffective. It therefore behooves all who are not yet enrolled to forward claims for en-

rollment to reach the registrar not later than the time and date specified. *** MR Chris. Mudd F.L.S. F.R.G.S., Home Mission Deputation will conduct both services at the Frankston Methodist Church on Sunday next. He will also lecture in the church on Wednesday evening next at 8pm on “The Burning Ship”. There will be no charge for admission, but a collection will be made for Home Missions. The lecture is full of thrilling incident, and it is to be hoped that the attendance will be large. *** EDWIN Carsin’s Comedy company will be touring the Peninsula starting at Crib Point, on Monday, November the 10th. Mr Carson has secured the rights for production of London’s latest live wire Topical Screamer “North East Lynne.” The farcical comedy is of four acts, and ten scenes, on the Somme and the “Rose of No Man’s Land” depicting realistic conditions which the boys were under while in action. The Comedy is claimed to be one of the funniest ever submitted and as the members have all been on active service a bumper attendance will have the opportunity of spending a night of mirth with this talented organization. *** A YOUTH named Jensen was arrested at Frankston this week by Senr Constable Bray on a charge of horse stealing. He appeared before Mr Lasslett J.P. on Thursday morning and was remanded. It is alleged that the accused annexed

a horse from the Dandenong district and sold it later for £5. *** AT last it seems likely that efforts to revive the Frankston Brass Band will prove successful. Mr C. Willox, who is a great enthusiast, has been negotiating with Mr Harry A. Blaskett who was bandmaster of one of the Military Bands in France, and is now a resident of Carrum Downs. Mr Blaskett possesses high credentials and is willing to assist in re-establishing the local band. A public meeting to consider the question has been convened for Wednesday evening next in the Mechanics’ Hall. It is to be hoped that the public will attend in large numbers and help the movement along. *** A MEETING of delegates to the Peninsula Cricket Association was held on Saturday evening last in the Hastings Hall. Mr Geo. Keast, Somerville (President), occupied the chair, and delegates were present from Frankston, Somerville, Tyabb, Hastings and French Island. Mr Austin, Frankston, was elected vice-president of the association, and acknowledged the honour done to him and the club be represented. A code of rules for the carrying out of a competition for premiership among the Peninsula clubs was arranged. It was decided that at the end of the competition the two leading clubs should play a final for the premiership, the original leaders having a right to demand another grand final if defeated. It was decided that all affiliation fees

must be paid before the play begins, and also players must be registered in the Association’s books before playing. Fixtures were arranged for the first round of play, Frankston having a bye on the first Saturday (Nov. 1st), and meeting Somerville on Frankston ground on 8th November. The President donated two trophies for batting and bowling averages respectively. It was decided that the winner of the former must have played in at least half the matches of the season, and that to win the bowling trophy a player must have delivered at least 50 overs. In view of the cost and scarcity of cricket balls, it was decided that varnished balls of quality and condition approved by both captains should be allowed in competition matches. *** NOTICE. A Rule to administer the Estate of EDWIN THOMAS SMITH late of A.I.F. abroad, Soldier; formerly of Carrum, Laborer, deceased, intestate who died on the 17th March 1918 has been granted to me, and Creditors, Next of Kin, and all others having claims against the Estate are required to send in particulars of their claims to the Curator of the Estates of Deceased Persons, No. 483 Collins Street, Melbourne, on or before the 15th December 1919 or they may be excluded front the distribution of the Estate when the assets are being distributed. WALTER B. HOUSE, Curator of the Estates of Deceased Persons. Melbourne, 29th October 1919. *** FROM the pages of the Mornington Standard, 31 October 1919