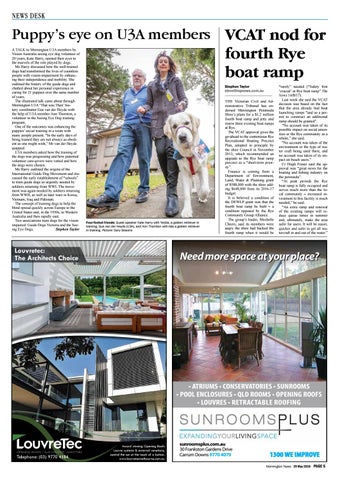 Puppy’s eye on U3A members VCAT nod for A TALK to Mornington U3A members by Vision Australia seeing eye dog volunteer of 20 years, Kate Harry, opened their eyes to the marvels of the role played by dogs. Ms Harry discussed how the well-trained dogs had transformed the lives of countless people with vision-impairment by enhancing their independence and mobility. She outlined the history of the guide dogs and chatted about her personal experience in caring for 21 puppies over the same number of years. The illustrated talk came about through Mornington U3A ‘That was Then’ history coordinator Gus van der Heyde with the help of U3A member Ann Thornton, a volunteer in the Seeing Eye Dog training program. One of the outcomes was enhancing the puppies’ social training in a room with many people present. “In the early days of being trained they are not always as obedient as one might wish,” Mr van der Heyde quipped. U3A members asked how the training of the dogs was progressing and how potential volunteer care-givers were vetted and how the dogs were chosen. Ms Harry outlined the origins of the International Guide Dog Movement and discussed the early establishment of “schools” to train guide dogs so urgently needed by soldiers returning from WWI. The movement was again needed by soldiers returning from WWII, as well as later wars in Korea, Vietnam, Iraq and Pakistan. The concept of training dogs to help the blind spread quickly across Europe to the United States and, in the 1950s, to Western Australia and then rapidly east. Two associations train dogs for the vision impaired: Guide Dogs Victoria and the Seeing Eye Dogs. Stephen Taylor

THE Victorian Civil and Administrative Tribunal has endorsed Mornington Peninsula Shire’s plans for a $1.2 million fourth boat ramp and jetty and renew three existing boat ramps at Rye. The VCAT approval gives the go-ahead to the contentious Rye Recreational Boating Precinct Plan, adopted in principle by the shire Council in November 2013, which recommended an upgrade to the Rye boat ramp precinct as a “short-term priority”. Finance is coming from a Department of Environment, Land, Water &amp; Planning grant of $588,000 with the shire adding $648,000 from its 2016-17 budget. It is believed a condition of the DEWLP grant was that the fourth boat ramp be built – a condition opposed by the Rye Community Group Alliance. The group’s leader, Mechelle Cheers, said its members were angry the shire had backed the fourth ramp when it would be

“rarely” needed (“Safety first ‘crucial’ at Rye boat ramp” The News 14/8/17). Last week she said the VCAT decision was based on the fact that the area already had boat launching ramps “and so a permit to construct an additional ramp should be granted”. “No account was taken of its possible impact on social amenities or the Rye community as a whole,” she said. “No account was taken of the environment or the type of water craft being used there, and no account was taken of its impact on beach users.” Cr Hugh Fraser said the approval was “great news for the boating and fishing industry on the peninsula”. “At peak periods the Rye boat ramp is fully occupied and serves much more than the local community – increased investment to this facility is much needed,” he said. “An extra ramp and renewal of the existing ramps will reduce queue times in summer and, ultimately, make the area safer for users. It will be easier, quicker and safer to get all watercraft in and out of the water.”