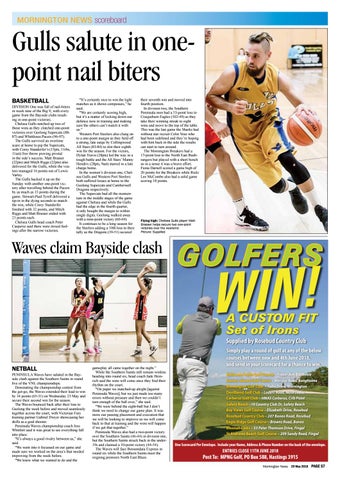 DIVISION One was full of nail-biters in week nine of the Big V, with every game from the Bayside clubs resulting in one-point victories. Chelsea Gulls notched up two of those wins as they clutched one-point victories over Geelong Supercats (8887) and Whittlesea Pacers (96-97). The Gulls survived an overtime scare at home to pip the Supercats, with Corey Standerfer’s (15pts, 11rbs, 11ast) free throw proving pivotal in the side’s success. Matt Brasser (22pts) and Mitch Riggs (22pts) also delivered for the Gulls, while the visitors managed 16 points out of Lewis Varley. The Gulls backed it up on the Sunday with another one-point victory after travelling behind the Pacers by as much as 15 points during the game. Stewart-Paul Tyrell delivered a tip‐in in the dying seconds to snatch the win, while Corey Standerfer finished with 32 points, and Mitch Riggs and Matt Brasser ended with 21 points each. Chelsea Gulls head coach Peter Caspersz said there were mixed feelings after the narrow victories.

“It’s certainly nice to win the tight matches as it shows composure,” he said. “We are certainly scoring high, but it’s a matter of locking down our defence now in training and making sure the others can’t match it with us.” Western Port Steelers also clung on to a one-point margin as they held off a strong, late surge by Collingwood All Stars (83-84) to slot their eighth win for the season. For the victors, Dylan Travis (28pts) led the way in a tough battle and the All Stars’ Manny Hendrix (28pts, 9ast) starred in a late charge home. In the women’s division one, Chelsea Gulls and Western Port Steelers both suffered losses at home to the Geelong Supercats and Camberwell Dragons respectively. The Supercats had all the momentum in the middle stages of the game against Chelsea and while the Gulls had the edge in the fourth quarter, it only bought the margin to within single digits. Geelong walked away with a nine-point victory (60-69). It continues to be a long season for the Steelers adding a 10th loss to their tally as the Dragons (39-51) secured

their seventh win and moved into fourth position. In division two, the Southern Peninsula men had a 53-point loss to Craigieburn Eagles (102-49) as they take their winning streak to eight wins and move to the top of the table. This was the last game the Sharks had without star recruit Colin Voss who had been sidelined and they’re hoping with him back in the side the results can start to turn around. The Mornington Breakers had a 17-point loss to the North East Bushrangers but played with a short bench so in a sense it was a brave effort. Fiona Darnell scored a game high of 20 points for the Breakers while Ricki Lee McCombe also had a solid game scoring 18 points.

PENINSULA Waves have saluted in the Bayside clash against the Southern Saints in round five of the VNL championships. Dominating the championship contest from the get-go, the Waves extended their lead to win by 34 points (65-31) on Wednesday 23 May and secure their second win for the season. The Waves bounced back after their loss to Geelong the week before and moved seamlessly together across the court, with Victorian Fury training partner Gabriel Dwyer showcasing her skills as a goal shooter. Peninsula Waves championship coach Jess Whitfort said it was great to see everything fall into place. “It’s always a good rivalry between us,” she said. “We went into it focussed on our game and made sure we worked on the area’s that needed improving from the week before. “We knew what we wanted to do and the

gameplay all came together on the night.” While the Southern Saints still remain winless heading into round six, head coach Jade Heinrich said the wins will come once they find their rhythm on the court. “On paper we matched-up alright [against Peninsula Waves], but we just made too many errors without pressure and then we couldn’t turn enough of the ball over,” she said. “We were behind the eight-ball but I don’t think we need to change our game plan. It was more our passing placement and execution that we will be looking to improve so we will come back to that at training and the wins will happen if we get that together.” Peninsula Waves also had a two-point victory over the Southern Saints (46-44) in division one, but the Southern Saints struck back in the under19s and claimed a 10-point victory (44-54). The Waves will face Boroondara Express in round six while the Southern Saints meet the reigning premiers North East Blaze.