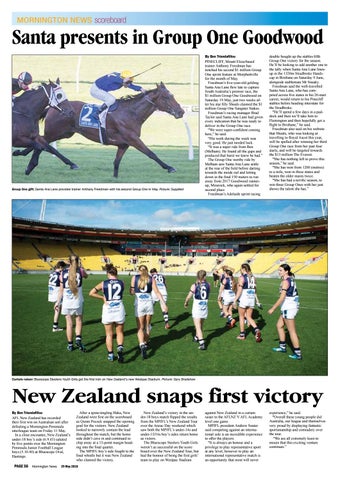 Santa presents in Group One Goodwood

Group One gift: Santa Ana Lane provides trainer Anthony Freedman with his second Group One in May. Picture: Supplied

By Ben Triandafillou PINECLIFF, Mount Eliza-based trainer Anthony Freedman has notched his second $1 million Group One sprint feature at Morphettville for the month of May. Freedman’s five-year-old gelding Santa Ana Lane flew late to capture South Australia’s premier race, the $1 million Group One Goodwood on Saturday 19 May, just two weeks after his star filly Shoals claimed the $1 million Group One Sangster Stakes. Freedman’s racing manager Brad Taylor said Santa Ana Lane had given every indication that he was ready to deliver in the Group One race. “We were super-confident coming here,” he said. “His work during the week was very good. He just needed luck. “It was a super ride from Ben (Melham). He found all the gaps and produced that burst we knew he had.” The Group One worthy ride by Melham saw Santa Ana Lane settle at the rear of the field before darting towards the inside rail and letting down in the final 150 meters to run away from 2017 Goodwood runnerup, Missrock, who again settled for second place. Freedman’s Adelaide sprint racing

double bought up the stables fifth Group One victory for the season. He’ll be looking to add another one to the tally when Santa Ana Lane linesup in the 1350m Stradbroke Handicap in Brisbane on Saturday 9 June, alongside stablemate Mr Sneaky. Freedman said the well-travelled Santa Ana Lane, who has competed across five states in his 26-start career, would return to his Pinecliff stables before heading interstate for the Stradbroke. “He’ll spend a few days in a paddock and then we’ll take him to Flemington and then hopefully get a flight to Brisbane,” he said. Freedman also said on his website that Shoals, who was looking at travelling to Royal Ascot this year, will be spelled after winning her third Group One race from her past four starts, and will be targeted towards the $13 million The Everest. “She has nothing left to prove this season,” he said. “She has won from 1200 (metres) to a mile, won in three states and beaten the older mares twice. “She has had a terrific season, to win three Group Ones with her just shows the talent she has.”

After a spine-tingling Haka, New Zealand were first on the scoreboard as Quinn Pocock snapped the opening goal for the visitors. New Zealand looked to narrowly contain the lead throughout the match, but the home side didn’t cave in and continued to chip away at a 15-point margin heading into the final quarter. The MPJFL boy’s side fought to the final whistle but it was New Zealand who claimed the victory.

New Zealand’s victory in the under-18 boys match flipped the results from the MPJFL’s New Zealand Tour over the Anzac Day weekend which saw both the MPJFL’s under-14s and under-15/16s boy’s sides return home as victors. The Bluescope Steelers Youth Girls weren’t as successful on the score board over the New Zealand Tour, but had the honour of being the first girls’ team to play on Westpac Stadium

against New Zealand in a curtain raiser to the AFLNZ V AFL Academy level one game. MPJFL president Andrew Souter said competing against an international side is an incredible experience to offer the players. “It is always an honour and a privilege to play representative sport at any level, however to play an international representative match is an opportunity that most will never

experience,” he said. “Overall these young people did Australia, our league and themselves very proud by displaying fantastic sportsmanship and comradery over the tour. “We are all extremely keen to ensure that this exciting venture continues.”