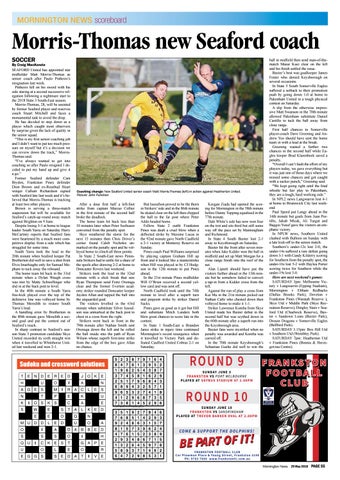 By Craig MacKenzie SEAFORD United has appointed star midfielder Matt Morris-Thomas as senior coach after Paulo Pinheiro’s resignation last week. Pinheiro fell on his sword with his side staring at a second successive relegation following a nightmare start to the 2018 State 3 South-East season. Morris-Thomas, 28, will be assisted by former Seaford player and reserves coach Stuart Mitchell and faces a monumental task to avoid the drop. He has decided to step down as a player which caught most observers by surprise given the lack of quality in the senior squad. “This is my first senior coaching job and I didn’t want to put too much pressure on myself but it’s a decision we can review down the track,” MorrisThomas said. “I’ve always wanted to get into coaching so after Paulo resigned I decided to put my hand up and give it a go.” Former Seaford defender Cam Bryden, Frankston Pines defender Dion Brown and ex-Rosebud Heart winger Callum Richardson signed with Seaford late last week and it’s believed that Morris-Thomas is tracking at least two other players. Brown is serving a three-match suspension but will be available for Seaford’s catch-up round away match against Brighton on 9 June. Despite losing 3-1 at home to league leader South Yarra on Saturday Harry McCartney reports that Seaford fans were heartened by a much more competitive display from a side which has struggled for some time. South Yarra took the lead in the 20th minute when Seaford keeper Pat Bretherton did well to save a shot from Elvis Imarhiagbe only for Samuel Mepham to tuck away the rebound. The home team hit back in the 33rd minute when a Dylan Waugh cross was met by Matty Schwellinger who slid in at the back post to level. In the 40th minute a South Yarra free-kick played over the top of the defensive line was volleyed home by Thomas Meredith to restore South Yarra’s lead. A handling error by Bretherton in the 80th minute gave Meredith a second goal and put the contest out of Seaford’s reach. In sharp contrast to Seaford’s season State 3 promotion candidate Skye United recorded its sixth straight win when it travelled to Whitehorse United last weekend and won 2-1.

After a dour first half a left-foot strike from captain Marcus Collier in the first minute of the second half broke the deadlock. The home team hit back less than 10 minutes later when Peter Seehusen converted from the penalty spot. Skye weathered the storm for the next 15 minutes then Chris Driver’s corner found Caleb Nicholes unmarked on the penalty spot and he volleyed home to clinch all three points. In State 2 South-East news Peninsula Strikers had to settle for a share of the spoils after drawing 2-2 at home to Doncaster Rovers last weekend. Strikers took the lead in the 32nd minute with a slick break that saw Ryan Thompson send Femi Orenuga clear and the former Everton academy striker rounded Doncaster keeper Jayden Allan and tapped the ball into the unguarded goal. The visitors levelled in the 63rd minute when substitute Silver Issoufson was unmarked at the back post to chest in a cross from the right. Strikers went back in front in the 79th minute after Nathan Smith sent Orenuga down the left and he rolled the ball inside into the path of Ryan Wilson whose superb first-time strike from the edge of the box gave Allan no chance.

But Issoufson proved to be the thorn in Strikers’ side and in the 86th minute he skated clear on the left then chipped the ball to the far post where Peter Addo headed home. Fellow State 2 outfit Frankston Pines was dealt a cruel blow when a deflected strike by Maxime Lucas in the 92nd minute gave North Caulfield a 2-1 victory at Monterey Reserve on Sunday. Pines coach Paul Williams surprised by playing captain Graham Hill up front and it looked like a masterstroke when Hill was played in by CJ Hodgson in the 12th minute to put Pines ahead. In the 21st minute Pines midfielder Will O’Brien received a second yellow card and was sent off. North Caulfield took until the 74th minute to level after a superb turn and pinpoint strike by striker Daniel Sacks. Pines gave as good as it got but Hill and substitute Mitch Landers both blew great chances to score late in the contest. In State 1 South-East a Brandon Jansz strike in injury time continued Mornington’s recent resurgence when it travelled to Victory Park and defeated Caulfied United Cobras 2-1 on Saturday.

Keegan Ziada had opened the scoring for Mornington in the 58th minute before Danny Topping equalised in the 77th minute. Dale White’s side has now won four on the trot and sits third but still some way off the pace set by Manningham and Richmond. In State 4 South Baxter lost 2-1 away to Keysborough on Saturday. Baxter hit the front after seven minutes when Jake Kidder won the ball in midfield and set up Matt Morgan for a close range finish into the roof of the net. Alan Lipsett should have put the visitors further ahead in the 15th minute but he somehow failed to convert a tap-in from a Kidder cross from the left. Against the run of play a cross from Kui Mu in the 21st minute picked out Nathan Calle who chested down then volleyed home to make it 1-1. Striker Lawrence Komba from Skye United made his Baxter debut in the second half but was scythed down in the 60th minute after a superb run into the Keysborough area. Baxter fans were mystified when no penalty was awarded and Komba was carried off. In the 70th minute Keysborough’s Sebastian Gueho did well to win the

ball in midfield then send man-of-thematch Masur Kuei clear on the left and his finish settled the issue. Baxter’s best was goalkeeper James Foster who denied Keysborough on several occasions. In State 5 South Somerville Eagles suffered a setback to their promotion push by going down 1-0 at home to Pakenham United in a tough physical contest on Saturday. A slip from the otherwise impressive Matt Swanson in the 70th minute allowed Pakenham substitute Daniel Castillo to tuck the ball away from close range. First half chances to Somerville player-coach Dave Greening and Andrew Yeo should have sent the home team in with a lead at the break. Greening wasted a further two chances in the second half while Eagles keeper Brad Klarenbeek saved a penalty. “Overall I can’t fault the effort of my players today, we gave everything but it was just one of those days where we missed some chances and got caught with a sucker punch,” Greening said. “We kept going right until the final whistle but fair play to Pakenham, they are a tough, hard working side.” In NPL2 news Langwarrin lost 4-1 at home to Brunswick City last weekend. Paul Speed put Langy ahead in the 14th minute but goals from Juan Portillo, Jakub Mlcak, Ali Turgut and Baggio Yusuf gave the visitors an emphatic victory. In NPLW news, Southern United clashed with Bulleen on Sunday with a late kick-off to the senior match. Southern’s under-12s lost 2-0, the under-14s suffered a rare defeat going down 3-1 with Candy Kilderry scoring for Southern from the penalty spot, the under-16s lost 5-2 with Haylea Porter scoring twice for Southern while the under-19s lost 5-0. Here are next weekend’s games: SATURDAY 3pm: Melbourne Victory v Langwarrin (Epping Stadium), Mornington v Eltham Redbacks (Dallas Brooks Park), Doveton v Frankston Pines (Waratah Reserve ), Skye Utd v Middle Park (Skye Recreation Reserve), Dingley Stars v Seaford Utd (Chadwick Reserve), Baxter v Sandown Lions (Baxter Park), Drouin Dragons v Somerville Eagles (Bellbird Park). SATURDAY 3.15pm: Box Hill Utd v Southern Utd (Wembley Park). SATURDAY 7pm: Heatherton Utd v Frankston Pines (Bosnia &amp; Herzegovina Centre).