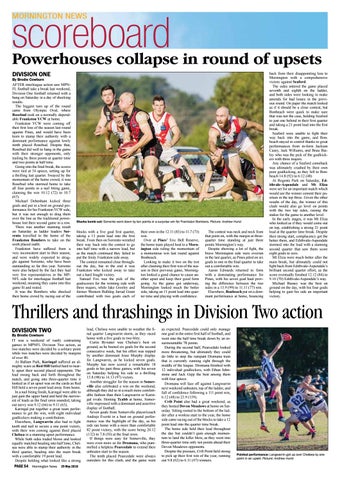 Powerhouses collapse in round of upsets DIVISION ONE

By Brodie Cowburn AFTER interleague action saw MPNFL football take a break last weekend, Division One football returned with a bang on Saturday in a day of shocking results. The biggest turn up of the round came from Olympic Oval, where Rosebud took on a normally dependable Frankston YCW at home. Frankston YCW were coming off their first loss of the season last round against Pines, and would have been keen to stamp their authority with a dominant performance against lowly ninth placed Rosebud. Despite that, Rosebud did well to hang in the game with their stronger opponents, only trailing by three points at quarter time and two points at half time. Going into the final break, the scores were tied at 54 apiece, setting up for a thrilling last quarter. Swayed by the momentum of the home crowd, it was Rosebud who stormed home to take all four points in a nail biting game, claiming the win 10.12 (72) to 10.7 (67) Michael Debenham kicked three goals and put in a best on ground performance for his Frankston YCW side, but it was not enough to drag them over the line as the traditional powerhouse lost their second game in a row. There was another stunning result on Saturday as ladder leaders Sorrento travelled to the home of the Frankston Bombers to take on the sixth placed outfit. Frankston have suffered from a very inconsistent start to their season, and were widely expected to struggle against Sorrento, who have been outstanding so far this year. Sorrento were also helped by the fact they had very few representatives in the MPNFL side for interleague football last weekend, meaning they came into this game fit and rested. It was the Bombers who shocked their home crowd by racing out of the

Sharks bomb out: Sorrento went down by ten points in a surprise win for Frankston Bombers. Picture: Andrew Hurst

blocks with a five goal first quarter, taking a 13 point lead into the first break. From then on Sorrento wrestled their way back into the contest to go into half time with a narrow lead, but as the match continued they failed to put the feisty Frankston side away. The contest remained close throughout the day, but in the end it was Frankston who kicked away to take out a hard fought victory. Samuel Fox was the pick of the goalscorers for the winning side with three majors, while Jake Greeley and former Western Bulldog Jarrad Grant contributed with two goals each of

their own in the 12.11 (83) to 11.7 (73) win. Over at Pines’ Eric Bell Reserve, the home team played host to a Mornington side riding the momentum of a momentous win last round against Bonbeach. Looking to make it two on the trot after claiming their first win of the season in their previous game, Mornington looked a good chance to cause another upset and keep their good form going. As the game got underway, Mornington looked much the better side, taking an 11 point lead into quarter time and playing with confidence.

The contest was neck and neck from that point on, with the margin at threequarter time standing at just three points Mornington’s way. Despite showing a lot of fight, the brave Mornington side were overrun in the last quarter, as Pines piled on six goals to one in the final quarter to take out a comfortable win. Aaron Edwards returned to form with a dominating performance for Pines, with his seven goal haul proving the difference between the two sides in a 15.9 (99) to 11.11 (77) win. Elsewhere, Bonbeach put on a dominant performance at home, bouncing

back from their disappointing loss to Mornington with a comprehensive victory against Seaford. The sides entered the game placed seventh and eighth on the ladder, and both sides were looking to make amends for bad losses in the previous round. On paper the match looked as if it should be a close contest, but Bonbeach were quick to make sure that was not the case, holding Seaford to just one behind in their first quarter and taking a 21 point lead into the first break. Seaford were unable to fight their way back into the game, and Bonbeach stayed in control thanks to great performances from in-form Jackson Casey, Jack Williams, and Beau Bailey who was the pick of the goalkickers with three majors. Any chance of a Seaford comeback was ultimately crushed by their own poor goalkicking, as they fell to Bonbeach 14.8 (92) to 6.12 (48) At Regents Park on Saturday, Edithvale-Aspendale and Mt Eliza were set for an important match which would see the winner cement their position in the top three. Given the other results of the day, the winner of this clash would also go level on points with the two top sides, raising the stakes for the game to another level. In the early stages, it was Mt Eliza who looked as if they would come out on top, establishing a strong 21 point lead at the quarter time break. Despite their strong start, complacency got the better them, and Edithvale-Aspendale stormed into the lead with a stunning second quarter that saw them score eight goals to zero. Mt Eliza were much better after the main break, but ultimately could not fight back from Edithvale-Aspendale’s brilliant second quarter effort, as the score eventually finished 12.12 (84) to 9.16 (70) Edithvale-Aspendale’s way. Michael Bussey was the best on ground on the day, with his four goals helping to gain his side an important victory.

By Brodie Cowburn IT was a weekend of vastly contrasting games in MPNFL Division Two action, as two matches were decided by a solitary point while two matches were decided by margins of over 80. At Ballam Park, Karingal suffered an almighty scare as Red Hill battled hard to nearly upset their second placed opponents. The lead swung back and forth throughout the match, and going into three-quarter time it looked as if an upset was on the cards as Red Hill held a seven point lead away from home. In a nail biting finish, Karingal were able to just gain the upper hand and held the narrowest of leads as the final siren sounded, taking out nervy win 9.12 (66) to 9.11 (65). Karingal put together a great team performance to get the win, with eight individual goalkickers making a contribution. Elsewhere, Langwarrin also had to fight tooth and nail to secure a one point victory, with their win coming against third placed Chelsea in a stunning upset performance. While both sides traded blows and looked equally matched heading into half time, Chelsea were able to stamp their authority in the third quarter, heading into the main break with a comfortable 19 point lead. Despite holding what looked like a strong

lead, Chelsea were unable to weather the final quarter Langwarrin storm, as they raced home with a five goals to two blitz. Curtis Bywater was Chelsea’s best on ground, as he booted six goals for the second consecutive week, but his effort was topped by another dominant Jesse Murphy display for Langwarrin, as he kicked seven goals. Murphy has now scored a remarkable 18 goals in his past three games, with his seven on Saturday helping his side to a thrilling 15.8 (98) to 14.13 (97) victory. Another struggler for the season in Somerville also celebrated a win on the weekend, although they did so in a much more comfortable fashion than their Langwarrin or Karingal rivals. Hosting Tyabb at home, Somerville impressed with a dominant and assertive display of football. Seven goals from Somerville player/coach Andrejs Everitt in a best on ground performance was the highlight of the day, as his side ran home with a more than comfortable 82 point victory, with the score being 20.12 (132) to 7.8 (50) at the final siren. If things were easy for Somerville, they were even more so for Dromana, who pummelled a helpless Pearcedale to extend their unbeaten start to the season. The tenth placed Pearcedale were always outsiders for this clash, and the game went

as expected. Pearcedale could only manage one goal in the entire first half of football, and went into the half time break down by an insurmountable 78 points. During the second half, Pearcedale looked more threatening, but ultimately they could do little to stop the rampant Dromana train that is currently running right through the middle of the league. Dromana finished with 12 individual goalkickers, with Ethan Johnstone and Jack Gipp the best among them with four apiece. Dromana will face off against Langwarrin next weekend unbeaten, top of the ladder, and full of confidence following a 111 point win, 6.12 (48) to 25.9 (159). Crib Point also had a great weekend, as they hosted Devon Meadows at home on Saturday. Sitting rooted to the bottom of the ladder after a winless start to the year, the home side came racing out of the blocks to take a 12 point lead into the quarter time break. The home side held their lead throughout the day but couldn’t gain enough momentum to land the killer blow, as they went into three-quarter time only ten points ahead their Devon Meadows opponents. Despite the pressure, Crib Point held strong to pick up their first win of the year, running out 9.8 (62) to 6.11 (47) winners.

Pointed performance: Langwarrin got up over Chelsea by one point in an upset. Picture: Andrew Hurst