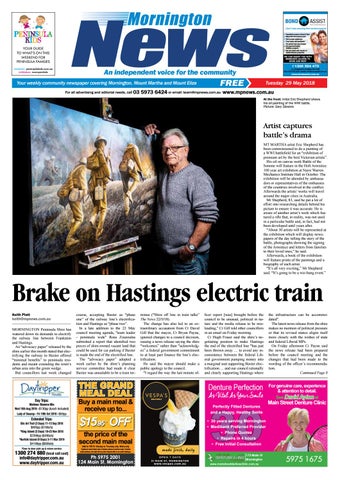 ...Don’t miss securing that wanted property ✓ Immediate access to Bond & Rent ✓ Move into that property now ✓ Fast prompt assistance ✓ Easy terms and conditions ✓ No upfront fees and charges ✓ Pre approval before finding a property ✓ We can assist with transfer of bonds between properties

Artist captures battle’s drama MT MARTHA artist Eric Shepherd has been commissioned to do a painting of a WWI battlefield for an “exhibition of premium art by the best Victorian artists”. His oil on canvas work Battle of the Somme will feature in the Holt Armistice 100 year art exhibition at Narre Warren Mechanics Institute Hall in October. The exhibition will be attended by ambassadors or representatives of the embassies of the countries involved in the conflict. Afterwards the artists’ works will travel around the major cities in Australia. Mr Shepherd, 83, said he put a lot of effort into researching details behind his picture to ensure it was accurate. He is aware of another artist’s work which featured a rifle that, in reality, was not used in a particular battle and, in fact, had not been developed until years after. “About 30 artists will be represented at the exhibition which will display newspapers of the day telling the story of the battle, photographs showing the signing of the Armistice and letters from families to their loved ones,” he said. Afterwards, a book of the exhibition will feature prints of the paintings and a biography of each artist. “It’s all very exciting,” Mr Shepherd said. “It’s going to be a wiz-bang event.”

Brake on Hastings electric train Keith Platt keith@mpnews.com.au MORNINGTON Peninsula Shire has watered down its demands to electrify the railway line between Frankston and Hastings. An “advocacy paper” released by the shire earlier this month stated that electrifying the railway to Baxter offered “minimal benefits” to peninsula residents and meant extending the town’s urban area into the green wedge. But councillors last week changed

course, accepting Baxter as “phase one” of the railway line’s electrification and Hastings as “phase two”. In a late addition to the 22 May council meeting agenda, "team leader - peninsula wide" Rosa Zouzoulas submitted a report that identified two pieces of shire-owned vacant land that could be used for car parking if Baxter is made the end of the electrified line. The “advocacy paper” adopted a week earlier by the shire’s planning service committee had made it clear Baxter was unsuitable to be a train ter-

minus (“Shire off line in train talks” The News 22/5/18). The change has also led to an extraordinary accusation from Cr David Gill that the mayor, Cr Bryan Payne, ignored changes to a council decision, issuing a news release saying the shire “welcomes” rather than “acknowledges” a federal government commitment to at least part finance the line’s electrification. He said the mayor should make a public apology to the council. “I regard the way the last minute of-

Buy a main meal & receive up to... the price of the second main meal Valid to 7/6/18. Monday to Thursday only. Bistro only.

ficer report [was] brought before the council to be unusual, political in nature and the media release to be misleading,” Cr Gill told other councillors in an email on Friday morning. Cr Hugh Fraser said the shire’s negotiating position to make Hastings the end of the electrified line “has just been thrown away … to avoid any inconsistency between the federal Liberal government pumping money into a marginal seat supporting Baxter electrification … and our council rationally and clearly supporting Hastings where

the infrastructure can be accommodated". The latest news release from the shire makes no mention of political pressure or that its revised stance aligns itself more closely with the wishes of state and federal Liberal MPs. On Friday afternoon Cr Payne said the news release had been prepared before the council meeting and the changes that had been made to the wording of the officer’s recommendation. Continued Page 8