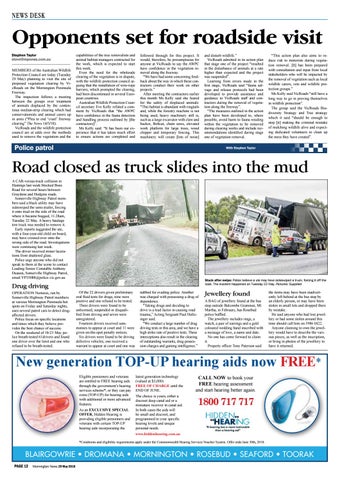 Opponents set for roadside visit Stephen Taylor steve@mpnews.com.au MEMBERS of the Australian Wildlife Protection Council are today (Tuesday 29 May) planning to visit the site of proposed vegetation clearing by VicRoads on the Mornington Peninsula Freeway. The inspection follows a meeting between the groups over treatment of animals displaced by the contentious median-strip clearing which had conservationists and animal carers up in arms (“Plea to end ‘cruel’ freeway clearing” The News 14/5/18). VicRoads and the wildlife protection council are at odds over the methods used to remove the vegetation and the

capabilities of the tree removalists and animal habitat managers contracted for the work, which is expected to start this week. Even the need for the wholesale clearing of the vegetation is in dispute, with the wildlife protection council arguing that the installation of wire-rope barriers, which prompted the clearing, had been discontinued in several European countries. Australian Wildlife Protection Council secretary Eve Kelly refuted a comment by VicRoads that “the AWPC have confidence in the fauna detection and handling process outlined by [the contractors]”. Ms Kelly said: “It has been our experience that it has taken much effort to ensure actions are completed and

followed through for this project. It would, therefore, be presumptuous for anyone at VicRoads to say the AWPC have confidence in the vegetation removal along the freeway. “We have had some concerning feedback about the way in which these contractors conduct their work on other projects.” After meeting the contractors earlier this month Ms Kelly said she feared for the safety of displaced animals: “This habitat is abundant with ringtails and, while the forestry machine is not being used, heavy machinery still is, such as a large excavator with claw and bucket, Bobcat, chain saws, elevated work platform for large trees, wood chipper and temporary fencing. This machinery will create [lots of noise]

and disturb wildlife.” VicRoads admitted in its action plan that stage one of the project “resulted in the disturbance of animals at a rate higher than expected and the project was suspended”. Learning from errors made in the first stage, VicRoads said “fauna salvage and release protocols had been developed to provide assistance and guidance to VicRoads staff and contractors during the removal of vegetation along the freeway”. “The measures outlined in the action plan have been developed to, where possible, avoid harm to fauna residing within the vegetation to be removed during clearing works and include recommendations identified during stage one of vegetation removal.

“This action plan also aims to reduce risk to motorists during vegetation removal. [It] has been prepared with consultation and input from local stakeholders who will be impacted by the removal of vegetation such as local wildlife carers, vets and wildlife protection groups.” Ms Kelly said VicRoads “still have a long way to go in proving themselves in wildlife protection”. The group said the VicRoads Biodiversity Strategy and Tree strategy which it said “should be enough to stop [it] making the criminal mistake of mulching wildlife alive and expecting dedicated volunteers to clean up the mess they have created”.

Road closed as truck slides into the mud A CAR-versus-truck collision in Hastings last week blocked Boes Road for several hours between Graydens and Hodgins roads. Somerville Highway Patrol members said a black utility may have sideswiped the semi-trailer, forcing it onto mud on the side of the road where it became bogged, 11.28am, Tuesday 22 May. A heavy haulage tow truck was needed to remove it. Early reports suggested the ute, with a four-year-old child on board, may have crossed over onto the wrong side of the road. Investigations were continuing last week. The driver received minor lacerations from shattered glass. Police urge anyone who did not speak to them at the scene to contact Leading Senior Constable Anthony Deason, Somerville Highway Patrol, email VP35088@police.vic.gov.au

Drug driving OPERATION Nemesis, run by Somerville Highway Patrol members at various Mornington Peninsula hot spots on Friday and Saturday nights, uses several patrol cars to detect drugaffected drivers. Police focus on specific locations and times which they believe provides the best chance of success. On the weekend of 18-21 May police breath tested 61drivers and found one driver over the limit and one who refused to be breath-tested.

Stuck after swipe: Police believe a ute may have sideswiped a truck, forcing it off the road. The incident happened on Tuesday 22 May. Pictures: Supplied

Of the 22 drivers given preliminary oral fluid tests for drugs, nine were positive and one refused to be tested. Three drivers were found to be unlicensed, suspended or disqualified from driving and seven were unregistered. Fourteen drivers received summonses to appear at court and 11 were given on-the-spot penalty notices. Six drivers were found to be driving defective vehicles; one received a warrant to appear at court and one was

nabbed for evading police. Another was charged with possessing a drug of dependence. “Taking drugs and deciding to drive is a lead factor in causing road trauma,” Acting Sergeant Paul Holtzinger said. “We conduct a large number of drug driving tests in this area, and we have a high strike rate of positive tests. These interceptions also result in the clearing of outstanding warrants, drug possession charges and gaining intelligence.”

Jewellery found A BAG of jewellery found at the bus stop outside Balcombe Grammar, Mt Martha, in February, has Rosebud police baffled. The jewellery includes rings, a watch, a pair of earrings and a gold coloured wedding band inscribed with a message of love, a name and date. No one has come forward to claim it. Property officer Tony Paterson said

the items may have been inadvertently left behind at the bus stop by an elderly person, or may have been stolen in small lots and dropped there by mistake. He said anyone who had lost jewellery or had some stolen around this time should call him on 5986 0422. Anyone claiming to own the jewellery would have to describe the various pieces, as well as the inscription, or bring in photos of the jewellery to have it returned.

latest generation technology (valued at $3,000) FREE OF CHARGE until the END OF JUNE.