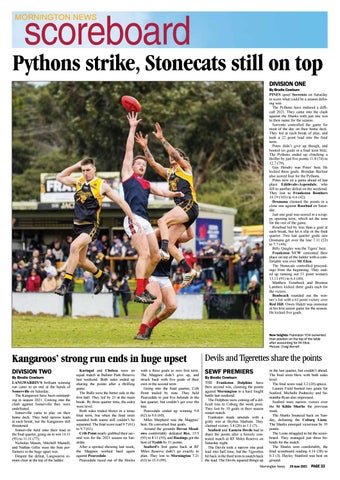 By Brodie Cowburn PINES upset Sorrento on Saturday to score what could be a season defining win. The Pythons have endured a difficult 2021. They came into the clash against the Sharks with just one win to their name for the season. Sorrento controlled the game for most of the day on their home deck. They led at each break of play, and took a 22 point lead into the final term. Pines didn’t give up though, and booted six goals in a final term blitz. The Pythons ended up clinching a thriller by just five points 11.8 (74) to 12.7 (79). Guy Hendry was Pines’ best. He kicked three goals. Brendan Barfoot also scored four for the Pythons. Pines now sit a game ahead of last place Edithvale–Aspendale, who fell to another defeat on the weekend. They lost to Frankston Bombers 14.19 (103) to 6.6 (42). Dromana claimed the points in a close one against Rosebud on Saturday. Just one goal was scored in a scrappy opening term, which set the tone for the rest of the game. Rosebud led by less than a goal at each break, but let it slip in the final quarter. Two last quarter goals saw Dromana get over the line 7.11 (53) to 7.7 (49). Billy Quigley was the Tigers’ best. Frankston YCW cemented their place on top of the ladder with a comfortable win over Mt Eliza. The Stonecats controlled proceedings from the beginning. They ended up running out 51 point winners 13.13 (91) to 6.4 (40). Matthew Troutbeck and Brenton Lambert kicked three goals each for the victors. Bonbeach rounded out the winner’s list with a 63 point victory over Red Hill. Owen Hulett was immense in his first senior game for the season. He kicked five goals.

New heights: Frankston YCW cemented their position on the top of the table after accounting for Mt Eliza. Picture: Craig Barrett

By Brodie Cowburn LANGWARRIN’S brilliant winning run came to an end at the hands of Somerville on Saturday. The Kangaroos have been outstanding in season 2021. Coming into the clash against Somerville they were undefeated. Somerville came to play on their home deck. They held narrow leads at each break, but the Kangaroos still threatened. Somerville held onto their lead in the final quarter, going on to win 14.11 (95) to 11.11 (77). Nicholas Mason, Mitchell Mantell, and Nathan Gillis were the best performers in the huge upset win. Despite the defeat, Langwarrin remain clear at the top of the ladder.

Karingal and Chelsea were an equal match at Ballam Park Reserve last weekend. Both sides ended up sharing the points after a thrilling game. The Bulls were the better side in the first half. They led by 23 at the main break. By three quarter time, the sides were level. Both sides traded blows in a tense final term, but when the final siren sounded both teams still couldn’t be separated. The final score read 9.7 (61) to 9.7 (61). Crib Point nearly grabbed their second win for the 2021 season on Saturday. After a spirited showing last week, the Magpies worked hard again against Pearcedale. Pearcedale raced out of the blocks

with a three goals to zero first term. The Magpies didn’t give up, and struck back with five goals of their own in the second term. Going into the final quarter, Crib Point trailed by nine. They held Pearcedale to just five behinds in the last quarter, but couldn’t get over the line. Pearcedale ended up winning 9.8 (62) to 9.6 (60). Miles Shepherd was the Magpies’ best. He converted four goals. Around the grounds Devon Meadows comfortably defeated Rye, 15.5 (95) to 8.11 (59), and Hastings got the best of Tyabb by 31 points. Seaford’s first game back at RF Miles Reserve didn’t go exactly to plan. They lost to Mornington 7.21 (63) to 15.9 (99).

By Brodie Cowburn THE Frankston Dolphins have their second win, claiming the points against Mornington in a hard fought battle last weekend. The Dolphins were coming off a difficult loss to Coburg the week prior. They lost by 10 goals in their season restart match. Frankston made amends with a gritty win at Skybus Stadium. They claimed victory 3.8 (26) to 1.1 (7). Seaford and Eastern Devils had to share the points after a fiercely contested match at RF Miles Reserve on Saturday night. The Devils took a narrow one goal lead into half time, but the Tigerettes hit back in the third term to snatch back the lead. The Devils squared things up

in the last quarter, but couldn’t ahead. The final siren blew with both sides level. The final score read 3.2 (20) apiece. Lauren Field booted two goals for Seaford. Michelle Podnecky and Samantha Ryan also impressed. Seaford were narrow victors over the St Kilda Sharks the previous week. The Sharks bounced back on Sunday, defeating the Coburg Lions. The Sharks emerged victorious by 35 points. The Lions struggled to hit the scoreboard. They managed just three behinds for the match. The Sharks won comfortably, the final scoreboard reading 4.14 (38) to 0.3 (3). Hayley Stanford was best on ground.