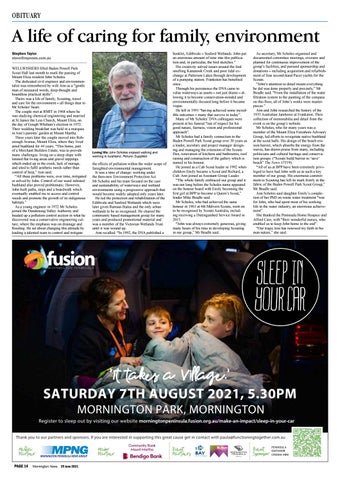 A life of caring for family, environment Stephen Taylor steve@mpnews.com.au WELLWISHERS filled Baden Powell Park Scout Hall last month to mark the passing of Mount Eliza resident John Scholes. The dedicated civil engineer and environmentalist was remembered by wife Ann as a “gentle man of measured words, deep-thought and boundless practical skills”. Theirs was a life of family, Scouting, travel and care for the environment – all things dear to Mr Scholes’ heart. The couple met at RMIT in 1968 where he was studying chemical engineering and married at St James the Less Church, Mount Eliza, on the day of Gough Whitlam’s election in 1972. Their wedding breakfast was held in a marquee in Ann’s parents’ garden at Mount Martha. Three years later the couple moved into Roborough Avenue, Mount Eliza, where they lived amid bushland for 44 years. “This home, part of a Merchant Builders Estate, was to provide many challenges: living on a steep slope with limited flat living areas and gravel toppings which ended up in the creek, lack of storage, and sited to fulfil aesthetic needs rather than control of heat,” Ann said. “All these problems were, over time, mitigated or solved by John. Control of our weed infested bushland also proved problematic. However, John built paths, steps and a boardwalk which eventually enabled me to access and control weeds and promote the growth of its indigenous habitats.” As a young engineer in 1972 Mr Scholes joined the Dandenong Valley Authority and headed up a pollution control section in what he discovered was a conservative engineering culture, where the emphasis was on drainage and flooding. He set about changing this attitude by leading a talented team to control and mitigate

the effects of pollution within the wider scope of farsighted environmental management. It was a time of change: working under the then-new Environment Protection Act Mr Scholes and his team focused on the care and sustainability of waterways and wetland environments using a progressive approach that would become widely adopted only years later. He led the protection and rehabilitation of the Edithvale and Seaford Wetlands which were later given Ramsar-Status and the only urban wetlands to be so recognised. He chaired the community based management group for many years and produced promotional material and was a member of the Victorian Wetlands Trust until it was wound up. Ann recalled: “In 1992, the DVA published a

booklet, Edithvale – Seaford Wetlands. John put an enormous amount of time into this publication and, in particular, the bird sketches.” His creativity solved issues around the foul smelling Kananook Creek and poor tidal exchange at Patterson Lakes through development of a pumping station. Frankston has benefited since. Through his persistence the DVA came to value waterways as assets – not just drains – allowing it to become conservation-minded and environmentally-focused long before it became vogue. He left in 1991 “having achieved some incredible outcomes – many that survive to today”. Many of Mr Scholes’ DVA colleagues were present at his funeral “out of respect for his good nature, fairness, vision and professional approach”. Mr Scholes had a family connection to the Baden Powell Park Scout group over 30 years as a leader, secretary and project manager designing and managing the extension of the Scouts Den, renovation of kitchens and bathrooms, roof raising and construction of the gallery which is named in his honour. He joined as a Cub Scout leader in 1992 when children Emily became a Scout and Richard, a Cub. Ann joined as Assistant Group Leader. “The whole family embraced our group and it was not long before the Scholes name appeared on the honour board with Emily becoming the first girl at BPP to become a Queen’s Scout,” leader Mike Beadle said. Mr Scholes, who had achieved the same honour in 1963 at 4th Malvern Scouts, went on to be recognised by Scouts Australia, including receiving a Distinguished Service Award in 2015. “John was always extremely generous, giving many hours of his time to developing Scouting in our group,” Mr Beadle said.

As secretary, Mr Scholes organised and documented committee meetings, oversaw and planned for continuous improvement of the group’s facilities, and pursued sponsorship and donations – including acquisition and refurbishment of four second-hand Pacer yachts for the Scouts. “John’s attention to detail meant everything he did was done properly and precisely,” Mr Beadle said. “From the installation of the water filtration system to the painting of the compass on this floor, all of John’s works were masterpieces.” Ann and John researched the history of the 1935 Australian Jamboree at Frankston. Their collection of memorabilia and detail from the event is on the group’s website. Mr Scholes, who for many years was a member of the Mount Eliza Foreshore Advisory Group, led efforts to revegetate native bushland at the scout halls. His design of the beach erosion barrier, which absorbs the energy from the waves, has drawn praise from many, including politicians and cultural heritage and conservation groups. (“Scouts build barrier to ‘save’ beach” The News 1/7/19). “All of us at BPP have been extremely privileged to have had John with us as such a key member of our group. His enormous commitment to Scouting has left its mark firmly in the fabric of the Baden Powell Park Scout Group,” Mr Beadle said. Ann Scholes said daughter Emily’s completion of her PhD on waste water treatment “was for John, who had spent most of his working life in the water industry, an enormous achievement”. She thanked the Peninsula Home Hospice and Alfred Care, with “their wonderful nurses, who enabled us to keep John home to the end”. “Our tragic loss has renewed my faith in human nature,” she said.

‘It takes a Village.’