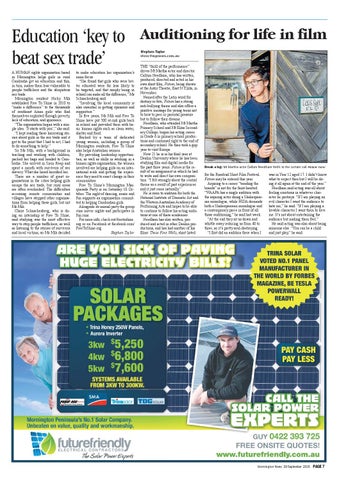 Education ‘key to beat sex trade’ A HUMAN rights organisation based in Mornington helps girls in rural Cambodia get an education and this, in turn, makes them less vulnerable to people traffickers and the ubiquitous sex trade. Mornington resident Nicky Mih established Free To Shine in 2010 to “make a difference” to the thousands of southeast Asian girls who find themselves exploited through poverty, lack of education, and ignorance. “The organisation began with a simple idea: ‘It starts with you’,” she said. “I kept reading these harrowing stories about girls in the sex trade and it got to the point that I had to act, I had to do something to help.” So Ms Mih, with a background in teaching and working with children, packed her bags and headed to Cambodia. She arrived in Siem Reap and spent a month with survivors of sex slavery. What she heard horrified her. There are a number of great organisations in the cities helping girls escape the sex trade, but rural areas are often overlooked. The difficulties accessing remote communities and villages have stopped other organisations from helping these girls, but not Ms Mih. Claire Schnackenberg, who is doing an internship at Free To Shine, said studying was the most effective way to stop people traffickers, as well as listening to the stories of survivors and local victims, so Ms Mih decided

to make education her organisation’s main focus. “She found that girls who were better educated were far less likely to be targeted, and that simply being in school can make all the difference,” Ms Schnackenberg said. “Involving the local community is also essential in getting sponsors and supporters.” In five years, Ms Mih and Free To Shine have put 500 at-risk girls back in school and provided them with basic human rights such as clean water, shelter and food. Backed by a team of dedicated young women, including a group of Mornington residents, Free To Shine also helps Australian women. By providing leadership opportunities, as well as skills in working in a human rights organisation, the women involved are helping girls on an international scale and getting the experience they need to enact change in their communities. Free To Shine’s Mornington Masquerade Party is on Saturday 10 October. The night of dancing, music and fun supports an organisation committed to helping Cambodian girls. Alongside its annual party the group runs movie nights and participates in fun runs. For more info, check out freetoshine. org or on Facebook at facebook.com/ FreeToShine.org Stephen Taylor

Auditioning for life in film Stephen Taylor steve@mpnews.com.au THE “thrill of the performance” drives Mt Martha actor and director Callum Needham, who has written, produced, directed and acted in his own short film, Fatum, being shown at the Astor Theatre, East St Kilda, in November. Named after the Latin word for destiny or fate, Fatum has a strong anti-bullying theme and also offers a positive message for young teens not to bow to peer or parental pressure but to follow their dreams. Needham, who attended Mt Martha Primary School and Mt Eliza Secondary College, began his acting career in Grade 6 in primary school productions and continued right to the end of secondary school. He then took a gap year to visit Europe. Now 21 he is in his final year at Deakin University where he has been studying film and digital media for the past three years. Fatum is the result of an assignment in which he had to write and direct his own composition. “I felt strongly about the central theme as a result of past experiences and it just came naturally.” He is soon to audition for both the National Institute of Dramatic Art and the Western Australian Academy of Performing Arts and hopes to be able to continue to follow his acting ambitions at one of these academies. Needham has also written, produced and acted in other Deakin productions, and has had another of his films: These Four Walls, short listed

for the Rosebud Short Film Festival. Fatum may be entered this year. Aspiring to a career “treading the boards” is not for the faint-hearted. “WAAPA has a single audition with the aspiring actor doing a Shakespearian monologue, while NIDA demands both a Shakespearean monologue and a contemporary piece in front of all those auditioning,” he said last week. “At the end they sit us down and whittle away reducing us from 40 to three, so it’s pretty soul-destroying. “I first did an audition there when I

was in Year 12 aged 17. I didn’t know what to expect then but I will be doing it all again at the end of the year.” Needham said acting was all about feeling emotions in whatever character he portrays. “If I am playing an evil character I want the audience to hate me,” he said. “If I am playing a lovable character I want them to love me. It’s not about entertaining the audience but making them feel.” He said acting was also about being someone else. “You can be a child and just play,” he said.