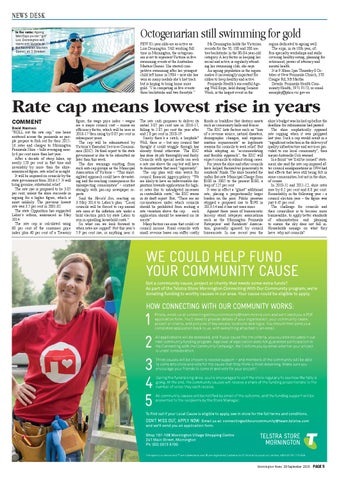 In the swim: Ageing Well Expo poster “girl” Lois Dennington will represent Victoria at the Australian Masters Games on 3 October.

FEW 81-year-olds are as active as Lois Dennington. Still working full time in Mornington, the octogenarian is set to represent Victoria in five swimming events at the Australian Masters Games. She started competitive swimming after her youngest child left home in 1984 – now she has won so many medals she’s lost track but is hoping to bring home more gold. “I’m competing in five events: three backstroke and two freestyle.”

Ms Dennington holds the Victorian records for the 50, 100 and 200 metres backstroke in the 80-84-year-old category. A key factor in keeping her social and active is regularly attending her swimming club, she says. An ageing population in the region makes it increasingly important for oldies to keep healthy and active. Peninsula Health’s successful Ageing Well Expo, held during Seniors Week, is the largest event in the

Rate cap means lowest rise in years COMMENT David Harrison “ROLL out the rate cap,” one hears muttered across the peninsula as people prepare to fork out for their 201516 rates and charges to Mornington Peninsula Shire – bills averaging nearly 6 per cent more than last year. After a decade of steep hikes, up nearly 120 per cent in that time and invariably by more than the shireannounced figure, rate relief is in sight. It will be imposed on councils by the state government from 2016-17. It will bring genuine, substantial relief. The rate rise is proposed to be 3.05 per cent, unless the shire succeeds in arguing for a higher figure, which is most unlikely. The previous lowest rate was 3.5 per cent in 2001-02. The state Opposition has supported Labor’s reform, announced in May 2014. The rate cap is calculated using 60 per cent of the consumer price index plus 40 per cent of a Treasury

figure, the wage price index – wages are a major council cost – minus an efficiency factor, which will be zero in 2016-17 then rising by 0.05 per cent in subsequent years. The cap will be administered by Victoria’s Essential Services Commission (ESC). Its final report to the state government is due to be submitted no later than this week. The dire warnings emitting from such anti-cap groups as the Municipal Association of Victoria – “This shortsighted approach could have devastating and far-reaching consequences for unsuspecting communities” – contrast strongly with pro-cap newspaper reports. Said the Herald Sun, reacting on 3 May 2014 to Labor’s plan: “Local councils will be forced to cap annual rate rises at the inflation rate under a bold election pitch by state Labor to rein in spiralling household costs.” So what can we look forward to when rates are capped? Not this year’s 5.9 per cent rise, or anything near it.

The rate curb proposes to deliver its initial 3.05 per cent rise in 2016-17, falling to 2.85 per cent the year after and 2.8 per cent in 2018-19. Surely there’s a catch, a loophole? Well, there is – but any council that thought it could wriggle through has already found otherwise. The ESC has done its job thoroughly and fairly. Councils with special needs can seek a rate rise above the cap but will have to demonstrate that need “rigorously”. The cap plan will also watch for council financial jiggery-pokery. “We are likely to have an unfavourable disposition towards applications for higher rates due to unbudgeted increases in controllable costs,” the ESC warns in its draft report. But, “There are no circumstances under which councils should be prohibited from seeking a rate variation above the cap … each application should be assessed on its merits”. Many factors can arise that could cut council income. Rural councils with small revenue bases can suffer costly

floods or bushfires that destroy assets such as community halls and fences. The ESC lists factors such as “loss of a revenue source, natural disasters, demographic changes, and superannuation requirements” as legitimate reasons for councils to seek relief. But while adopting an “accommodating and flexible approach”, the ESC will expect councils to submit strong cases. For years the shire and other councils have helped themselves generously to residents’ funds. The shire boosted the unfair flat-rate Municipal Charge from $100 in 2005 to the present $180, a leap of 125 per cent. It was in effect a “ghost” additional rate, placing a proportionally larger burden on the poor. Public pressure stopped a proposed rise to $190 in 2013-14 and it has not risen since. Against these years of bureaucratic larceny stood ratepayer associations such as the Mornington Peninsula Ratepayers’ and Residents’ Association, generally ignored by council bureaucrats. In one recent year the

shire’s budget was locked up before the deadline for submissions had passed. The shire emphatically opposed rate capping when it was proppsed last year. Such a cap would result in a “significant reduction in the delivery of quality infrastructure and services provided to our local community”, then mayor Antonella Celi warned. In a florid “we’ll all be rooned” statement, she said the rate cap imposed after council amalgamations in 1994 had had effects that were still being felt in some communities, but not in the shire, of course. In 2010-11 and 2011-12, shire rates rose by 6.2 per cent and 6.8 per cent. Remarkably, in the following year – a council election year – the figure was just 4.45 per cent. The challenge for councils and their councillors is to become more businesslike, to apply better standards of administration and planning to ensure the sky does not fall in. Households manage on what they have: why not councils?