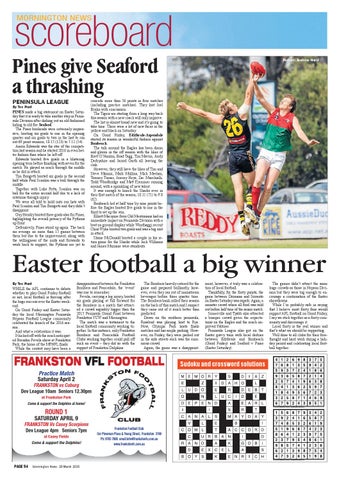 By Toe Punt PINES made a big statement on Easter Saturday that it is ready to take another step in Peninsula Division after dishing out an old fashioned hiding to old foe Seaford. The Pines bookends were extremely impressive, booting six goals to one in the opening quarter and six goals to two in the last to run out 69 point winners, 18.15 (123) to 7.12 (54). Aaron Edwards was the star of the competition last season and he started 2016 in even better fashion than where he left off. Edwards booted five goals in a blistering opening term before finishing with seven for the match. He played as much through the middle as he did in attack. Tim Bongetti booted six goals in the second half while Paul Scanlon was a bull through the middle. Together with Luke Potts, Scanlon was on ball for the entire second half due to a lack of rotations through injury. We were all told to hold onto our hats with Paul Scanlon and Tim Bongetti and they didn’t disappoint. Guy Hendry booted three goals also for Pines, highlighting the overall potency of the Pythons up front. Defensively, Pines stood up again. The back six average no more than 15 games between them but due to the improvement, along with the willingness of the mids and forwards to work back to support, the Pythons are yet to

concede more than 56 points in four matches (including practice matches). They lost Joel Bruhn with concussion. The Tigers are starting from a long way back this season with a new coach will only improve. The list is almost brand new and it’s going to take time. There were a lot of new faces in the yellow and black on Saturday. On Good Friday, Edithvale-Aspendale started its season in wonderful fashion against Bonbeach. The talk around the Eagles has been doom and gloom in the off season with the likes of Brett O’Hanlon, Brad Tagg, Tim Mavris, Jordy Derbyshire and Jarrod Garth all leaving the club. However, they still have the likes of Tim and Steve Mannix, Mark Mullins, Mick Meehan, Tommy Turner, Jeremy Heys, Zac Muschialli, Todd Woodbridge and Matt Kremmer running around, with a sprinkling of new talent. It was enough to knock the Sharks over in their first match of the season, 10.11 (71) to 9.8 (62). Bonbeach led at half time by nine points before the Eagles booted five goals to one in the third to set up the win. Elliott Macquire from Old Mentonians had an immediate impact on Peninsula Division with a best on ground display while Wonthaggi recruit Chris Wylie booted two goals and was a big unit in attack. Shane McDonald booted a couple in his return game for the Sharks while Jack Williams and James Murnane were standouts.

Easter football a big winner By Toe Punt WHILE the AFL continues to debate whether to play Good Friday football or not, local football is thriving after the huge success over the Easter weekend. On Good Friday and Easter Saturday the local Mornington Peninsula Nepean Football League community celebrated the launch of the 2016 season. And what a celebration it was. It kicked off with the much anticipated Brendan Fevola show at Frankston Park, the home of the MPNFL finals. While the contest may have been a

disappointment between the Frankston Bombers and Pearcedale, the ‘event’ was one to remember. Fevola, carrying a leg injury, booted six goals playing at full forward for the Bombers in a match that attracted a crowd arguably bigger than the 2015 Peninsula Grand Final between Frankston YCW and Mornington. The match was a testament to the local football community working together. In this instance, only Frankston Bombers and Pearcedale Football Clubs working together could pull off such an event – they did so with the support of Frankston Dolphins.

The Bombers heavily catered for the game and prepared brilliantly, however, even they ran out of mainstream beverages before three quarter time. The Bombers bank-rolled their season on the back of this match and I suspect they came out of it much better than predicted. Down on the southern peninsula, Rosebud was playing host to Rye. Now, Olympic Park hosts finals matches and has ample parking. However, on Friday, they were parked out in the side streets such was the enormous crowd. Again, the game was a disappoint-

at Frankston Park Come & support the Dolphins at home!

ment, however, it truly was a celebration of local football. Thankfully, for the footy purists, the game between Dromana and Sorrento on Easter Saturday was superb. Again, a monster crowd where all food was sold out before half time of the senior match. Somerville and Tyabb also attracted a bumper crowd given the expectations on the Eagles and the much improved Yabbies. Peninsula League also got on the Easter gravy train with local derbies between Edithvale and Bonbeach (Good Friday) and Seaford v Pines (Easter Saturday).

The games didn’t attract the same huge crowds as those in Nepean Division but they were big enough to encourage a continuation of the Easter showdowns. While I’m probably safe in saying that I believe most footy fans would support AFL football on Good Friday, I say we stick together as a footy community and discourage it. Local footy is the real winner and that’s what we should be supporting. Well done to all clubs for their forethought and hard work during a holiday period and celebrating local football together.