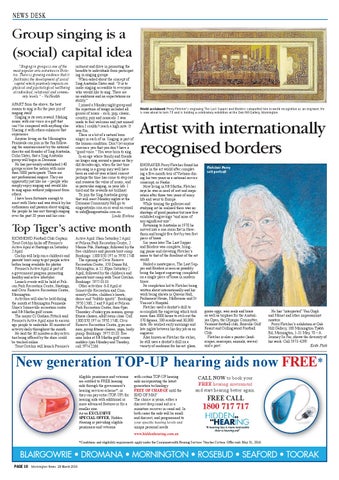 Group singing is a (social) capital idea â&#x20AC;&#x153;Singing in groups is one of the most popular arts activities in Victoria. There is growing evidence that it facilitates the development of social capital which positively impacts on physical and psychological wellbeing at individual, relational and community levels.â&#x20AC;? - VicHealth APART from the above, the best reason to sing is for the pure joy of singing itself. Singing is its own reward. Making music with our voice is a gift that canâ&#x20AC;&#x2122;t be compared with anything else. Sharing it with others enhances that experience. Anyone living on the Mornington Peninsula can join in the fun following the announcement by the national director and founder of Sing Australia, Colin Slater, that a Sing Australia group will begin in Dromana. He has previously established 140 groups across the nation with more than 5000 participants. These are not professional singers. They are apparently just like me â&#x20AC;&#x201C; people who simply enjoy singing and would like to sing again without judgement from others. I have been fortunate enough to meet with Slater and was struck by his enthusiasm and passion about singing, the people he has met through singing over the past 20 years and his com-

mitment and drive in promoting the benefits to individuals from participating in singing groups. When asked about the concept of Sing Australia Slater said: â&#x20AC;&#x153;It is to make singing accessible to everyone who would like to sing. There are no auditions and no expectations on ability.â&#x20AC;? I joined a Monday night group and the repertoire of songs included all genres of music - rock, pop, classic, country, jazz and musicals. I was made to feel welcome and just mimed when I couldnâ&#x20AC;&#x2122;t reach a high note. It was fun. There is a bit of a natural born singer in each of us. Singing is part of the human condition. Donâ&#x20AC;&#x2122;t let anyone convince you that you donâ&#x20AC;&#x2122;t have a â&#x20AC;&#x153;good voice.â&#x20AC;? You were born to sing. In an age where family and friends no longer sing around a piano as they did decades ago, when the last time you sang in a group may well have been an end-of-year school concert perhaps the time has come to step out and reassess the value of music, and in particular singing, in your life. I tried and the rewards are brilliant. To join the Sing Australia group that will meet Monday nights at the Dromana Community Hall go to singaustralia.com.au or send an email to info@singaustralia.com.au Linda Erskine

World acclaimed: Perry Fletcherâ&#x20AC;&#x2122;s engraving The Last Supper and Borders catapulted him to world recognition as an engraver. He is now about to turn 70 and is holding a celebratory exhibition at the Oak Hill Gallery, Mornington.

Artist with internationally recognised borders ENGRAVER Perry Fletcher found his niche in the art world after completing a five-month tour of Vietnam during his two years as a national service conscript, or Nasho. Now living in Mt Martha, Fletcher says he was in need of rest and inspiration after those two years of army life and went to Europe. While touring the galleries and studying art he realised there was no shortage of good painters but saw few exhibited engravings â&#x20AC;&#x153;and none of any significant sizeâ&#x20AC;?. Returning to Australia in 1970 he moved into a one-room flat in Hawthorn and bought five feet by two feet piece of brass. Six years later The Last Supper and Borders was complete, bringing praise and elevating Fletcherâ&#x20AC;&#x2122;s name to that of the forefront of the art world. Hailed a masterpiece, The Last Supper and Borders is seen as possibly being the largest engraving completed on a single piece of brass in modern times. Its completion led to Fletcher being written about internationally and his work being shown in Queens Hall, Parliament House, Melbourne and St Vincentâ&#x20AC;&#x2122;s Hospital. Fletcher used a dentistâ&#x20AC;&#x2122;s drill to accomplish the engraving which took more than 3000 hours to etch out the 370 figures, 500 scrolls and 30,000 dots. He worked early mornings and late nights between his day job as an engraver. Also known as Fletcher the etcher, he still uses a dentistâ&#x20AC;&#x2122;s drill on a variety of mediums for his art: glass,

with certain TOP-UP hearing aids incorporating the latest generation technology FREE OF CHARGE until the END OF MAY The choice is yours, either a discreet deep canal aid or a miniature receiver in canal aid. In both cases the aids will be small and discreet, and programmed to \RXUVSHFLÂżFKHDULQJOHYHOVDQG unique personal needs. www.hiddenhearing.com.au