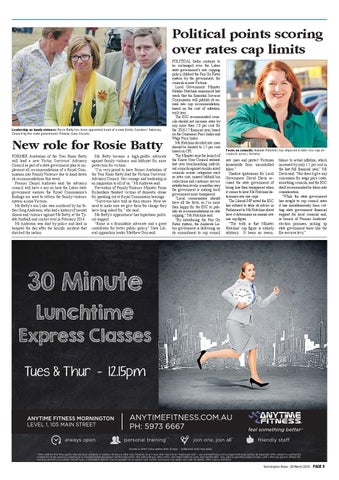 New role for Rosie Batty FORMER Australian of the Year Rosie Batty will lead a new Victim Survivors’ Advisory Council as part of a state government plan to implement all recommendations of a Royal Commission into Family Violence due to hand down its recommendations this week. Premier Daniel Andrews said the advisory council will have a say on how the Labor state government ensures the Royal Commission’s findings are used to reform the family violence system across Victoria. Ms Batty’s son Luke was murdered by his father Greg Anderson, who had a history of mental illness and violence against Ms Batty, at the Tyabb football and cricket oval in February 2014. Mr Anderson was shot by police and died in hospital the day after the horrific incident that shocked the nation.

Ms Batty became a high-profile advocate against family violence and lobbyist for more protection for victims. “I’m very proud to have former Australian of the Year Rosie Batty lead the Victims Survivors’ Advisory Council. Her courage and leadership is an inspiration to all of us,’’ Mr Andrews said. Prevention of Family Violence Minister Fiona Richardson thanked victims of domestic abuse for speaking out at Royal Commission hearings. “Survivors have told us their stories. Now we need to make sure we give them the change they have long asked for,’’ she said. Ms Batty’s appointment has bipartisan political support. “Rosie is a formidable advocate and a great contributor for better public policy,” State Liberal opposition leader Matthew Guy said.

POLITICAL barbs continue to be exchanged over the Labor state government’s rate capping policy, dubbed the Fair Go Rates system by the government, for councils across Victoria. Local Government Minister Natalie Hutchins announced last week that the Essential Services Commission will publish its annual rate cap recommendation, based on the cost of inflation, each year. The ESC recommended councils should not increase rates by any more than 2.8 per cent for the 2016-17 financial year, based on the Consumer Price Index and Wage Price Index. Ms Hutchins decided rate rises should be limited to 2.5 per cent based on CPI. The Minister says the launch of the Know Your Council website last year benchmarking individual councils against similar-sized councils across categories such as rates cost, missed rubbish bin collections and customer service satisfaction levels, is another way the government is making local government more transparent. “Local communities should have all the facts, so I’m more than happy for the ESC to publish its recommendations on rate capping,” Ms Hutchins said. “By introducing the Fair Go Rates system, the Andrews Labor government is delivering on its commitment to cap council

Focus on councils: Natalie Hutchins has imposed a rates rise cap on councils across Victoria.

rate rises and protect Victorian households from uncontrolled hikes.” Shadow spokesman for Local Government David Davis accused the state government of being less than transparent when it comes to how Ms Hutchins determines rate rise caps. The Liberal MP noted the ESC has refused to table its advice in Parliament to Ms Hutchins about how it determines an annual rate rise cap figure. “The truth is that Minister Hutchins’ cap figure is entirely arbitrary. It bears no resem-

blance to actual inflation, which increased by only 1.1 per cent in the last full financial year,” Mr Davis said. “Nor does it give any concession for wage price costs, something councils, and the ESC itself recommended be taken into consideration. “While the state government has sought to cap council rates it has simultaneously been cutting state government financial support for local councils and, in breach of Premier Andrews’ election promises, jacking up state government taxes like the fire services levy.”

ANYTIMEFITNESS.COM.AU PH: 5973 6667 ^Access to other Clubs applies after 31 days. ^^Additional costs may apply.