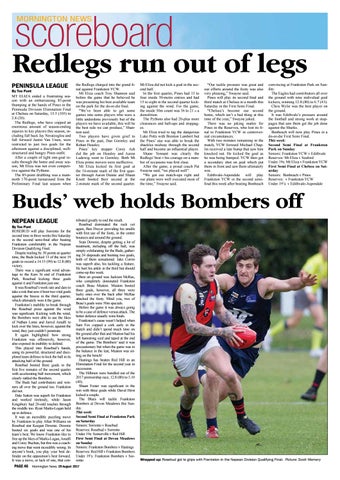 By Toe Punt MT ELIZA ended a frustrating season with an embarrassing 85-point thumping at the hands of Pines in the Peninsula Division Elimination Final at Chelsea on Saturday, 15.5 (105) to 2.8 (20). The Redlegs, who have copped an enormous amount of season-ending injuries to key players this season, including full back Jay Neratzoglou and full forward Justin Van Unen, were restricted to just two goals for the afternoon against a disciplined, wellstructured and hungry Pines outfit. After a couple of tight one-goal results through the home and away season, Mt Eliza was not even competitive against the Pythons. The 85-point drubbing was a mammoth 170-point turnaround from the Preliminary Final last season when

the Redlegs charged into the grand final against Frankston YCW. Mt Eliza coach Troy Shannon said before the game that he believed he was presenting his best available team on the park for the do-or-die final. “We’ve been able to get some games into some players who were a little underdone previously but of the players we have available, this will be the best side we can produce,” Shannon said. Two players have given grief to Pines in the past, Dan Gormley and Rohan Heasley. Pines’ key stopper Corey Ash did the job on Heasley and Aaron Ludewig went to Gormley. Both Mt Eliza prime movers were ineffective. Mt Eliza kicked its first goal at the 14-minute mark of the first quarter through Aaron Dunne and Shaun Knott booted their second at the 2-minute mark of the second quarter.

Mt Eliza did not kick a goal in the second half. In the first quarter, Pines had 15 to four inside 50-metre entries and had 15 to eight in the second quarter kicking against the wind. For the game, the inside 50m count was 56 to 21 – a demolition. The Pythons also had 20-plus more clearances and ball-ups and stoppages. Mt Eliza tried to tag the dangerous Luke Potts with Brenton Lambert but the Pines’ star was able to break the shackles midway through the second half and become an influential player. Shane Tennant was clearly the Redlegs’ best – his courage on a number of occasions was first class. After the game, a proud coach Pat Swayne said, “we played well”. “We got our match-ups right and our plans were well executed most of the time,” Swayne said.

“Our tackle pressure was great and our efforts around the footy was also very pleasing,” Swayne said. Pines will play its second final and third match at Chelsea in a month this Saturday in the First Semi Final. “Chelsea’s become our second home, which isn’t a bad thing at this time of the year,” Swayne joked. There was no joking matter for Pines in the Reserves, who lost its final to Frankston YCW in controversial circumstances. With two minutes remaining in the match, YCW forward Michael Chaplin received a late bump that saw him knocked out. He kicked the goal as he was being bumped. YCW then got a secondary shot on goal which put them in front and saw them ultimately win. Edithvale-Aspendale will play Frankston YCW in the second semifinal this week after beating Bonbeach

convincing at Frankston Park on Sunday. The Eagles had contributors all over the ground with nine individual goal kickers, winning 12.8 (80) to 6.7 (43). Chris Wylie was the best player on the ground. It was Edithvale’s pressure around the football and strong work at stoppages that saw them get the job done against the Sharks. Bonbeach will now play Pines in a do-or-die First Semi Final. This week: Second Semi Final at Frankston Park on Sunday Seniors: Frankston YCW v Edithvale Reserves: Mt Eliza v Seaford Under 19s: Mt Eliza v Frankston YCW First Semi Final at Chelsea on Saturday Seniors: Bonbeach v Pines Reserves:  v Frankston YCW Under 19’s: v Edithvale-Aspendale

By Toe Punt ROSEBUD will play Sorrento for the second time in three weeks this Saturday in the second semi-final after beating Frankston comfortably in the Nepean Division Qualifying Final. Despite trailing by 30 points at quarter time, the Buds kicked 13 of the next 19 goals to record a 14.15 (99) to 12.8 (80) victory. There was a significant wind advantage to the Kars St end of Frankston Park, Rosebud kicking three goals against it and Frankston just one. It was Rosebud’s work rate and dare to take a risk that saw it boot two vital goals against the breeze in the third quarter, which ultimately won it the game. Frankston’s inability to break through the Rosebud press against the wind was significant. Kicking with the wind, the Bombers were able to use the likes of Nathan Lonie and Jarryd Amalfi to kick over the lines, however, against the wind, they just couldn’t penetrate. It again highlighted how strong Frankston was offensively, however, also exposed its inability to defend. This played into Rosebud’s hands, using its powerful, structured and disciplined team defence to lock the ball in its attacking half of the ground. Rosebud booted three goals in the first five minutes of the second quarter with accelerating ball movement, which clearly rattled the Bombers. The Buds had contributors and winners all over the ground too. Frankston did not. Dale Sutton was superb for Frankston and worked tirelessly, while Jason Kingsbury had 20-odd touches through the middle too. Ryan Marks-Logan held up in defence. It was an incredibly puzzling move by Frankston to play Allan Williams on Rosebud star Keegan Downie. Downie booted six goals and was one of his team’s best. We know Frankston like to free up the likes of Marks-Logan, Amalfi and Corey Buchan, but this was a coaching move that went incredibly wrong. In anyone’s book, you play your best defender on the opposition’s best forward. It was a move, or lack of one, that con-

tributed greatly to end the result. Rosebud dominated the ruck yet again, Ben Dwyer providing his smalls with first use of the footy, in the centre bounces and around the ground. Sean Downie, despite getting a lot of treatment, including off the ball, was simply exhilarating for the Buds, gathering 24 disposals and booting two goals, both of them sensational. Jake Corrin was superb also, his tackling a feature. He hurt his ankle in the third but should come-up this week. Best on ground was Jackson McRae, who completely dominated Frankston coach Beau Muston. Muston booted three goals, however, all three were lucky ones over the back after McRae attacked the footy. Mind you, two of Beau’s goals were 50m specials. Before the game it was always going to be a case of defence versus attack. The better defence usually wins finals. Frankston’s cause wasn’t helped when Sam Fox copped a cork early in the match and didn’t spend much time on the ground after that and Muston had his left hamstring iced and taped at the end of the game. The Bombers’ said it was precautionary but when the game was in the balance in the last, Muston was sitting on the bench! Hastings has beaten Red Hill in an Elimination Final for the second year in succession. The Hillmen were bundled out of the 2017 premiership race, 12.8 (80) to 5.10 (40). Shaun Foster was significant in the win with three goals while David Hirst kicked a couple. The Blues will tackle Frankston Bombers at Devon Meadows this Sunday. This week: Second Semi Final at Frankston Park on Saturday Seniors: Sorrento v Rosebud Reserves: Rosebud v Sorrento Under 19s: Somerville v Red Hill First Semi Final at Devon Meadows on Sunday Seniors: Frankston Bombers v Hastings Reserves: Red Hill v Frankston Bombers Under 19’s: Frankston Bombers v Sorrento

Wrapped up: Rosebud got to grips with Frankston in the Nepean Division Qualifying Final. Picture: Scott Memery